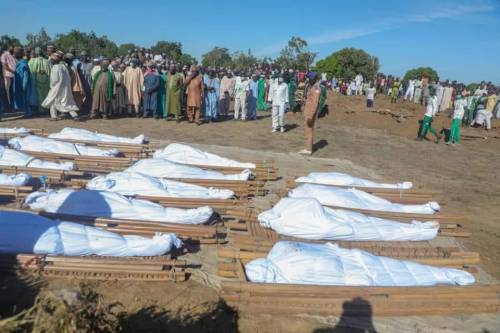 Following the killing of over 43 farmers on rice fields in Borno State, Nigerians on social media have called out President Muhammadu Buhari over the high rate of insecurity in the country.

They lamented the frequent killings of citizens by bandits, Boko Haram terrorists and kidnappers, accusing the President of failing to tackle the situation.

The Boko Haram terrorists had, on Saturday, killed over farmers in Kwashebe village, Jere Local Government Area of Borno State. The village is near Maiduguri, the state capital.

The terrorists were reported to have first tied up the farmers, who were working in rice fields, before killing them.

Reacting to this, some Nigerians said the recent attack was an indication that the Buhari administration had failed woefully in terms of security and welfare of citizens.

See some tweets below:

Under @GEJonathan, every Boko Haram killing was blamed on Jonathan. But under General @MBuhari, each Boko Haram attack is blamed on the service chiefs, Governors or others. The double standard has made some parts of Nigeria the worst place on Earth to live in

A mannequin is better than Buhari @MBuhari . Mannequin has it’s uses. Buhari has zero use. He is a parasite who has taken all his life and has never given.
When he is given anything, he ensures the next person never benefits. His only sense of achievement is having people down!

Buhari should be added to the dictionary as a synonym for betrayal.

This man is a total failure! Despite the amount of love and support shown to him in this region, he still doesn’t rate us.#ZabarmariMassacre

The first thing Buhari ought to have done today was appearing on TV, bearing the pain of the people he had failed, to announce the sack of his overstaying service chiefs. That wouldâve, at least, assured the people heâs not just reading cartoons in the Villa. #ZabarmariMassacre

Yes, the people deserve the government they get but don’t forget long after the tenure enlasped you re remembered for moments like #ZabarmariMassacre . My Dad for 1 will be heartbrokenHis Conviction for you to restore the already battered situation is on another level @MBuhari

As a respective citizen of nigeria and a northerner, i use this platform to urge @MBuhari to take actions over the recent killings on our brothers. Enough is enough. Either you take actions or resign. Allah ya jiqan musulmai ya bama iyalansu haquri #ZabarmariMassacre pic.twitter.com/AfiWel77mK