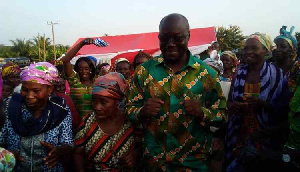 Ato Forson dancing with some of the widows

The aged and Widows of Ajumako-Enyan-Esiam constituency have told the Member of Parliament (MP) for the area Hon Cassiel Ato Baah Forson that should he continue with his good work, they are certain he will become a president of Ghana someday

They observed that the lawmaker has brought about unprecedented developmental to the area, envisaging he will in the near future become a Vice President or President of the country if he continues on that path.

Named as ‘Development Capo’ the women claimed his developmental works has transformed Ajumako-Enyan-Esiam consistency as well as changed lives, especially of women and youth.

Hon Ato Forson celebrated the Christmas with over 5,000 women made up of widows, the vulnerable and aged who were drawn from the deprived communities within Ajumako-Enyan-Esiam constituency.

Some of them broke who down in tears said if Ato Forson just as an MP has been able to transformed lives of people in the area, he can do more when elected as president of Ghana.

The annual activity that took place in nine communities saw ranking member of finance committee, Ato, dance with the vulnerable women with “sweet mother” song amid shaking of hands with them and later presented half piece of cloth to all the 5,000 women as part of festive season.

He indicated that most people love Christmas but not everyone gets to enjoy the day as much as they would like it so he decided to put smiles on the faces of the aged and widows.

To him, mothers are too special so there is the need for everyone to respect mothers, adding “you can rain all sorts of insults on me and go free but I will not spare you if you insult my mother”.