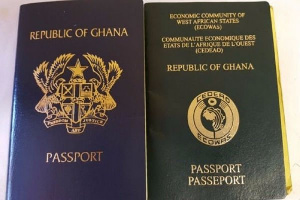 Passport of the Republic of Ghana

Ghanaian passport is really not a force to reckon with when talking about travelling beyond the African continent, according to new research by Henley Passport Index 2020.

Japan holds the title as the 2020 most powerful passport in the world.

Traveling outside the continent is infamously difficult for African passport holders, citizens of Ghana have visa-free access to only 65 countries in the world.

Currently, Ghana has the 78th strongest passport in the world and 16th in Africa.

In the 14 years that Henley & Partners have tracked the world’s passports (using data from the International Air Transport Association and its own research as a residence and citizenship consultancy), Ghana keeps having an unsteady score.

The strongest African passport belongs to the Seychelles, with Mauritius and South Africa ranked second and third.

Seychellois have visa-free access to 137 countries in the world.

According to the latest ranking by Henley & Partners, citizens of the Seychelles have the most travel freedom in Africa while Somalia has the least powerful passport. The rankings are based on the number of countries passport-holders can visit without a visa.

The Seychellois passport strength may be due its openness as a visa-free country, with no requirements for any traveler wishing to visit.

African countries have suffered the biggest decline as a bloc, accounting for 19 of the 27 biggest fallers in the past decade.