Thousands gathered for the Women’s March in Washington to protest the Supreme Court nomination of Judge Amy Coney Barrett and the Trump administration.

“The first Women’s March in 2017 was historic,” Rachel Carmona, executive director of Women’s March, said in a rally before the march Saturday afternoon in Washington, D.C. “Now four years later … with 17 days to go (until the election), we’re going to finish what we started.”

The march in Washington was planned to culminate at the National Mall where organizers hoped to hold a virtual text banking telethon to send 5 million text messages to encourage people to vote. March organizers said they planned to honor the legacy of Supreme Court Associate Justice Ruth Bader Ginsburg and contest Amy Coney Barrett’s confirmation to the court, which the Senate Judiciary Committee is expected to vote on Oct. 22.

“We are the hell and the high water. Donald Trump is leaving office, and there is no choice for him,” Sonja Spoo, director of Reproductive Rights Campaigns at women’s advocacy group UltraViolet, said at the rally. “Come Nov. 3, it will because of women – especially Black, brown and Indigenous women – stepping up and saying enough.” 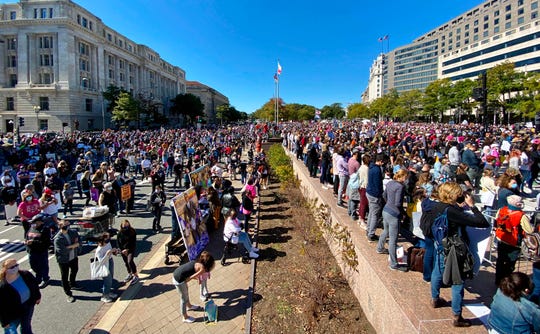 Women’s March said all participants would be required to wear a mask and social distance and that hand sanitizer would be available. The organization requested that participants not travel to D.C. from states on the district’s quarantine list.

Meanwhile, the Independent Women’s Forum, a conservative American nonprofit, hosted its second-annual “March for All Women” counter-protest. This year’s event, called the “I’m With Her!” rally, took place near the Supreme Court to support Barrett’s nomination. The in-person rally would be limited to 100 people due to COVID-19 safety measures but would also be livestreamed, according to the forum.

“We believe Amy Coney Barrett bottom line should be treated with respect,” Carrie Lukas, president of the Independent Women’s Forum, said to the crowd, according to the livestream. “She is a great American, and you’ll find out what that means as she stands up for all of us.”

The first Women’s March on Jan. 21, 2017, was the largest single-day protest in U.S. history, according to the Crowd Counting Consortium. That day, the crowd estimator pegged nationwide participation in the 650-plus sister marches at 3.3 million to 5.3 million. 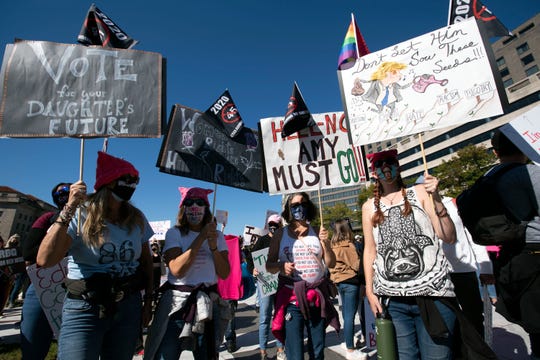