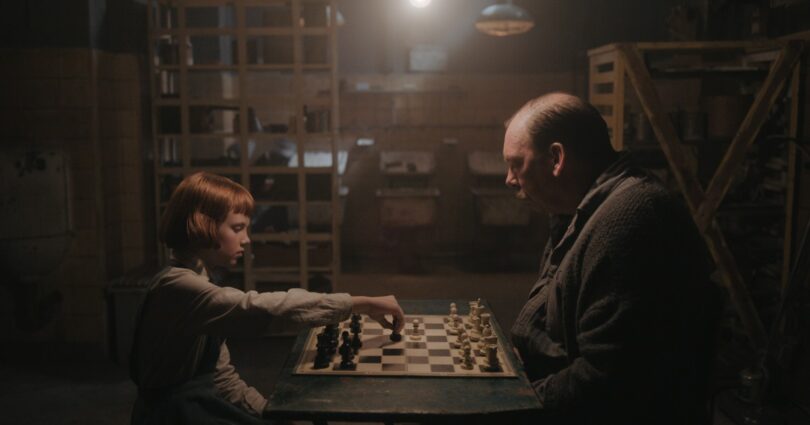 The Netflix chess epic “The Queen’s Gambit” has entered the stage of cultural ascendency in which people choose via Buzzfeed quiz or personal inclination which character “you are.” Sexy Benny (“Love Actually’s” Thomas Brodie-Sangster), the chess cowboy who thinks for five minutes or so that he is better than prodigy Beth Harmon (Anya Taylor-Joy)? Loyal Harry (“Harry Potter’s” Harry Melling), who realizes early on that he isn’t even close and loves Beth anyway? Or super cool Jolene (newcomer Moses Ingram), the fellow orphan turned law student/civil rights activist who needs to have a series of her own?

I’ll tell you who I am. I’m the girl who lost to Beth in the first round at the local tournament and then gave her a Kotex pad in the ladies room.

Actually, the character has a name, Annette Packer (Eloise Webb), and she shows up again a few episodes later to deliver a short but pivotal speech about how important it was to have been beaten by Beth because it proved that girls could do great things. It’s the 1960s — as evidenced by Beth’s Cleopatra eyeliner and kicky hat — the same decade when real-life child prodigy turned troubled but brilliant grandmaster Bobby Fischer was giving the United States one more weapon in its Cold War arsenal by beating Russians on his way to the world championship.

In 2020, the message about the value of seeing a woman win in a man’s world may seem a bit obvious (and given the whiteness of virtually everyone involved, limited) — but to its everlasting credit, “The Queen’s Gambit” is not about that. Aside from a few sexist comments from a few minor characters, the series examines a personal journey toward greatness in which the lead character happens to be female.

Still, it’s tough not to wonder how many lives would have been different if there had been a Beth Harmon, actual or fictional, at the time of Fischer’s rise. Including mine.

Like thousands of other kids, I learned to play chess during the Fischer boom, the craze that grew around his ascent to world champion in 1972. When I was 7 or 8, my father bought a chess set and taught me how to play. He was nowhere near as good a player as Beth’s mentor, orphanage janitor Mr. Shaibel (Bill Camp), but he was good enough to teach me how to play strategically and aggressively. And, like Mr. Shaibel, he offered me books that would advance my ability to play, some of which I actually read.

For four or five years, I played a lot — with my dad, with his friends and then with schoolmates and my fifth grade math teacher. Mr. Goetz kept a chess board on his desk and was always happy to play a bit between classes or after school. For a minute, I had fantasies of being that kid who could play seven games at a time and win all of them, but two obstacles quickly became apparent: I did not have the natural ability or dedication to advance beyond “Look, a 10-year-old who can actually play chess!”

And I was a girl.

Neither Fischer nor any of his opponents, Russian or otherwise, was female.

Obviously, there are many girls and women who do not need cultural validation to become champions or experts in their field; if that were the case, we’d have no female champions or experts in most fields. Nona Gaprindashvili became the first female grandmaster in 1978, and many other women have achieved that title since. But although both Susan Polgar (who became a grandmaster in 1991) and Iriana Krush (a grandmaster in 2013) have played for or lived in the United States, there has never been a U.S.-born female grandmaster, much less anything approaching a female Fischer.

It’s impossible to overstate the effect Fischer had on American chess — so large and so lasting that in the universe of “The Queen’s Gambit,” Fischer does not exist. His historical dominance would have loomed too large over Beth’s fictional quest; she is his replacement, down to the cultural excitement generated by her rising career. As Liz Garbus chronicles in her terrific 2011 documentary “Bobby Fischer Against the World” (which Netflix or HBO Max really needs to pick up pronto, as it is currently available only on YouTube), the prodigy from Brooklyn captured the country’s attention from age 14, when he won the 1957 U.S. Chess Championship. By the time he beat Boris Spassky to win the World Championship in 1972, he was an international celebrity, showing up on “The Tonight Show Starring Johnny Carson” and the cover of every national magazine.

Garbus loved “The Queen’s Gambit” — the performances and the way the series captured the “edge-of-your-seat excitement that chess held at that time,” she says, though it took her a few minutes to adjust to an American chess that did not include Fischer.

“I kept wondering if they were going to mention Bobby or Spassky,” she says. “It was tough for me to imagine chess during the Cold War without Fischer.”

Fischer’s rise gave the United States one more arena in which to compete with the Soviet Union, where, as “The Queen’s Gambit” makes clear, chess was taken as seriously as pro football is in the U.S.

“It was a kind of cultural propaganda,” Garbus says. “We don’t live in that kind of bipolar world any more.” At least not internationally, though the current political divide comes close. “[What] we have in American politics right now is a bit like the emotion surrounding the Cold War — you can imagine how amazing it was to see someone from your side kick someone from the other side in the butt.”

It’s no wonder then that the relatively handsome and charming Fischer became a fixture on the talk show circuit and why between national pride and the growing influence of celebrity, chess became a craze — the way running did after Frank Shorter won the gold in the marathon at the 1972 Olympics and cycling did after the 1979 hit movie “Breaking Away.”

Like Beth, Fischer had demons; but unlike Beth, who continually worries whether she is mentally ill, Fischer actually was. Increasingly angry, paranoid and extremely anti-Semitic, he punctuated his world championship by withdrawing from the world and from chess. He refused to play publicly for 20 years — including in 1975, when he famously lost his title as world champion by default; he simply did not show up to defend it in a match against Anatoly Karpov. When Garbus read Fischer’s obituary in 2008, she was shocked to discover there had never been a documentary about the rise and fall of his career.

It was soon after Karpov’s default victory that I stopped playing chess for anything more than occasional fun. The charm of being exclaimed over as a girl who knew how to play gave way, in my early teens, to an attitude that was at best patronizing — “you’re pretty good for a girl.” More than that, though, it was the miraculous and misleading use of the word “prodigy,” so often applied to Fischer, that proved my biggest obstacle. I liked the idea of being a prodigy, but I thought that meant possessing some God-given ability that not only transcended hard work but also actually precluded it.

And after I stopped playing, I forgot all about chess.

I mean literally. It was weird how completely I had forgotten all those hours hunched over board or book — and my brief dreams of greatness — until I watched “The Queen’s Gambit.”

Even though I knew going in what the series was about, I didn’t connect it with myself until the scenes in which Beth learns how the pieces move, becomes familiar with the names of the basic openings. Then, in a sudden rush like you read about amnesiacs experiencing, it all came back — a child’s thrill when she realizes that she knows what she is doing, that she is playing with intent, rather than merely reacting to her teacher’s moves. The joy of finally winning after all those early losses — honestly, is there a more satisfying word in the English language than “checkmate”? — and the intoxication of being asked by an adult, “How’d you do that?”

Where had all those memories and sensations gone for so many years?

Beth Harmon, already an outlier in many ways, was built to not care or even take much notice of the judgmental looks she gets when she takes on a high school chess club made up entirely of young men. That she has been fed a steady diet of tranquilizers only partly accounts for her preternatural calm, just as it only partly accounts for her ability to gaze at the ceiling and work through an endless stream of strategies and scenarios, to learn how to play the game in her head, to live and breathe chess.

Fischer, like Beth, was eccentric — so sensitive to sound that during the world championship, he insisted the sound of the cameras was distracting him and moved his games to a small storage room — but for Garbus, it is difficult to imagine a grandmaster who is also an addict. “The brain fog of addiction is very incompatible with being a chess master.” (While “The Queen’s Gambit” captures perfectly “the obsession and all encompassing nature of those who give themselves to the game,” Garbus adds, “I never found anyone as stylish and chic [as Beth] — things like grooming were not much of an issue.”)

Watching “Bobby Fischer Against the World” makes it clear how much of Beth was influenced by Fischer’s life, down to her late arrival at an important match that opens the show. But even after decades of learning about — and in some cases meeting — extraordinary groundbreaking women, of knowing that there is nothing a man can do that a woman can’t (often better), I was filled with a very specific sense of wonder and gratitude while watching a female character master a thing that, despite no small amount of effort, I could not.

And who knows how many women of my generation once had the actual potential to be chess champions? Who knows what might have happened if they’d had the chance to be inspired by even a fictional female Bobby Fischer? A grandmaster-in-the-making who got her period in the middle of a match and won anyway. Who acted up and acted out and made terrible mistakes but who was respected and even loved because of the rare talent she possessed.

That certainly did not seem possible in chess, or pretty much any other arena during the 1970s, ’80s or ’90s, when women who achieved or even aspired to greatness continually had to prove that the journey did not come at the cost of their “femininity.”

I don’t want to spoil “The Queen’s Gambit” any more than I have, but its most beautiful aspect is its willingness to grant its central character everything she has earned, even as it shows us how very difficult that earning can be. Intuitive brilliance will take you only so far; the deciding factor of genius is always dedication.

I loved “The Queen’s Gambit” so much, I watched the final episode three times. Then I went and found the chess set my father bought to teach me how to play; the box was dusty, dented and torn, but all the pieces were right where I had left them.

Rating: TV-MA (may be unsuitable for children under age 17)