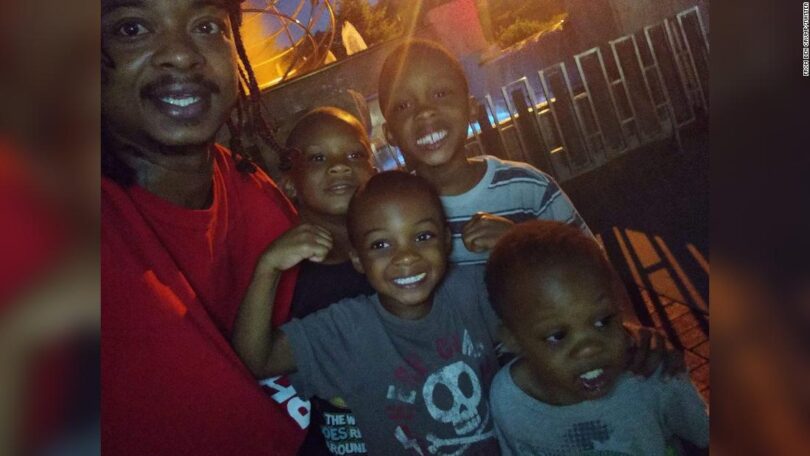 “They’re the future of my family, so if you don’t take into account their psychological wellness and the wellness of the whole situation going down that road — it’s a long way to go down that road,” he told CNN. “Educationally, socially — there’s a lot of things that we have to make sure that they’re OK for.”

It will be a long road, indeed, experts say. If Dr. Cheryl Singleton Al-Mateen, the medical director at the Virginia Treatment Center for Children, were treating the 3-, 5- and 8-year-old boys, she’d call a clinical psychologist — perhaps her colleague, Leslie Kimball — and they would take measures to ensure the children felt safe, they say. It’s a vital first step in rest of the children’s lives.

“The impact of trauma is known to be a significant factor (in future health), especially as they stack up in childhood development,” said Al-Mateen, also a professor of psychiatry and pediatrics at Virginia Commonwealth University.

How the trauma manifests will depend on the resources they receive. When children experience high levels of adversity, it affects their developing brains and increases the likelihood they’ll engage in high-risk behavior, according to pediatrician Dr. Nadine Burke Harris. Yet even if traumatized children do not engage in such behavior, they remain at greater risk of deadly diseases, she said during a TED Talk in 2014, a few years before she became California’s surgeon general.

The brain’s stress response system governs the body’s fight-or-flight instinct. If someone saw a bear in the forest, for example, the brain would release stress hormones in preparation to fight or flee the bear, Burke Harris explained. The heart pounds, pupils dilate and airways open.

“And that is wonderful — if you’re in a forest, and there’s a bear,” she said, “but the problem is what happens when the bear comes home every night and this system is activated over and over and over again. … Children are especially sensitive to this repeated stress activation because their brains and bodies are just developing.”

To be clear, neither Al-Mateen nor Kimball has treated Blake’s sons, but they know trauma is cumulative, no matter whom it afflicts. If the boys experience more trauma or they’re not placed on a trajectory to healing, their chances of dying from a host of deadly diseases and conditions begin to multiply, the experts said.

“If these kids don’t get the support and attention, or continue to be exposed to trauma, the more they veer off that trajectory,” said Kimball, who also teaches psychiatry at VCU.

Amber Carr works hard to keep her 9-year-old son, Zion, on the right trajectory. He’s doing OK, she said, “but he does have his moments when he does need that extra attention.”

Zion suffers from post-traumatic stress disorder. In October, Carr’s sister, Atatiana Jefferson, was babysitting the youngster, who was 8 at the time. They were playing video games, one of their favorite pastimes, when Fort Worth, Texas, police arrived, responding to a concerned neighbor’s call about doors being open at Jefferson’s home.
Jefferson, 28, heard something and grabbed her gun. Officer Aaron Dean did not identify himself as police. He demanded, through the window, that Jefferson show her hands before opening fire, killing her, bodycam footage shows.

At first, Zion blamed himself, his mother said. Jefferson had burned some hamburgers she was cooking for them, and he helped her open doors to air out the house. Early conversations involved his mother “trying to make sure he understood that it’s not his fault,” Carr said.

He attended counseling sessions twice a week after his Aunt Tay’s killing. The sessions have been less frequent — and conducted via Zoom — since the pandemic, Carr said. The family refrains from using the words counselor or therapist, opting instead for mentor, “to normalize the situation a little,” she said.

Zion used to catch his mother crying. At first he would comfort her, but as weeks went on, seeing her weeping would upset him.

“I don’t show it as much in front of him. I try to do it behind closed doors,” Carr said. “I don’t want to trigger something inside of him.”

An intelligent tyke, Zion is not easily fooled. Even when his mom is not crying, he can tell when something’s amiss, she said. He started acting out on occasion. He’d show defiance, slam a door or lock himself in his room. He’d call from school and say he didn’t want to be there. Carr would pick him up, sometimes as often as twice a week, until truancy issues arose. Zion’s mentor tells Carr never to use her sister’s killing as an excuse for Zion’s behavior, she said.

“He’s just being a typical kid, but it’s on a different spectrum,” she said. “I try to explain to Zion that he’s not the only one experiencing something. He was there, but it affected everyone.”

Zion’s gotten better over 10 months, though he’s grown weary of virtual schooling. His mother has embraced a new role as activist, and while she leaves him home when she attends national rallies — including this week’s March on Washington — he accompanies her to local protests. Zion recently led his first rally and looks forward to the next. He casts his mission as one to “save the fun aunties,” his mom said.
He doesn’t talk much about the day police killed his aunt, but he talks about trips they took or games they played. Carr doesn’t broach Blake, George Floyd and other recent violence because she can barely absorb it herself, she said.

“If it’s overwhelming to me, I can only imagine what it means to him to hear about another incident,” she said.

‘What the hell is in this well?’

Millions of Black kids are experiencing various levels of trauma. By one estimate, almost 35 million American children have adverse childhood experiences. They’re dubbed ACEs and include suffering abuse and witnessing violence. Experts say Black and Hispanic children are more prone to suffer these sorts of traumatic events.
This is on top of research showing the “toxic stress” of depressed socioeconomic conditions can stunt African American children’s physiological functioning and a 2018 study finding police violence harms the mental health of African Americans at large — part of a phenomenon known as racial trauma.

“How (are the children) going to live with this psychological scar of their father being paralyzed by the people who are supposed to protect and serve them?” he asked.

Earlier this month in Aurora, Colorado, police drew guns on Brittany Gilliam, her daughter, sister and two nieces in a mix-up over a stolen car. No shots were fired, but the African American mother told CNN that she and the kids are traumatized.

ACEs come in many forms, community violence just one, and they affect every strata of society. One US government study suggests child maltreatment costs the United States about $124 billion in one year alone, enough to cover every dollar spent by the US Department of Education last year.

Other ACEs include bullying, disaster, terrorism, displacement, abuse, neglect or loss of a loved one. A caregiver’s struggle with substance abuse or mental illness can also traumatize a child, as can divorce and domestic violence.

In her TED Talk, which has been viewed more than 7.5 million times, Burke Harris said 67% of Americans had experienced at least one ACE, while 1 in 8 had four or more. The pediatrician likened treating ACEs to treating disease.

“One of the things that they teach you in public health school is that if you’re a doctor and you see 100 kids that all drink from the same well and 98 of them develop diarrhea, you can go ahead and write that prescription for dose after dose after dose of antibiotics, or you can walk over and say, ‘What the hell is in this well?'” she told the audience.

Trauma is that well, according to the Adverse Childhood Experiences Study, Burke Harris said, describing a “striking” correlation between ACEs and future health. As the ACEs accumulate, so do the risks of hepatitis, chronic obstructive pulmonary disease, depression and suicidal ideation.
With seven or more ACEs, Burke explained, the lifetime risk of lung cancer or ischemic heart disease triples. Cancer and heart disease killed 1.25 million Americans in 2017 — more than 31 times the number who died that year from firearms.

‘They’re wondering if they’ll be shot’

With kids like Blake’s, making them feel safe is key to taking the next steps in their treatment, Kimball, the clinical psychologist, said.

“You can’t process trauma when you’re still in the middle of it,” she said.

Traumatized kids may be angry, jumpy, nervous, on edge or consumed by what they saw, the National Child Traumatic Stress Network says. Older kids may be more prone to carry weapons or get high. They may also struggle with trust, or worry a sibling or loved one will be hurt, according to the NCTSN.

“Seeing a parent shot, they’re wondering if they’ll be shot,” Al-Mateen said. “That child had that assumption. That’s terrifying.”

The tonic for ACEs are benevolent childhood experiences, or BCEs, research shows. They include surrounding a child with love and a support system — whether it’s relatives, teachers or a religious community — as well as keeping them away from news and other negativity, experts say. Nutrition is important as well, Al-Mateen said.

“You take care of the body, then try to fix the mind,” she said.

What you tell a 3-year-old differs from what you tell an 8-year-old, Kimball said, and it’s important for therapists to learn what the child understands about the violence she or he witnessed. Let them talk through their fear, she said. Answer their questions.

Remind them of their blessings — their mother or grandparents who were unharmed, for instance — and find comforting toys, activities, food or TV shows, while chipping away at their feelings of despair, disorientation or being overwhelmed. Normalize their world, Al-Mateen explained.

“Your world will be different,” she might tell the children, “but we’re going to make it as much the same as we possibly can.”

“Do your best to assuage fears, but be realistic,” she said. “You can’t keep them in a bubble, but you also don’t want to retraumatize them.”

If children want to visit a father recovering from gunshot wounds, the family should make them aware of his condition, Kimball said. Explain that their dad might be sleeping, or he might not be able to talk.

“Daddy’s going to be hooked up to some machines, and that’s to help him get better, but they’re not hurting him,” Kimball might tell children in Blake’s sons’ position.

A social worker, psychologist or psychiatrist with expertise in trauma will know how to deal with nightmares or flashbacks and provide the child coping tools. If the child is old enough, a doctor might explain the toll untreated stress takes on their body.

Younger children may engage in “play therapy” in which they draw or play with toys and talk about how to help the toy or the subjects of their art, Al-Mateen said.

At some point, recovery requires “exposure work,” Kimball said. The child will need “guided, supportive exposure to the memory of the trauma” to integrate parts of the memory, normalize it and deprive it of its intensity, she said.

With Zion, Amber Carr has tried to tick many of these boxes, she said, though the mother of two concedes she hasn’t attended counseling herself.

“Our parents are our models for how to handle life and emotions,” Kimball said. “It’s important for parents to have resources as well.”

Carr feels she could use more resources, but she’s doing her best while juggling activism and her work as a cosmetologist, she said. Zion is surrounded by family and others who love him, and he’s forged a bond with one of his cousins. He seems on the mend, but Carr isn’t sure she’s doing enough, she said.