What’s on TV: Anne Hathaway in ‘The Witches,’ ‘Borat’ sequel 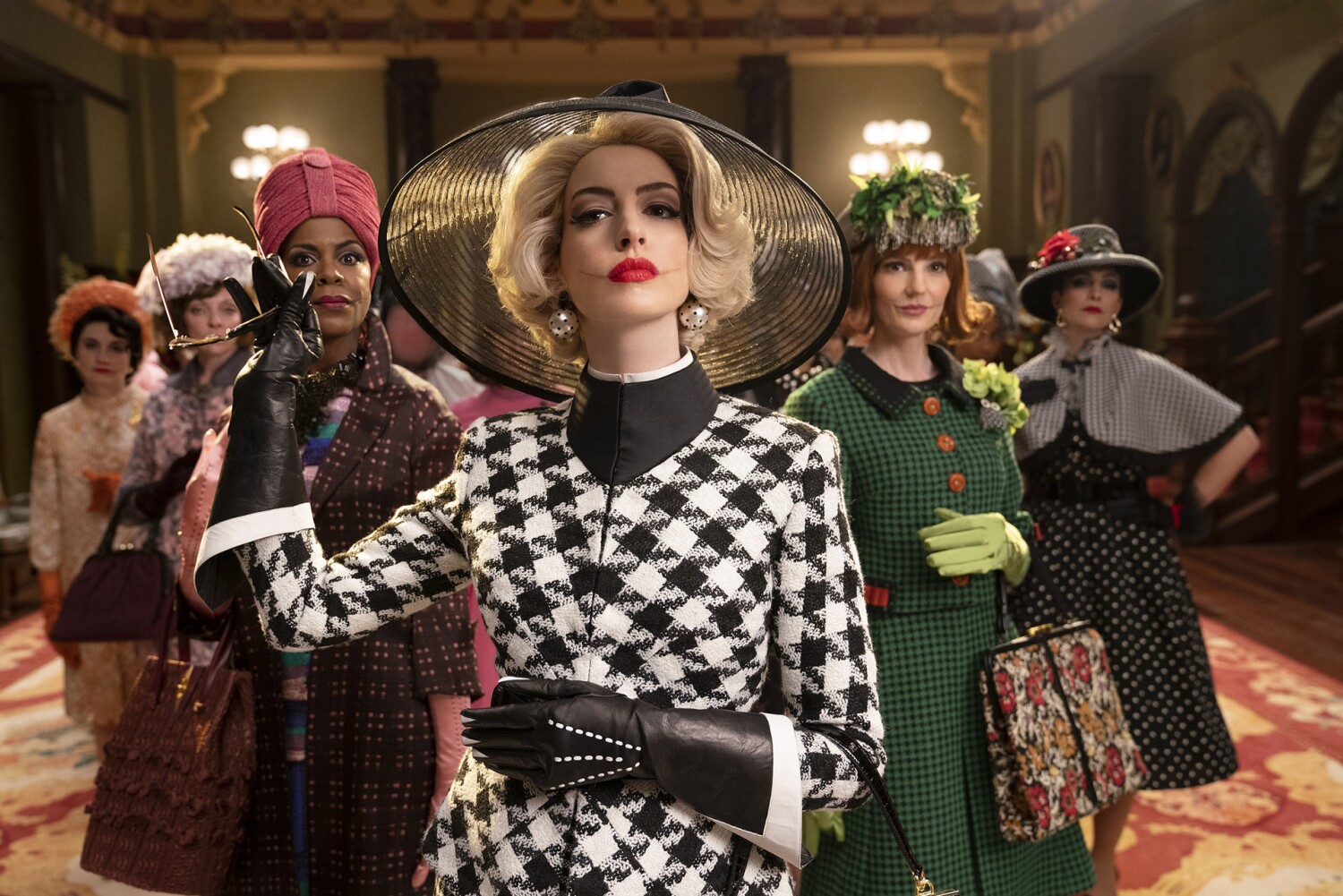 Nancy Reagan is the next former FLOTUS profiled in a new episode of the docuseries “First Ladies.” 7 and 10 p.m. CNN

They’ll be rolling in the aisles in a reboot of the classic game show “Supermarket Sweep.” “SNL’s” Leslie Jones is the host. 8 p.m. ABC

“The Simpsons” gets into the Halloween spirit with a new edition of its annual “Treehouse of Horror” anthology. 8 p.m. Fox

Gossip girl: A woman (Dawn French) spills the tea about the residents of her quaint English village in the drama series “The Trouble With Maggie Cole.” 8 p.m. KOCE

“Who Is Killing the Cheerleaders?” That’s the mystery a high school teacher tries to solve in this thriller. With Ella Cannon. 8 p.m. Lifetime

You are now leaving “Lovecraft Country.” This sci-fi/fantasy drama set in the 1950s comes to the end of the road. With Jurnee Smollett and Jonathan Majors. 9 p.m. HBO

The new docuseries “Seduced: Inside the NXIVM Cult” covers much the same terrain as “The Vow,” which offers its finale. 9 p.m. Starz; 10 p.m. HBO

Update! The reboot of “Unsolved Mysteries” is back with a new batch of episodes — and hopefully, some updates on past cases. Anytime, Netflix

Gwen Stefani rejoins “The Voice” as one of the mentors on a new cycle of the singing competition. 8 p.m. NBC; also Tue.

“Alias” star Jennifer Garner is the guest on the season finale of “Tell Me More With Kelly Corrigan.” 9 p.m. KOCE

See how a seemingly harmless cartoon frog was reappropriated as a symbol for the alt-right in the documentary “Feels Good Man” on the return of “Independent Lens.” 10 p.m. KOCE

It’s 10 p.m. Do you know where your ballot is? “Frontline” looks into accounts of voter fraud, voter suppression, etc., ahead on the November election in the new episode “Whose Vote Counts.” 10 p.m. KOCE

Kim Kardashian West, Robert Downey Jr., Dave Chappelle and the lovely and talented Lizzo are Dave’s guests in Season 3 of “My Next Guest Needs No Introduction with David Letterman.” Anytime, Netflix

A blushing bride lives in the shadow of her new husband’s late wife “Rebecca” in a remake of the Hitchcock thriller based on the Daphne du Maurier novel. With Lily James, Armie Hammer and Kristin Scott Thomas. Anytime, Netflix

“The Goldbergs” returns with a double-length episode, followed by the season premieres of “The Conners” and “black-ish.” 8, 9 and 9:30 p.m. ABC

What’s black and white and adored all over? “Nature” has the answer in the new episode “Pandas: Born to Be Wild.” 8 p.m. KOCE

Get a piece of the rock! “Nova” explores NASA’s unmanned 2016 mission to a near-Earth object in the new episode “Touching the Asteroid.” 9 p.m. KOCE

It all came down to “537 Votes” in Florida, as detailed in this documentary about the 2000 presidential election. 9 p.m. HBO

Those extensions are evil — evil, I tells ya! — in “Bad Hair,” a new horror tale from “Dear White People” creator Justin Simien. With Elle Lorraine and Vanessa Williams. Anytime, Hulu

Who’s the Boss? The documentary “Bruce Springsteen’s Letter to You” follows the veteran rocker as he records a new album with the stalwart E Street Band. Anytime, Apple TV+

Movers and shakers from the contemporary dance scene strut their stuff in the new docuseries “Move.” Anytime Netflix

Bill Murray and Rashida Jones have a series of daddy-daughter misadventures in Sofia Coppola’s new comedy “On the Rocks.” Anytime, Apple TV+

He’s cool: Olaf from Disney’s “Frozen” gets an origin story in the animated tale “Once Upon a Snowman.” Anytime, Disney+

An adventurous young girl is literally “Over the Moon” after building her own rocket ship in this animated fantasy. With the voices of John Cho, Sandra Oh and “Hamilton’s” Phillipa Soo. Anytime, Netflix

A Cold War-era chess prodigy (Anya Taylor-Joy) holds her own in a male-dominated field in the drama series “The Queen’s Gambit.” Anytime, Netflix

A former figure skater chills with a hunky hockey player in the holiday romance “Christmas on Ice.” With Abigail Klein and Ryan Cooper. 8 p.m. Lifetime

First comes love, then comes marriage as “Ready to Love” returns followed by the debut of reality series “Put A Ring on It.” 9 and 10 p.m. OWN

Filmmaker Alexandra Pelosi presents a snapshot of our politically divided nation in the documentary “American Selfie: One Nation Shoots Itself.” 9 p.m. Showtime

A nebbishy New Yorker turns his lens on his fellow citizens in the quirky docuseries “How to With John Wilson.” 11 p.m. HBO

Strike up the band! The special “HBCU Homecoming 2020: Meet Me on the Yard” is a live celebration of America’s historically black colleges and universities. 5 p.m. YouTube Originals

A reporter tries to find out if a millionaire philanthropist is naughty or nice in the new TV movie “Christmas Unwrapped.” With Amber Stevens West and Cheryl Ladd. 8 p.m. Lifetime