Home » What We Can Learn From These Famous Failures In Life 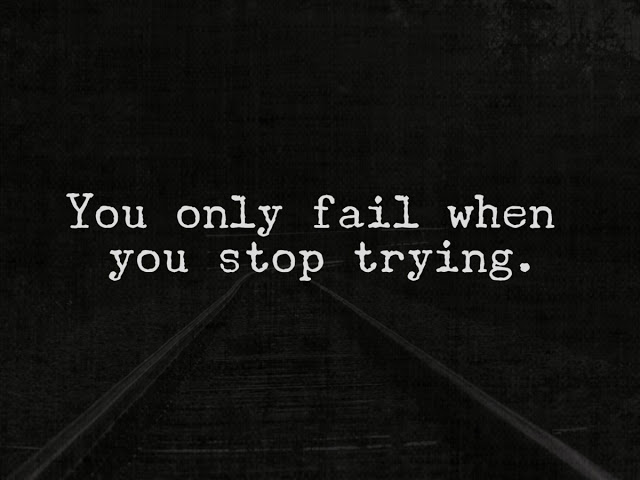 These famous failures were ordinary people who did not inherit any wealth but rather had a life full of failures and difficulties. They saw failure simply as an opportunity to begin again, this time more intelligently. But the commonality among them was that they were not afraid of failures. In spite of all the difficulties, they never gave up on what they ultimately wanted to achieve in life and today, these famous failures are among the most inspiring people on earth.

When Einstein was young, his parents and teachers thought he was mentally handicapped. He didn’t speak till he was four and didn’t read till seven. His grades in school were so poor that a teacher asked him to quit, saying, “Einstein, you will never amount to anything!” He was slow and anti-social and eventually expelled from school and was refused admittance to the Zurich Polytechnic school. He was the only one in his graduating class unable to get a teaching position because no professor would recommend him. One professor labeled him as the laziest dog they ever had in the university.

His earlier setbacks did not stop him from winning the Nobel Prize in Physics in 1921. After all, he believed that “success is a failure in progress.” To this day, his research has influenced various aspects of life and has helped shape the world in a progressive way.

Abraham Lincoln is the mythical, towering figure of American history, and whatever one thinks of his accomplishments, he was indeed a fascinating character. Born into poverty, Lincoln was faced with defeat throughout his life. He lost eight elections, twice failed in business and suffered a nervous breakdown. Rather than taking these signs as a motivation for surrender, he refused to stop trying his best and later on, he became one of the greatest presidents in the history of the United States of America.

A common list of the failures of Abraham Lincoln is:

1843- Defeated in run for nomination for U.S. Congress

1856- Defeated in run for nomination for Vice President

Lincoln never gave up on his dreams but rather used his failures as a stepping stone to achieving the highest office in the United State of America. One of his inspiring quotes was, “some achieve great success, is proof to all that others can achieve it as well.”

J. K. Rowling is the author of the Harry Potter Series, which has sold millions of copies around the world and many other books, most notably, Fantastic Beasts and Where to Find Them.

She began writing about her now-famous character, the young wizard Harry Potter, and received loads of rejections from book publishers when she first sent out the manuscript. As the year progressed following her mother’s death, Rowling experienced the disappointment of a broken marriage and the ensuing struggle as a single parent, trying to support herself and her daughter on welfare. Battling depression, unemployed and without money, she admits to having considered suicide.

Despite numerous setbacks, she found solace in doing what she loved most-writing. Through hard work and determination, she became the first female billionaire author.

Walt Disney suffered through many fits of anger and depression through his many trials. Yet he learned from each setback, and continued to take even bigger risks which combined with the wisdom that experiencing failures can provide, led to fabulous financial rewards.

Walt Disney started his own company in 1920 at the age of 19, drawing cartoons of the creatures from his childhood. At the same time, he had so little money to pay the rent, being forced to live with friends and often going without food. He failed to sell a single cartoon.

At the age of 22, he went bankrupt after the brutal failure of a cartoon series in Kansas City. He went bankrupt several times. He also wanted to become a Hollywood actor but it never happened. He was fired by a newspaper editor who accused him to be lazy and lacking imagination and creative ideas.

Walt Disney’s life and work show the value of imagination and dreaming big. But he also showed us that it’s not enough to have big dreams. Hard work and persistence were the keys to overcoming the obstacles in his path, as they are for so many others who have overcome even the most seemingly insurmountable odds. One of his inspiring speech says;

“If you can dream it, you can do it. We keep moving forward, opening new doors, and doing new things, because we’re curious and curiosity keeps leading us down new paths.

All our dreams can come true if we have the courage to pursue them. The way to get started is to quit talking and begin doing.”

Michael Jordan is perhaps the greatest NBA player of all time. He was easily the most popular sports star and he became a household name and a hero to many young, aspiring athletes and ambitious individuals. Now recognized as a surprising winning record scorer, it was a failure that spurred Michael to strive for the best.

The story of Michael Jordan not making his high school team has been told and retold and continues to inspire with each retelling. The facts are these: In 1978, sophomore Michael Jordan tried out for the varsity basketball team at Laney High School. When the list was posted, Jordan’s name wasn’t on it. Instead, he was asked to play on the junior varsity team.

It was a perfectly logical choice for the coaches to assign Jordan to the junior varsity team for his sophomore year. But 15-year old Jordan was devastated when the list was posted without his name. In his mind, it was the ultimate defeat, the ultimate failure. “I went to my room and I closed the door and I cried. For a while, I couldn’t stop. Even though there was no one else home at the time, I kept the door shut. It was important to me that no one hear me or see me.” Jordan was heartbroken and ready to give up the sport altogether until his mother convinced him otherwise.

After picking himself up off the floor, Jordan did what champions do. He let his failure and disappointment drive him to be better. He played on the junior varsity team, and he worked himself to the limit. “Whenever I was working out and got tired and figured I ought to stop, I’d close my eyes and see that list in the locker room without my name on it, and that usually got me going again.”

It became a pattern throughout Jordan’s life that a disappointment or setback resulted in a redoubling of effort. High school rival player Kenny Gattison, who led his team to beat Jordan’s team for the high school state championship, put it this way: “You got to understand what fuels that guy, what makes him great. For most people the pain of loss is temporary. Jordan took that loss and held on to it. It’s a part of what made him.”

Before launching Microsoft, Bill Gates was a Harvard University dropout and co-owner of a failed business called Traf-O-Data, a computerized machine for processing paper tapes from traffic countries.

He learned from his mistakes and failures and went on to build what became the world’s largest software company. As Bill Gates said, “it’s fine to celebrate success, but it is more important to heed the lessons of failure.”

Henry Ford is one of the most renowned entrepreneurs in history. He optimized transportation and forever changed the United States automobile industry. His innovative manufacturing process produced low-cost, reliable vehicles, while simultaneously keeping his workers well-paid and loyal.

Before his success, Ford encountered failure during the initial production of his first automobile. But it was these early failures that taught him valuable lessons and sparked his future success.

His first company, The Detroit Automotive Company was dissolved by the board of directors because Ford couldn’t get his product fine-tuned enough to sell and after a year and a half of tinkering, he still had nothing to show for his work. The project was short-lived and a failure in the eyes of the industry. The second time he left because he resented the interference of his primary investor.

With a tarnished reputation and no financial backers, Ford was in a bad spot. Alexander Malcomson became his financial backer after looking for an unconventional backer who wouldn’t interfere with his work. Hence the establishment of Ford Motor Company.

The article, Be Like Henry Ford: Apprentice Yourself In Failure is an interesting read in itself. The author reveals something interesting from the article. It noted that:

There are two kinds of failure. The first comes from never trying out your ideas because you are afraid, or because you are waiting for the perfect time. This kind of failure you can never learn from and such timidity will destroy you. The second kind comes from a bold and venturesome spirit. If you fail in this way, the hit that you take to your reputation is greatly outweighed by what you learn. Repeated failure will toughen your spirit and show you with absolute clarity how things must be done.

What’s important to notice is Ford’s perseverance and ability to overcome setbacks. He learned from his mistakes(failures) and used what he learned to become successful.

Oprah was born to an impoverished teenage mother and suffered from abuse at the age of 9. She ran away from home at the age of 13, only to become pregnant at 14 and lose her first child.

Despite her challenges and failures, she did not give up and with determination, she became the richest self-made woman and only black female billionaire.

Considered as one of the greatest inventors of his time, Thomas Edison’s numerous innovative ideas and creations are legendary. He held more than 1,000 patents, some refinements of previous inventions but many completely new ideas.

Edison is famous not only for his outstanding success but also for his attitude toward failure. His teachers considered him to be “too stupid to learn anything.” He was named “non-productive” by the first two companies he worked for and got fired.

Thomas Edison’s inventions have been a transforming and a regenerative agency in people’s lives. Through his inventions, the world has been shaped for human progress. He is the epitome of impact and without him, the world wouldn’t be what it is today.