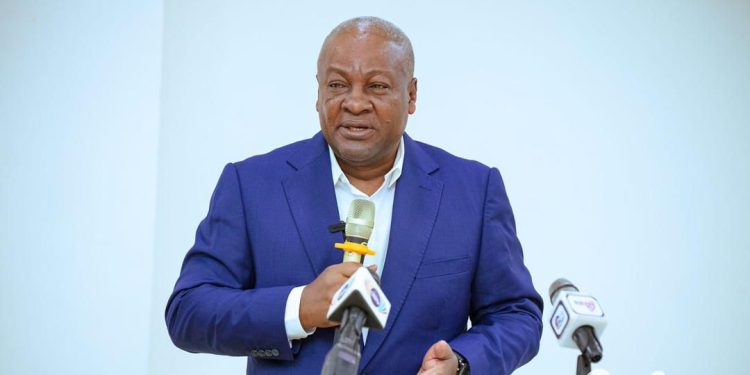 Former President John Dramani Mahama says the National Democratic Congress MPs will not support the approval of any new loans that do not have specific terms or purpose.

This comes on the back of the $1 billion syndicated loan presented to Parliament.

Delivering a speech at a closing ceremony of a retreat for Minority Group MPs at the Volta Serene hotel in Ho on Sunday, July 17, 2022, the former President said Ghana is in an economic hole, and it will not be prudent to continue digging with more loans.

”We do not believe that the existence of crisis permits even more reckless decision-making. All decisions and policy choices made at this critical juncture could offer relief or exacerbate our problems and make recovery extremely difficult. We are in a massive hole and, and we do not need further digging.”

The 2022 budget noted an international financing programme to raise at least $750 million, with an option to increase it by a further $750 million for budget support and liability management.

Although the budget captured $750 million, a $1 billion loan agreement is currently before the House.

At a Finance Committee meeting on Thursday, the Minority stalled the approval processes owing to what they call the discrepancies between the loan presented to the house and what has been presented to the committee for consideration.

A Ranking Member on the Committee, Cassiel Ato Forson said “the budget is saying that, in the course of the year, they will be taking a term loan of $750 million. Why do you ask us to approve $1 billion?”

Reacting to the development, Mr. John Mahama insisted that until the terms of the $250 million loan component are renegotiated to make them “favourable” and same captured in subsequent budgets, the Minority MPs will not support its approval.

“Our position on the $250 million component remains unchanged, as such unfavourable terms as the $40 million insurance payment and total interest of over $80 million make it too expensive and inimical to the economic interest of Ghana. It is also not programmed in the 2022 budget statement.”

On the $750 million component, Mr. Mahama noted that after he raised concerns, some effort has gone into renegotiating the costs and terms, which now appear more favourable.

He is however unclear on the exact purpose of the loan.

Mr. Mahama said the NDC will only support its approval if ”evidence of its use for specific growth-related projects leading to improvements in the lives of people is presented.”