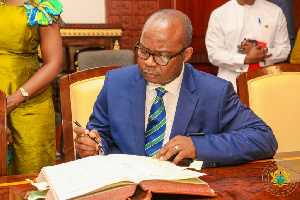 The Bank of Ghana has stated that the introduction of the new higher denomination banknotes it issued recently was the result of a well-thought-out currency restructuring programme.

This follows claims by former President John Dramani Mahama that it did not follow proper procedure in introducing the new notes to the country’s currency mix.

The former President who was speaking at the 38th Anniversary celebration of the 31st December Revolution at Winneba, in the Central Region, said, “We say we are moving towards a cashless economy, we say that you cannot clear GHS5,000 off the counter because we want people to use less cash in transactions and then at the same time you go and print GHS100 notes and GHS200 notes. You cannot understand what reason in hell would make any government thinking logically do something like that. You want to make it easier for people to carry huge sums of cash when we say we are building a cashless society.”

But in a statement issued on Saturday, January 4, 2020, the Bank of Ghana justified the introduction stating that, the challenge of carrying large sums of money for economic transactions was returning and thus it had to review the structure of existing currencies.

“The Bank of Ghana went through its standard processes to introduce the new denominations with integrity as it is to be expected. The features of the new notes were unveiled at the launch. This is to avoid counterfeiters and other challenges associated with the issuance,” the statement noted.

“Twelve (12) years after the redenomination of the cedi, high inflation and depreciation of the currency have eroded, in real terms, the face value of the existing series of banknotes. The deadweight burden of carrying large sums of money for economic transactions was returning, with the phenomenon of carrying currency in plastic bags. As is the normal practice in all jurisdictions, Central Banks undertake periodic reviews of the structure of existing currencies,” it further noted.

It also reacted to a comment by the former President that the introduction of the new notes was done on the blind side of Ghanaians, saying that it had embarked on various sensitization programmes to educate the public.

“Immediately after the launch, the Bank embarked on intensive public education which is still ongoing to ensure the effective dissemination and use of the new coin and banknotes. Unlike a major currency reform exercise such as the redenomination exercise (a complete replacement of notes), which required several months of public education, this new denominations were a simple exercise, maintaining the principal features of existing notes, complementing rather than replacing existing notes and involved a gradual easing of the new denominations into circulation. Indeed, only a limited quantity was put in circulation in the first month of the launch,” the statement noted.

The Central Bank in November 2019 introduced GH¢100 and GH¢200 notes as well as a GH¢2 coin as additions to the country’s currency denomination mix.

This was announced by the Governor of the Central Bank, Dr. Ernest Addison at a press conference in Accra.

Whereas some Ghanaians have praised the central bank for the new cedi notes, others have also taken on the BoG over the new currency notes describing it as unnecessary.