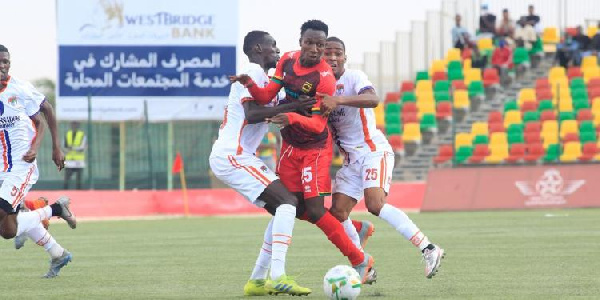 Kumasi Asante Kotoko have arrived home after their 1-1 draw against Mauritanian side FC Nouadhibou over the weekend.

The Porcupine Warriors touched down in Accra on Monday afternoon and are set to move right into camp to prepare for the reverse fixture on December 6.

Kotoko who are two-time champions of the competition are hoping to qualify to the Group Stages of the tournament this year but must first go past Nouadhibou over two legs.

The results in Mauritania on Sunday was Kotoko’s third draw of the season (both the domestic league and Champions League) but they are hopeful they can record their first victory come Sunday, December 6.

In the game against Nouadhibou which officials of Kotoko have described as fraught with refereeing bias, head coach Maxwell Konadu made few changes to the side that drew against Berekum Chelsea at the Golden City a week ago. Kwame Baah started in post.

The Porcupine Warriors drew first blood of the game through Osman Ibrahim in the early stages of the game.

FC Nouadhibou came into the game stronger after going down and created decent chances in search of an equalizer. Kwame Baah made some saves to deny them.

Yusif Mubarik conceded a penalty when the ball appeared to hit his hands on the 22nd minutes. Tanji stepped up and converted nicely to draw them back into the game.

The Kotoko officials protested the penalty decision and a video of the decision has surfaced on social media.

Below is a video of the penalty call. Watch below.