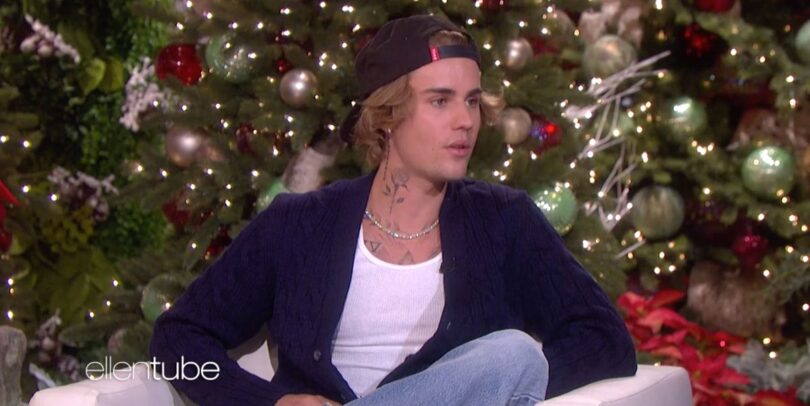 Ellen DeGeneres had Justin Bieber on her first show of the December holiday season, and the line of questioning was truly cringe-inducing at moments. Justin handled it as well as he could and remained relatively stoic, but his discomfort was visible, particularly when Ellen asked whether his wife Hailey really cooked their Thanksgiving turkey and what the “holdup” was on him and Hailey having kids.

Hailey had boasted about cooking her first turkey on Instagram, which Ellen brought up during the interview. Justin went on to explain friends brought dishes as well, and “I have a chef too, which I’m really blessed about, to have.”

Ellen then asked Justin point-blank, “So did Hailey cook that turkey? Or did your chef cook it, and she posed with it?”

“Uh, no, Hailey actually did cook that, yeah, yeah, yeah,” Justin said, trying to laugh it off.

Ellen then talked about Justin’s tattoos before transitioning into a string of very personal questions about his family plans with his 24-year-old wife of two years.

“How many kids are you going to have and when?” Ellen started.

“I’m going to have as many as Hailey is wishing to push out,” Justin said. “I’d love to have myself a little tribe. But, yeah, it’s her body and whatever she wants to do.”

“Does she want a lot?” Ellen asked.

“I think she wants to have a few,” Justin responded.

Then Ellen asked her most invasive question yet: “What are you all waiting for? You know you love kids. You’re so good with kids. What’s the holdup?”

Justin Bieber’s face when Ellen asked him what the “holdup” on him and Hailey having kids is.

“Thank you for saying that,” he started on the kids compliment, before pausing and carefully thinking out his wording on his response to her question. “I think the issue—There’s not really an issue, but I think Hailey still has some things she wants to accomplish as a woman. And I think she just wants to—yeah, I think she just is not ready yet, and I think that’s okay.”

Ellen then did a complete 180 with her tone, telling the Biebs, “I think that’s fantastic. You know what? I was hoping that was the answer. I know how much you love kids, and you’re going to be a such great dad, but I think that’s so important. How old is she?”

“She should wait until she is ready and get everything done she wants to get done,” she said.

You can watch the full interview here, and see how Justin reacted during the more awkward moments: