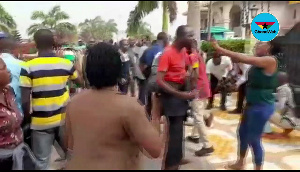 Customers of Menzgold Ghana Limited who besieged the house of the company’s CEO Wednesday morning were furious when warning shots were fired from the house.

The customers stormed the CEO of the Company, Nana Appiah Mensah’s Trassaco residence to demand their locked-up funds.

Instead of NAM1 coming out to speak to them and calm them down as they expected, the customers who had gathered from various parts of the country were greeted with three warning shots.

The angry customers failed to run as they heard the shots, insisting they were ready to die with Nana Appiah Mensah.

Some of them went further to throw stones at the gate whilst their leaders tried to calm tempers.

Personnel from the Ghana Police Service arrived at the scene shortly after this, leading to the customers running in different directions to avoid arrest.

Some of them, however, were arrested and have been sent to the Accra Regional command.

Addressing the media, the police said the customers were arrested because they made an unlawful entry into a private residence and embarked on unlawful demonstration because they didn’t seek permission from the police.