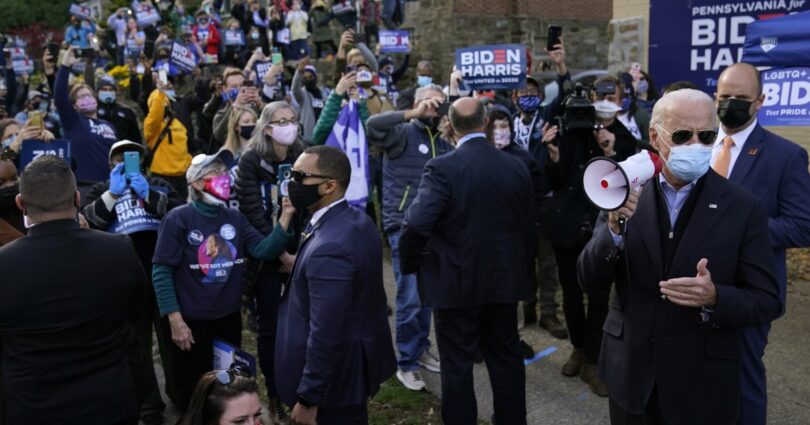 Voters flocked to the polls as President Trump, challenger Joe Biden and their running mates pressed their cases Tuesday in a flurry of final campaign appearances that closed a contest like no other.

Polls closed at 7 pm Eastern time in Georgia, South Carolina, Virginia, Vermont and much of Florida.

Earlier in the day, after a visit to his hometown of Scranton in the battleground state of Pennsylvania, Biden dropped into a traditional election-day soul food lunch in Philadelphia.

“Philly is key!” he told a gathering of local politicians.

Trump stopped by his campaign headquarters in the Virginia suburbs outside Washington, D.C., and also called into “Fox & Friends,” a favorite sounding board. He repeated his baseless claim that ballots postmarked on election day were illegitimate if counted past midnight.

“It’s a very dangerous thing to be waiting, and we’re waiting,” Trump said.

Despite widespread fears of election-related violence, the voting has gone peacefully. Scattered reports showed some incidents of targeted misinformation and other mischief aimed at keeping voters from the polls, but those did nothing to dampen enthusiasm on a day many had circled in red ink.

Total voter turnout is expected to surpass records in many states and perhaps nationwide. Even before the polls opened Tuesday, more than 100 million Americans had cast their ballots in person or by mail ballot, a measure of the enthusiasm on both sides and precautions some took to avoid the risk of COVID-19.

To ensure every one of those votes is counted, a federal judge ordered the U.S. Postal Service to sweep their facilities for outstanding ballots and rush the delivery of any that were found.

Voters were waiting outside polling places nationwide even before the sun rose; the lines they formed could be measured in terms of football fields, or city blocks.

Sisters Rubria Toscano, 74, and Martha Melcher, 67, waited three hours at a community center in Henderson, Nev., just outside Las Vegas, to cast their ballots for Trump.

“We voted, we used our voices,” said Melcher, who wore a bright red fedora, where she proudly placed an “I Voted” sticker.

Kamaria Brooks, 40, waited months until she felt it safe to fly home from Houston, where she has sheltered during the COVID-19 pandemic. The Biden voter went straight from John Wayne Airport to her polling place in Irvine.

“I refused to miss today. I need my voice to be heard,” said Brooks, who was clad head-to-toe in Black Lives Matter regalia. “There’s a lot of stuff that impacts me and my community.”

The presidential election was conducted under an extraordinary shadow — a deadly pandemic, economic collapse, racial upheaval — that gave heightened urgency to the quadrennial rite.

Biden, making his third try for president at age 77, was the frontrunner in polls. But memories of four years ago, when surveys showed Trump behind Hillary Clinton, prevented any premature celebration by Democrats.

The president, looking at a narrow but not implausible path to a second term, has suggested he might declare victory on the basis of partial returns. Asked Tuesday how and whether he would react, Biden told reporters, “I don’t feel a responsibility to respond.”

The former vice president, who planned to watch the returns at home with his family in Wilmington, Del., said he was not certain whether he would have anything to say in public Tuesday night.

“If there’s something to talk about tonight, I’ll talk about it,” Biden said. “If not, I’ll wait until the votes have been counted the next day.”

Trump planned to spend election night in the family quarters of the White House before possibly dropping by a gathering of supporters in the East Room.

For all the fears of armed intimidation, marauding militias and other election day violence, law enforcement officers and election monitors reported nothing out of the ordinary.

Misdirection and misinformation occur in every election. But there was heightened concern this time, owing to Russia’s interference in the 2016 election and efforts by Trump to undermine confidence in the vote by, among others things, making false claims about voter fraud and the illegitimacy of mail-in ballots.

In North Carolina and several other states, there were reports of anonymous phone callers telling people to “stay home and stay safe.” State election officials alerted the FBI and the Federal Election Commission.

In Michigan, voters in Republican-leaning Grand Rapids received phone calls wrongly stating they could be arrested for casting a ballot if they had an outstanding warrant. In Flint and Dearborn, which lean Democratic, residents received text messages falsely warning of a printing error that required Biden supporters to fill in the Trump bubble on their ballots and suggesting long lines required waiting until after Tuesday to vote.

The Michigan attorney general’s office urged people not to be duped. “Do not fall for it, it’s a trick!” one tweet read.