Use due process to resolve election differences 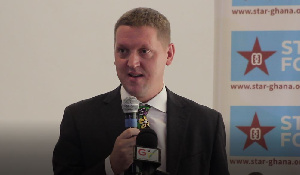 The British High Commissioner to Ghana, Mr Iain Walker, has advised political parties in Ghana to resort to the use of the law to resolve their differences before, during and after the general election in 2020.

While appreciating measures by the government and other relevant state institutions to ensure peaceful and violent free elections, he, said the impact of those measures would not be felt without the devotion of political parties to those initiatives.

“The events of the Ayawaso West Wuogon earlier this year were surprising to many of us and troubling in equal measure, and have no place in a modern democracy like Ghana,” he stated.

Mr Walker was speaking at the launch of the election 2020 project by the Star Ghana Foundation in Accra last Tuesday.

Under the project, $9 million will be disbursed as grants to 23 Civil Society Organisations and three media firms in support of initiatives that are aimed at promoting inclusiveness, peaceful and issue-based campaigns in the upcoming general election.

Funded by the Star Ghana Foundation with support from the Department for International Department (DFID), Danish International Development Agency (DANIDA) and the European Union (EU), the election 2020 project is divided into three components, namely the strategic, managed and local components.

The 26 projects to be undertaken by the grantees comprise 11 projects, funded under the strategic component, 10 under the local or community component and five under the managed component.

The strategic component will be managed at the national level, engaging election management bodies and the political parties around issues of credible elections while the local components will take place at the community or districts level.

The managed component, on the other hand, will be implemented by the Ghana Broadcasting Corporation (GBC)/National Commission on Civic Education (NCCE), Media Foundation for West Africa and the Ghana Centre for Democratic Development (CDD) in the area of presidential debates, monitoring of media reportage and voter registration, respectively.

Mr Walker said Ghana had a good record of holding peaceful and transparent elections and also resorted to the law to resolve election disputes as witnessed in the 2012 elections.

He pointed out that electoral violence did not only harm innocent citizens but also had the tendency to ruin the country’s “hard fought and well earned reputation, globally”, adding that the United Kingdom would continue to do its part to promote credible and acceptable elections at all times.

He said active citizens’ participation in all stages of the electoral process provided the basis for holding duty bearers accountable.

“For a foundation whose mission and aim is to support the strengthening of active citizenship, we believe supporting citizens to participate in elections will be one of the steps to achieve this objective”, he added.

The Deputy Chairman in charge of Operations for the National Commission for Civic Education (NCCE), Mr Samuel Asare Akuamoah, appealed to the grantees to pay more attention to the marginalised groups in the society, particularly women and the disabled, in carrying out their projects.