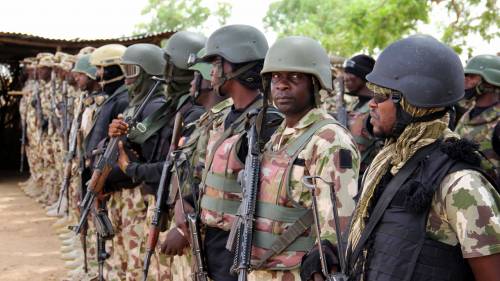 Grace Abdul, a journalist with the Voice of America, has narrated her ordeal in the hands of Nigerian Army operatives, who illegally arrested and detained her for hours in Oyigbo, a community in Rivers State.

Abdul was arrested on Saturday by soldiers, who were enforcing curfew in the community.

The journalist, who spoke with SaharaReporters after her release, said she had barely started her work when the soldiers assaulted and arrested her.

According to her, the soldiers described journalists as ‘enemies of the state and enemies of Nigeria’.

Abdul said: “I just started and first picture I took was of the burnt police station. The soldiers came in immediately and said I was snapping them. They abused me and assaulted me.

“They (Soldiers) held me for over five hours before allowing me to go. They said we are enemies of the state and enemies of Nigeria.”

The journalist stated that the soldiers asked her to apologise but she insisted that she had done nothing to warrant an apology from her.

She alleged that the security agents wanted their activities in the community to go unreported, hence, her arrest.

Oyigbo community has been tensed following a reprisal attack by the military.

The Nigerian military claimed that some members of the Indigenous People of Biafra attacked security posts as they stole weapons, killed some security personnel and burnt police stations.

The government had claimed that six soldiers and four policemen were killed in Oyigbo.

Under the guise of arresting the perpetrators whom the military claimed lived in Oyigbo, troops were deployed to the community and they embarked on killing spree and arrest of people, mainly young men.

The activities of the military was aided by the curfew declared by Governor Nyesom Wike, who immediately invaded the community.

Some residents, who spoke with SaharaReporters, said soldiers shot at unarmed villagers with the intent to kill while arresting anyone, who attempted to confront them or was lucky enough to escape being killed.