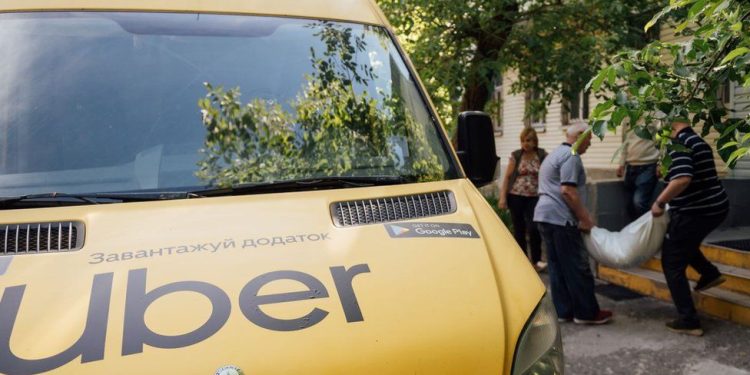 Uber has built a “private-label” version of its delivery platform to help the United Nations deliver food and water supplies to war-torn areas of Ukraine.

The tech firm is working with the UN’s World Food Programme (WFP).

It’s difficult for large delivery trucks to access some parts of Ukraine because of structural damage and the threat of attack.

Uber’s platform enables the WFP to co-ordinate a fleet of smaller vehicles.

The WFP is hand-picking its own drivers and vehicles, but some are former Uber drivers who worked in Ukraine before the Russian invasion.

Uber boss Dara Khosrowshahi said his firm had given the WFP “their own private-label Uber”.

It’s a bespoke version of the Uber Direct delivery platform which is available commercially – big name customers include Apple and Tesco. Usually, businesses pay Uber a commission per delivery for the service, but the WFP is not being charged.

It can use the software to co-ordinate distribution, and track deliveries and drivers within a 100km range of its warehouses.

The scheme is being trialled in the central city of Dnipro. The hope is that it will be rolled out later across four other cities: Lviv, Vinnytsia, Kyiv and Chernivtsi.

There are a number of aid organisations working to provide emergency supplies to those in need, including the Red Cross, the International Rescue Committee and Save the Children.

Uber’s platform was up and running within a few weeks of its first contact with the World Food Programme.

“It’s not like you can wait a month to get food to people – people have got to get food immediately,” said WFP executive director David Beasley.

“You can’t go a few weeks without food, and so using Uber’s technology, their distribution systems, their dispatch systems… it really is a great success story.”

Uber has had a turbulent few years. Its ride-sharing service was hit hard during the pandemic as people stayed at home, and the firm has been forced to reform its driver policies, giving them better workers’ rights.

The move into deliveries has, however, been a success – Mr Khosrowshahi says that when he first became CEO in 2017, Uber’s delivery arm was in its infancy, but it is now poised to become the firm’s biggest service.

In 2021, 96% of Uber’s delivery orders were for restaurant food. It was also the first year in which the 13-year-old firm reported a profit.

“I ultimately think that delivery can be bigger in scope because it’s not just about food. It’s groceries – and also empowering any local merchant to try to out-Amazon Amazon,” said Mr Khosrowshahi.

“If Amazon can deliver next day, your local merchant can deliver in the next hour or two hours… people want delivery of everything at home as quickly as possible, and we can ride that wave.”