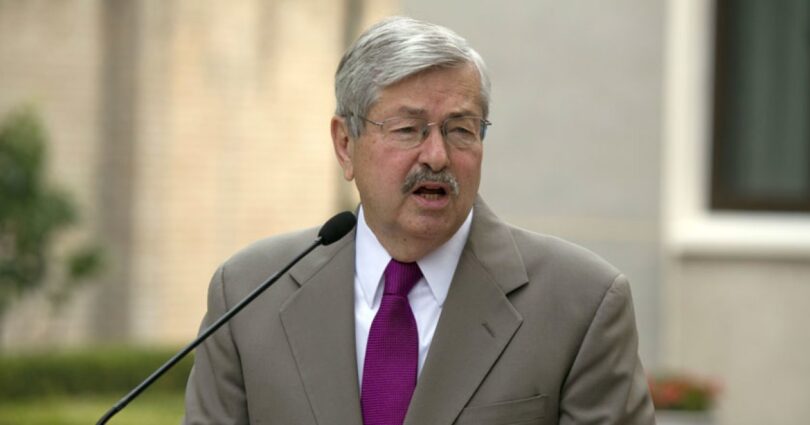 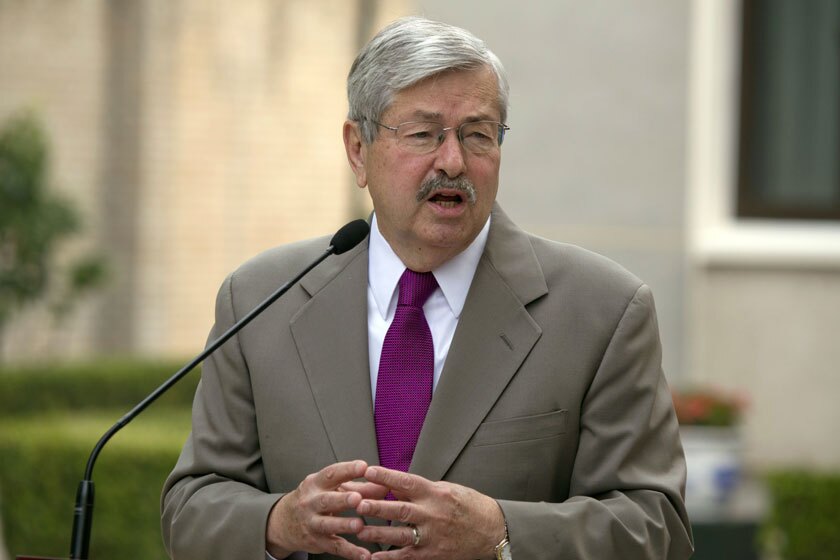 U.S. Ambassador to China Terry Branstad announced Monday that he will retire from his position and return to the United States by early October, a departure that comes amid extreme political and diplomatic tension between the U.S. and China.

He confirmed the decision to President Trump by phone last week, according to a statement from the Embassy in Beijing, and will return to Iowa, where he previously served six terms as governor. No successor has been announced.

The reason for Branstad’s departure was not immediately clear. However, President Trump said in a phone call shared via Twitter on Sept. 12 to Joni Ernst, a Republican senator for Iowa who is currently running for reelection, that Branstad was returning to the U.S. to campaign. The move seemed to come as a surprise to China’s foreign ministry, which told the Associated Press on Monday afternoon that they had not heard the ambassador was leaving.

Last week, Branstad submitted an op-ed to the Communist Party’s official newspaper People’s Daily in which he argued that U.S. companies, journalists, diplomats and civil society are blocked from the same access to China that the United States provides to their Chinese counterparts.

He called for “unrestricted engagement and uncensored discussion” between Chinese and American people, pointing to Chinese Ambassador Cui Tiankai’s access to the public in the United States.

When the People’s Daily rejected the op-ed, calling it “full of loopholes and seriously inconsistent with facts,” the U.S. embassy published the op-ed in Mandarin on its Chinese social media accounts. It was quickly censored.

Secretary of State Mike Pompeo called the incident a demonstration of “the Chinese Communist Party’s fear of free speech and serious intellectual debate” in a statement last week.

Also last week, the only two Australian journalists working for Australian media in China returned to Sydney after state security police showed up at their doors past midnight, forbidding them from leaving the country and demanding that they submit to questioning.

The Australian Embassy in Beijing and consulate in Shanghai offered assistance and shelter to the two journalists, then negotiated on their behalf to secure their departures from China after they agreed to police questioning.

Cheng Lei, a Chinese-born Australian citizen working for Chinese state TV channel CGTN, has also been detained for a month. Cheng had disappeared for several weeks with little information about her whereabouts or charges until last week, when China’s foreign ministry confirmed that she was arrested on national security grounds.

Branstad’s departure may or may not be related to political tensions, but is likely to heighten the sense of vulnerability among American citizens living in China.

The State Department has warned that U.S. citizens in China could be subject to exit bans, arbitrary detention and prolonged interrogations, as well as detention or deportation “for sending private electronic messages critical of the PRC government.”

A key part of the current U.S.-China dispute over “reciprocity” is centered on journalist access. China expelled all U.S. journalists working for the New York Times, Washington Post, and Wall Street Journal earlier this year. Several dozen Chinese journalists are meanwhile waiting for visa renewals in the United States. China’s foreign ministry has announced a pause on press visas for American outlets until the Chinese journalists’ visas are renewed.

Last week, a U.S. State Department spokeswoman also said that they had revoked the U.S. visas of more than 1,000 Chinese nationals under a presidential proclamation issued in May blocking entry of Chinese students and researchers with alleged military connections.

Branstad was appointed by President Trump and arrived in Beijing in June 2017. He was governor of Iowa when Chinese President Xi Jinping, then a lower-level official, visited his state in 1985 with a delegation learning about farming technology.

Xi made a point of visiting Iowa once again when he was vice president in 2012, where he told a group of Iowans: “You were the first group of Americans I came into contact with. To me, you are America.”

Branstad was also present then, and told Xi that he was a “great friend of Iowa,” according to local newspaper the Muscatine Journal.

Years later, Iowa became one of the farming states both critical to electoral support for President Trump and directly impacted by the U.S.-China trade war. Branstad’s personal connection with Xi from his Iowa days did not seem to play a significant public role in trade negotiations or in tempering hostilities between the two countries.