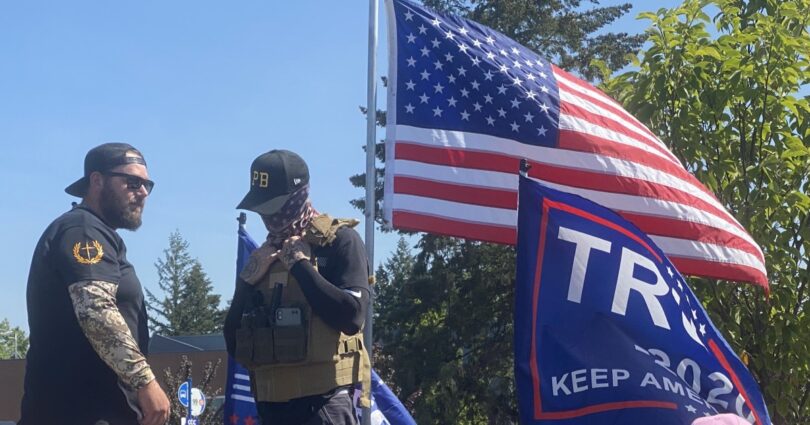 Right-wing extremists in Oregon accompanying a car caravan of several hundred supporters of President Trump on Monday drove from a Portland suburb to Salem, the capital, where some members of the group brawled with left-wing activists.

The clash, which apparently did not result in any serious injuries but led to at least two arrests, was the latest between Trump supporters in Oregon and protesters who oppose police brutality and racially motivated violence.

Confrontations between the opposing sides — at times affiliated with Proud Boys or Black Lives Matter — in Portland resulted in the Aug. 29 fatal shooting of a follower of a Proud Boys-aligned right wing group, Patriot Prayer.

At the start of the caravan near Portland, a Proud Boys leader portrayed the organization classified as a hate group by the Southern Poverty Law Center as a fraternal association providing security for Trump events.

Several hundred Trump backers and supporters of law enforcement had gathered in the parking lot of a community college in Oregon City, southeast of Portland, for the truck caravan.

Many in the crowd wore T-shirts commemorating Aaron “Jay” Danielson, a follower of the right-wing Patriot Prayer group who was fatally shot in Portland Aug. 29 after participants in a truck caravan clashed with left-wing protesters. Organizers of Monday’s “Oregon for Trump 2020 Labor Day Cruise Rally” kept their route secret, but said they wouldn’t stray into the city as happened last time.

Taking an unusually public stance, a leading figure in Proud Boys, a group that has repeatedly brawled with antifa activists in Portland and other cities, used the festive kickoff gathering as a public relations opportunity, trying to put a kinder face on the organization. He said the group was a fraternity of men of various races and backgrounds, many of them Christian.

“If you have not had an opportunity to meet a Proud Boy, it’s a good time to do it, because we are here for you, we have always been here for you,” Flipp Todd, the organization’s Portland vice president, told caravan participants during a short talk that elicited cheers. “We’ll continue to fight for you if you ever need security, we always make a wall for you guys to make sure that your events are safe.”

Joey Gibson, founder of Patriot Prayer, also spoke in memory of Danielson, saying “he’s not a victim, and we’re not victims.”

Portland is a city on edge after Danielson’s killing and the fatal shooting by a federal fugitive team in Washington state of Michael Forest Reinoehl, the man suspected of gunning him down. Black Lives Matter protesters marked their 100th night of demonstrations Saturday with a march that was blocked by police who unleashed tear gas after Molotov cocktails were thrown.

Much of the city is peaceful, with protests occurring in limited areas outside police precincts and government buildings. Residents jogged, picnicked and barbecued Monday just like any other Labor Day — aside from businesses closed and restaurants operating under coronavirus restrictions.

But many in Portland say that while they share the desires of protesters for social justice and reform, they are appalled at the protest violence and disturbed by the increasing presence of right-wing activists.

“The protests have been hijacked by groups that don’t have anything to do with Black Lives Matter,” said Michel McDonald, 74, a Black retired military pilot. He said that while he spent 20 years in the military “so that people could have rights like free speech,” he felt that the Trump rally was dangerously provocative, given the recent violence.

Mike Lindberg, a progressive community leader and former Portland city council member, said that the nightly scenes of people starting fires and throwing objects at police officers have become fodder for the Trump campaign. “The people might as well be wearing a MAGA hat if they’re going to damage things in Portland and injure police officers,” said Lindberg, who is white.

He said that city leaders had failed to set limits on acceptable behavior and to direct police to use undercover officers to separate agitators from peaceful protesters. At this point calling in the National Guard would be best, said Lindberg, 79, who added that it pained him to say it given his memories of Guard troops fatally shooting Kent State University antiwar protesters in 1970.

Mac Smiff, an advocacy journalist who participates in the protests, objected to editorial writers and white community leaders deeming that demonstrations should stop. Protests will continue as long as demands have not been met for an initial $50 million in police department budget cuts, changes in policing and other reforms, said Smiff, who is Black.

“We are not going home, because the problem is bigger than it ever was,” Smiff said. “You have a Democratic governor and mayor allowing an alt-right terrorist group to come down here and assist police.”

Lakayana Drury, executive director of Word is Bond, a Portland nonprofit organization that develops leadership skills in young Black men, said he was disappointed to find that tolerance for protests had worn thin in a famously progressive city. The Trump rally further dismays Black residents, he said.

“For people of color, seeing a Trump flag can come off in a threatening way,” said Drury, who is Black.

But at the caravan start, participants said their point was to promote unity.

“You always have extremists on both sides,” said Lauri Berg, 51, who is white. “We’re trying to help unify the country in a common message of prosperity and moving forward.”