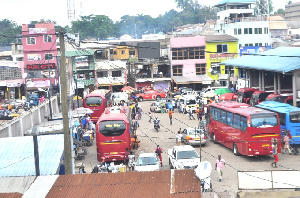 The cost of transporting foodstuff coupled with the high cost of housing in the capital Accra, among other factors, have been blamed for making the city the most expensive in Ghana.

An analysis of the Ghana Statistical Service’s data on inflation for 2019 shows that Greater Accra was the most expensive region for consumers over the past 12 months.

The country’s statistical agency which collects data on the changes in prices of food and non-food items last week Wednesday released its December 2019 data which showed that inflation in Greater Accra stood at 12 percent, while the overall national average was 7.9 percent.

Beyond the general movement of prices in December last year, a simple calculation of the average changes in prices of goods and services over the past 12 months indicated that the Greater Accra region’s 10.3 percent in all of 2019, was the highest in all the traditional ten regions measured.

Government Statistician, Professor Samuel Kobina Annim sharing the key drivers of inflation for December 2019 and most of the past year stated:

This means food inflation is still dominant as a contributor to inflation in the country. Followed by this are housing and transportation. When you put these two together they contribute about a 3rd to our inflation.”

On his part Economist and Senior Lecturer at the University of Ghana Dr. Ebo Turkson, said the development was not surprising.

“You normally expect inflation to be high in cities like Accra. We don’t grow agricultural products here so food has to be transported, and transportation cost plays a key role in the pricing of products.

If you also look at housing as well, houses are expensive in Accra due to migration. And as you know cost of housing in Accra is relatively more expensive when compared to same in other African countries and even some parts of the United States.”