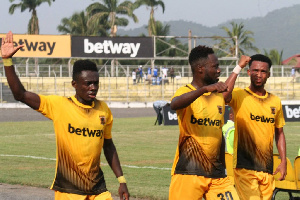 The Matchday 2 of the Ghana Premier League came to life with a bursting vibe of local football from across all League centres.

Legon Cities and Asante Kotoko kicked off the week 2 games in a Friday night football when the Porcupines thrashed the Royals 3-1 at the Accra Sports Stadium. A brace from Emmanuel Gyamfi and Augustine Okrah cancelled out Panayotis Papadopoulos early strike.

On Saturday, Inter Allies recorded their first win in the league after seeing off Bechem United at the Accra Sports Stadium. Victorien Adebayor and Kwabena Kyeremanteng scored for the Eleven Is To One side with Moro Salifu getting the consolation for the Bechem-based side.

At the Akoon Park in Tarkwa, Prince Opoku Agyemang bagged a brace as Medeama SC thumped Hearts of Oak.

The top liner of the week proved to be an easy match for the Mauve and Yellow side as Prince Opoku scored twice within the first half mark in his sides 3-0 win.

Over in Sogakope, WAFA eased past visiting Ebusua Dwarfs with a 2-0 win. Eric Asamany and Daniel Owusu ensured that the Sogakope-based outfit continues their dominance over the Abontoa boys.

Berekum Chelsea at the Golden City Park played an entertaining goalless game against Liberty Professionals FC who becomes the only club in the 18-team league to draw their opening two league matches. Kofi Owusu missed a late penalty kick for Berekum Chelsea.

Ashantigold defender Yussif Mubarack scored the only goal in the regional derby to give the Miners a slight win over the Insha Allah Boys at the Baba Yara Stadium in Kumasi. King Faisal FC failed to use their numerous chances created in the opening half and were punished from an unlikely source in the goal-shy game

Enos Adipah Kwame continues his search for premier league win as the head coach of Karela United FC with a well-deserved point away to Elmina Sharks FC. The former Wa All Stars FC gaffer inspired his team to a point thanks to a goal from Gyanfosu Darlington. Ralf Ocloo pulled parity for the host in the thrilling clash.

Richard Nathan’s last gasp goal for Aduana Stars FC stole the points from Great Olympics in the capital exercise. The Dade boys toyed with their chances and were punished by their visitors on the death.

In the last game of the week, Techiman Eleven FC suffered back to back defeats against Dreams FC despite their aesthetic value on the pitch. The Sure Boys played their hearts out only for Mohammed Suleiman to deflate their egos with the only goal of the game.