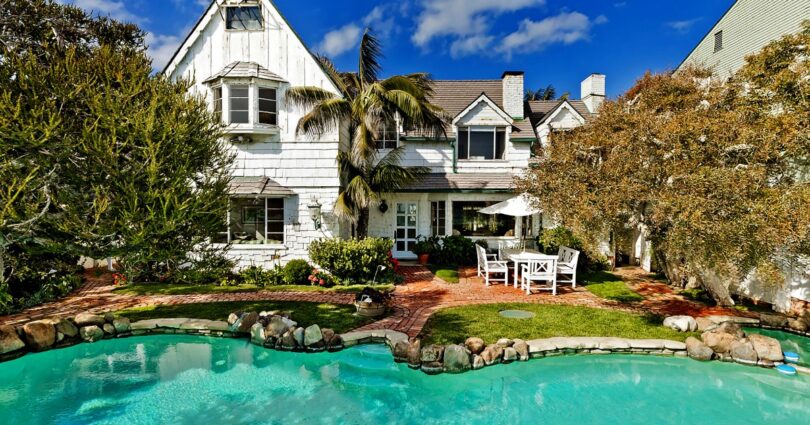 The onetime home of a Hollywood producer, a billionaire’s son’s estate and a striking new build in Brentwood were among Los Angeles County’s most expensive real estate transactions that closed in July. Here’s a closer look.

Behind the gates of Beverly Park, an under-construction mansion set on four acres where Oscar-winning producer Richard Zanuck once lived changed hands for $11.2 million shy of the original asking price.

The half-built spec mansion, designed by architect Steve Hermann, is accompanied by a guesthouse, a guard house and a subterranean garage. Amenities on site include a movie theater, a swimming pool and a tennis court. Once completed, the 27,000-square-foot home will have 14 bedrooms and 17 bathrooms.

Zanuck, the son of Hollywood mogul Darryl Zanuck, bought the property in the 1980s. Following his death in 2012, the estate was sold for $20.1 million.

Set behind wrought iron gates, the estate centers on a French country-style mansion designed by architect Peter Choate. Built in 1985, the 10,600-square-foot residence holds five bedrooms and nine bathrooms on a single story. A vaulted-ceiling great room, a tiled kitchen and a paneled study are among features. Picture windows take in park-like views.

The 2.5-acre property borders the Los Angeles Country Club and has a swimming pool and tennis court.

Designed by architect John Andrews, the 12,386-square-foot contemporary is visually dramatic with its stone accents, wood panels and steel-framed windows. Set on about an acre, the house has six bedrooms, 12 bathrooms, a glass-enclosed wine cellar, a library and a home theater.

The property hit the market in June and sold in about six weeks, records show.

Blair Chang of the Agency was the listing agent. Santiago Arana, also with the Agency, represented the buyer.

Found within the Malibu Colony, a guard-gated community long popular with celebrities, the Cape Cod-style compound includes a three-bedroom main house, a two-story guesthouse and a lagoon-style pool. Set on 60 feet of beachfront, the property has decking that overlooks the surf and a staircase leading to the beach below.

The Bells, who are both deceased, co-created “The Young and the Restless” and “The Bold and the Beautiful.” The two daytime soap operas are among the most successful and enduring in television history.

Rick Hilton, Jeff Hyland and Chad Rogers of Hilton & Hyland were the listing agents. David Findley of the Agency represented the buyer.

The East Coast-inspired traditional home, completed in 2019, sits on about three-quarters of an acre in a guard-gated neighborhood. The three-story house includes seven bedrooms, 12 bathrooms, an elevator and an office with floor-to-ceiling built-ins. A custom ceiling tops the dining room, which opens to an outdoor patio.

Outside, formal landscaping surrounds a swimming pool, a spa, a pool house and an outdoor dining area.

David Parnes and Mauricio Umansky of the Agency were the listing agents. Parnes also represented the buyer.