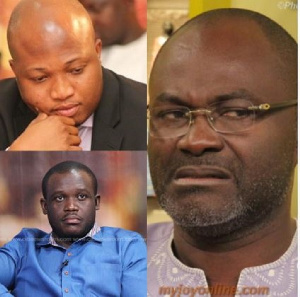 Some politicians have sympathized with the National Security Minister, Albert Kan Dapaah

Ghana has in a long time, not had its share of politicians and their girlfriends’ “madness” being displayed in full glare of the public until National Security Minister, Albert Kan Dapaah broke the record.

He has become the “scapegoat” for Ghanaians after an unidentified lady he was alleged to have been romantically linked with, leaked a video of him in his pajamas, while “video-chatting”.

Prior to this, there have been a series of rumors of government officials “chasing” and sponsoring young girls all over the place except that none of such, had been witnessed publicly until now.

Scores of people have since shared their varied opinions on the issue with the majority of them heavily criticizing and mocking the National Security boss for his “immorality and carelessness”.

Kwame A Plus, some members of the opposition NDC including Mubarak Muntaka, Owusu Banahene, Hannah Bisiw, and Security Analyst Adib Saani are among the lot, lambasting and calling for his resignation, following the incident.

Nonetheless, some politicians including Ken Agaypong, Adomako Baafi, NDC MP Sam George and Samuel Okudzeto Ablakwa have chosen to throw their weight and sympathy behind the National Security Minister.

Let’s look at some politicians and how they commiserated with Kan Dapaah:

The NDC Ningo-Prampram MP has been of the view that Albert Kan-Dapaah was set up by persons from within his own party.

He took to Facebook immediately after the incident and wrote:

“Statecraft on display. Set a man up, play coy, orchestrate calls for his resignation and pressure him to resign. Just so you bring the ‘greater evil’ of the two to control our national security. We live in dangerous times as a Nation,”

“Wicked, very wicked people run affairs of State. No one is safe from the cabal. Not even one of their own. Pray and stay woke. Always!” he added.

The North Tongu NDC MP believes that instead of rejoicing, there is the need for colleagues to learn great lessons from the fall of Albert Kan Dapaah.

In a tweet, he wrote:” Do not rejoice when your enemy (or political opponent) falls; And do not let your heart be glad when he stumbles. – Proverbs 24:17 I will rather we learn useful lessons to guide our future. Wish you all a great week, my friends”.

The Assin Central MP also says no man on earth has the moral right to condemn the National Security Minister as anybody, including the Pope can be caught in the web of such an attractive young woman.

He, however, issued a stern warning to ladies (slay queens) to be very careful about their dealings with government officials else risk being exposed soon.

“Leave them; they will see who will pay their rent for them. The way women are harassing men in this country, it is not easy. If it is a man who did that, he would be facing the court. It is all blackmail.” He said on a radio

The Former NPP National Communications Director, Yaw Adomako Baafi appears to be strongly against calls by some people calling for Albert Kan-Dapaah, to resign after the scandal.

He defended the National Security boss on NEAT FM’s morning show ‘Ghana Montie’, saying he never did anything wrong to tarnish his office, hence, calls for him to resign are intolerable.

“Where in the video did Kan-Dapaah sell our Ghana’s security?” Adomako questioned.

The PNC national chairman in a Facebook post condemned all critics and questioned whether they have never been involved in such intimacy before.

“This morning, I woke to a very dangerous and disgusting video involving our National Security Minister. I think it is very bad to tarnish a man’s image to this level. Which of us has/have not been involved in intimacy such that we give confidence to the other person?. I condemn this with the energy at my command and please desist from sharing the video with me.” he wrote.