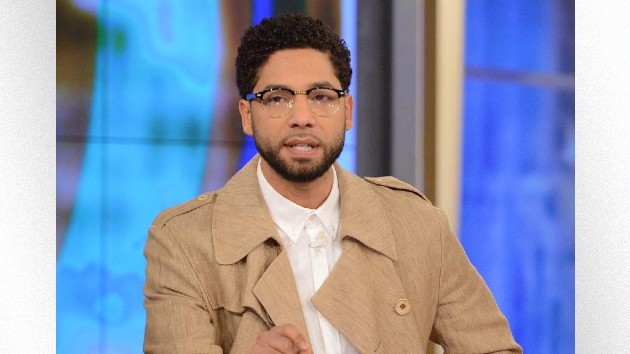 (LOS ANGELES) — As it does every year, the world of entertainment saw its share of scandals in 2019. From Jussie Smollett’s alleged racial bias attack to the Varsity Blues college admission scandal that ensnared Lori Loughlin and landed Felicity Huffman behind bars, to the the sex charges slapped against Cuba Gooding Jr. and R. Kelly, let’s take a look back at the days some celebrities would rather forget.

Jussie Smollett’s alleged attackOn January 29, the entertainment world was rocked when news emerged that Empire star Jussie Smollett had been attacked in the middle of the night in Chicago, allegedly by supporters of President Donald Trump. The actor said his attackers called Smollett gay slurs and poured bleach on him. Celebrities rallied around the star, and even the president himself denounced the attack. Police eventually questioned two brothers in connection to the alleged attack, who told authorities Smollett paid them to help stage the incident.Smollett was indicted by a grand jury on 16 counts, including felony disorderly conduct, in relation to filing a false report. Those charges were ultimately dropped in favor of an “alternative resolution” that involved Smollett performing community service and forfeiting the remainder of his $100,000 bond to Cook County. An investigation as to why that occurred — and into a letter filled with white powder that was sent to Smollett, which police say Smollett also staged himself — is ongoing.In June, Empire creator Lee Daniels confirmed Smollett would not return as Jamal Lyon for the show’s sixth and final season.In November, Smollett filed a counter lawsuit against the city of Chicago in response to a lawsuit the city filed against him in April, requesting $130,000 in civil penalties, damages and attorney’s fees and costs arising from Smollett’s “false statements.” Smollett’s attorneys denied that Smollett orchestrated and planned athe attack on him and admonished the police department for continuing to imply that Smollett was guilty after the charges were dropped, according to the court documents.

Leaving NeverlandIn January, the controversial documentary Leaving Neverland premiered at the 2019 Sundance Film Festival. The film became a two part event, broadcast on March 3 and 4 on HBO. The doc was devastating to Michael Jackson’s reputation — two men claimed that Jackson sexually abused them when they were children. Detractors, Jackson’s family included, called it a character assassination. The movie went on to earn an Emmy nomination.

Michael Jackson’s estate subsequently sued Leaving Neverland’s producers and HBO for $100 million, claiming that by airing the documentary, the latter violated a 1992 contract that prohibited them from disparaging Jackson, in exchange for granting HBO rights to air Jackson live performances. The suit is still in litigation.

The fallout surrounding the singer was swift. Kelly was dropped from his label, Sony’s RCA Records, which turned out to be the least of his subsequent problems.

In February, Kelly turned himself in to Chicago police after being charged with 10 counts of felony criminal sexual abuse involving four alleged victims. He later made bail, but was jailed again in March for unpaid back child support. During that time, Kelly spoke to CBS’ Gayle King about the charges. The interview was a train wreck, featuring Kelly storming up from his chair and swearing while King calmly admonished him.

Then in May, Kelly was charged with with 11 new counts of sex assault and sex abuse for actions allegedly taking place in January 2010. In July, he was arrested in Chicago on a 13-count indictment that included charges of child pornography and obstruction of justice.

Kelly, who’s still currently behind bars in Chicago, faces a combined 18 counts in federal indictments in Chicago and New York City, including charges of child pornography, enticing a minor into illegal sexual activity and conspiracy to obstruct justice by attempting to pay off and intimidate witnesses.

A trial in the federal case in Chicago is scheduled to begin April 27, 2020. Meanwhile, Kelly’s New York case has been set for May 18, 2020. The singer is also facing abuse-related charges in Cook County, Illinois and Hennepin County, Minnesota.

Kevin Hart and the OscarsComedian and actor Kevin Hart snagged what he’d always considered a dream job: hosting the 2019 Academy Awards. However, Hart stepped down in January after homophobic tweets that he made between 2009-11 surfaced.

Hart apologized, noting how much he’d grown since then, but it did little to quell the criticism. Even friend, gay rights advocate and fellow comic Ellen DeGeneres tried to help defuse the situation, inviting Hart to appear on her daytime talk show and explain his side of the story, an invitation Hart accepted.

Ultimately, Hart declared he was through apologizing and declined the job. The Oscars broadcast aired as scheduled but without a host, ironically earning solid ratings and critical praise. The Emmys subsequently also went host-less, with the Motion Picture Academy most recently declaring they were considering another no-ost Oscars broadcast in 2020.

Prosecutors say those indicted in the investigation, dubbed Operation Varsity Blues, allegedly paid bribes of up to $6.5 million to get their children into elite colleges, including Yale, Stanford, Georgetown and the University of Southern California. Loughlin, 54, best known for her role as Aunt Becky on the ABC sitcom Full House, and Massimo were charged with conspiracy to commit mail fraud and honest services mail fraud along with 35 other parents, including Huffman. Huffman pleaded guilty and served 12 days behind bars. Loughlin and Giannuli pleaded not guilty; their fates are still to be determined.

Marvel re-hires director James GunnIn March, nearly a year after he was famously fired from Guardians of the Galaxy Vol. 3 over decades-old tweets joking about AIDS and pedophilia, a repentant — and grateful — writer-director James Gunn was re-hired by Marvel Studios’ parent company, Disney, also the parent company of ABC News. In the interim, he’d written The Suicide Squad for Warner Bros. That movie is slated for a 2021 release. Guardians of the Galaxy Vol. 3, on which production was indefinitely halted after Gunn’s initial dismissal, has no release date set.

NXIVM cult scandalIn 2019, five people associated with NXIVM — a New York-based “self-help group” that was exposed as an alleged cult — pleaded guilty to various charges. Among those charged was former Smallville star Allison Mack, who was accused of sex trafficking. She pleaded guilty to two charges of racketeering for her involvement. Female accusers say they were branded with the initials of NXIVM founder Keith Raniere, and say the group was nothing more than a cult that recruited sex slaves. On June 19, 2019, a federal district court in Brooklyn, New York convicted Raniere on charges of sex trafficking and racketeering.

Cuba Gooding Jr.’s sex accusations2019 was certainly a rough year for Oscar winner Cuba Gooding Jr., who was accused by more than a dozen women of unwanted touching. The actor surrendered to New York City police in June and was charged in one of the cases; he was accused of drunkenly groping a woman at a New York City bar. He was booked on additional charges in October. As accusations mounted, the actor maintained his innocence.