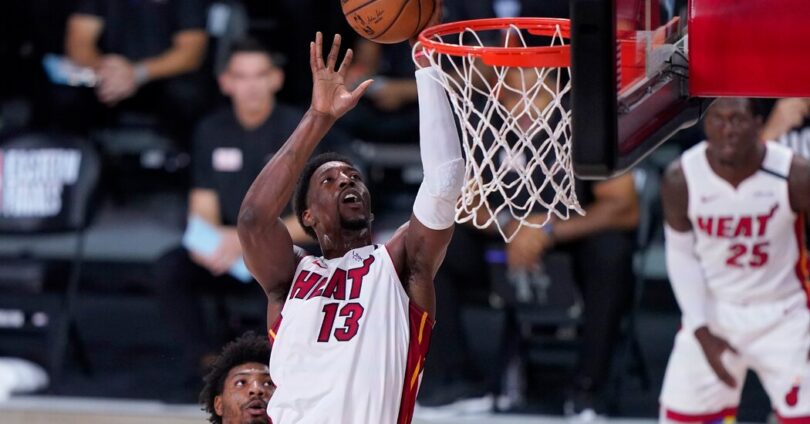 As Bam Adebayo’s college coach, John Calipari is admittedly biased but also unapologetic when he gushes about his former player and how much the burgeoning Miami Heat star has improved since his lone season at the University of Kentucky.

“He reached out to us,” Calipari said. “He was like, ‘Why isn’t Kentucky recruiting me?’

Adebayo has proved it all year, ascending to All-Star status in his third N.B.A. season and playing with distinction in the league’s bubble at Walt Disney World near Orlando, Fla. As recently as August 2019, Adebayo was cut from the United States national team that went on to finish a humbling seventh at the FIBA World Cup in China. This summer, alongside Jimmy Butler, Adebayo has led the Heat to within one game of the N.B.A. finals. That level of play has cemented him as one of the league’s most versatile two-way big men with his ability to operate as a playmaker while flashing the requisite mobility and strength to guard players at every position.

“He created a position,” Calipari bellowed into the telephone this week, insisting that the mounting praise for Adebayo had not been loud enough.

“He’s a point-center. Tell me the last one,” Calipari said. “And I mean truly a point-center. Not a big guy who can pass. He can bounce it and get by you. He can make bang-bang plays like a point guard. He can do Eurosteps. And he’s still going to rebound and block shots.”

A particular blocked shot stands out: Adebayo’s one-handed rejection at the rim of Boston’s Jayson Tatum in Game 1 of the Eastern Conference finals. It’s bound to be remembered as the series tone-setter if the Heat can take the last step and convert their 3-1 lead over the Celtics into a finals berth. Despite nagging soreness in the same left wrist that helped turn Tatum away, Adebayo contributed 20 points, 12 rebounds and 4 assists in the Heat’s 112-109 victory in Game 4 on Wednesday, shoving Boston to the brink of elimination.

Whatever happens next, entering Game 5 on Friday night, this has been a breakout postseason run for Adebayo and a redemptive one for him after disappointment with the U.S. national team. The same goes for the four Celtics who did make the U.S. roster for the World Cup. Surely none of them have forgotten how far from glory they all landed a year ago.

After Kemba Walker joined the Boston Celtics in July 2019, he reported to the national team and began building on-court chemistry with Tatum, Jaylen Brown and Marcus Smart in red, white and blue before he ever played a game in Celtics green. It proved to be a long, uncomfortable summer for U.S.A. Basketball, as the team fell far short of expectations under Coach Gregg Popovich after numerous marquee players declined to participate. Yet it appears that all of the extra time Walker spent with his new teammates did have some down-the-road benefits, judging by Boston’s first-round sweep of Philadelphia and its second-round dethroning of the reigning champions from Toronto in seven games.

Danny Ainge, Boston’s president of basketball operations, said he was “excited” to see the Celtics account for one-third of the 12-man U.S. roster, though he was unsure “to what extent” they gained an advantage.

“Actually being in competition, you learn a lot about each other,” Ainge said. “The team didn’t play great, but I know the guys had a good experience.”

Much clearer with the benefit of hindsight: U.S.A.B. officials erred in cutting Adebayo. No one had any inkling then what he would become — not even Calipari could claim to have predicted that Adebayo would be selected as an All-Star by February. It is nonetheless an enduring what-if that devotees of the international game still like to ponder: Where would the Americans have placed had the team included Adebayo?

The U.S., without Adebayo and after Tatum hurt his ankle late in the competition, recorded its worst-ever finish in a major tournament with N.B.A. players. Adebayo had underperformed in the team’s practices, but that did not fully explain why he was cut. U.S.A.B. staff members fervently believed that they needed personnel sufficiently bulky to counter two star centers: Denver’s Nikola Jokic (Serbia) and Toronto’s Marc Gasol (Spain). Adebayo, at 6-foot-9 and 255 pounds, was deemed too small, and choosing size over skill backfired; Milwaukee’s Brook Lopez, Indiana’s Myles Turner and Denver’s Mason Plumlee were all selected ahead of Adebayo for the U.S. team — and struggled.

In December, Adebayo told The New York Times that the U.S.A.B. snub left him with a “bigger chip on my shoulder” but, he also added, “it’s not the reason I’ve been doing what I’m doing.” Calipari pointed to something else.

“You have to start with his drive and his fight and his spirit,” Calipari said. “And you have to go way back to say, ‘What motivates him?’ When he was here at Kentucky, on his phone, his screenshot was the trailer that he and his mom lived in.”

Marilyn Blount raised Adebayo as a single mother in that trailer in Pinetown, N.C., walking two miles to work as a cashier at a butcher shop. When Calipari made the pitch to Blount to allow her son to attend Kentucky, he met her in a back room at the meat market with several family members and friends.

At Kentucky, Calipari tried to keep his aspiring point-center focused on defense and screen-setting. He said it was “hard” to persuade himself to experiment with Adebayo as the initiator of the Wildcats’ offense when he had multiple ballhandlers, including Sacramento Kings guard De’Aaron Fox, on that Kentucky team. The Heat likewise waited until Year 3 to unleash Adebayo after selecting him with the No. 14 pick in the 2017 draft; Calipari cited the offensive confidence and freedom instilled in Adebayo by Miami Coach Erik Spoelstra and Butler as this season’s difference-makers.

It was there to be seen last fall for the U.S. team, too, but Adebayo didn’t get the chance.

“I’m not getting into that,” Calipari said. “But my guess is he’ll make the team next time.”