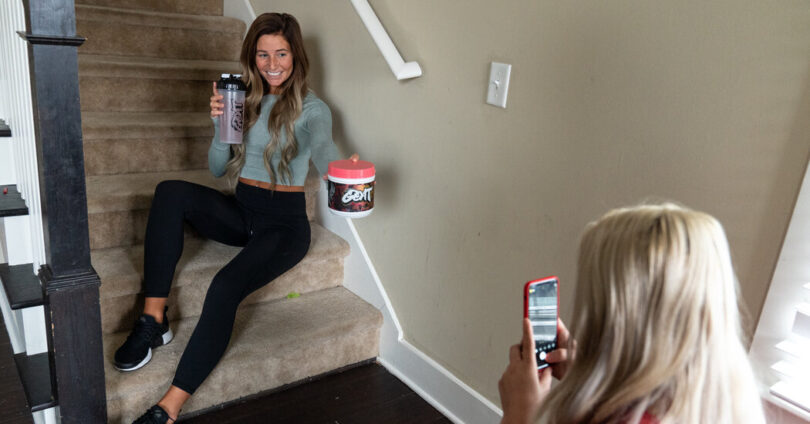 During the three years Jamie Andries spent as a member of the University of Oklahoma cheerleading team, she cheered at two Big 12 championship football games, the Orange Bowl, the Sugar Bowl, the Rose Bowl and the 2016 Final Four.

And while the star football and basketball players in those games — including the Heisman Trophy-winning quarterback Baker Mayfield and the future N.B.A. guard Buddy Hield — were forbidden to make money from their athletic fame beyond what the university provided to cover their attendance, Andries was receiving thousands of dollars through sponsorship deals with Crocs, L’Oréal, American Eagle and Lokai.

“Coming to OU for college was a big milestone for me but it has given me so many amazing opportunities like being able to cheer for the Sooners,” Andries said in an Instagram post in February 2016 that shows her wearing her cheer uniform and holding up her left wrist to display two Lokai bracelets. “This month I support @livelokai and the Alzheimer’s Association.”

The lucrative opportunities for Andries came because of her fame and a social media following in the cheerleading world — she is one of the top “cheerlebrities,” as such stars are known — and because the N.C.A.A. and its universities do not regulate cheerleading in the same ways they do other sports.

Long-held rules governing amateurism among college athletes do not apply to cheerleaders, meaning they can sell autographs, appear in commercials and wear their cheer uniforms while promoting products as social influencers, without fear of being disciplined. In sports governed by the N.C.A.A., athletes risk their eligibility to compete if they engage in similar activities, and their teams and universities can also be punished.

In 2011, for example, a scandal erupted at Ohio State when several football players sold awards, bowl-game memorabilia and other Buckeyes swag to the owner of a tattoo parlor, resulting in the resignation of the team’s coach, a skipped postseason and the loss of nine scholarships for the program.

The rules have also challenged some superstars to choose between college sports and the commercial markets. Simone Biles, the Olympic gymnastics champion, gave up a scholarship offer from U.C.L.A. when the financial reality of turning pro made participating in college sports seem like too much of a sacrifice.

The N.C.A.A. has long fought attempts to loosen its rules, but is now on a path toward allowing athletes to earn money from some endorsements, including through social media deals. The shift followed pressure from legislation in California and several other states, enacted by lawmakers who said the N.C.A.A.’s stance was no longer tenable given the significant growth of college sports as a moneymaking enterprise.

New rules are expected to be adopted by January and to take effect at the start of the 2021-22 academic year, creating a new market.

Andries said in an interview that she understands why the current restrictions for college athletes exist, but thinks that the rules can be changed in a way that is still palatable to universities — even if the athletes ultimately don’t get as much latitude as cheerleaders.

“I do think it’s a good way for players to benefit themselves and help other brands grow,” Andries said.

Since its inception in the late 19th century, cheerleading has evolved from yelling encouragement on the sidelines to a competitive hybrid of gymnastics, dance and acrobatics. Advanced tumbling skills and the ability — plus courage — to perform gravity-defying stunts are the norm at the collegiate level, where top cheerleaders can reach a level of fame akin to that of star quarterbacks, especially on Instagram.

In the early 2010s, Andries became one of the first cheerleaders to achieve social media stardom, building her following while competing with a club team in high school. Her first deals were with small companies that peddled cheerleading gear, including one that sold hair bows that she designed and autographed. She now has 429,000 followers on Instagram, and her account has been verified for the past five years.

As Andries’s follower count grew, so did the deals. She has been in partnerships with Nissan, Amazon, FabFitFun, Colgate, SmileDirectClub and Urban Decay.

Andries said that her coaches in college had no problem with her promoting products while wearing her cheer uniform; their main rule was that she wasn’t allowed to miss practice for outside appearances.

“Their only concern was anything that would affect the team,” she said.

Mackenzie Sherburn and Shannon Woolsey, who are now at Texas Tech, were featured in the Netflix documentary series “Cheer” while they were teammates at Navarro College, a Texas junior college. They were able to turn that buzz into financial gain, unlike the college football players who gained fame while appearing in another Netflix documentary series, “Last Chance U.”

Woolsey, who has a verified Instagram account with 255,000 followers, has posted sponsored content for the apparel company Reebok, the study-aid website Course Hero and the cosmetics company Vanity Planet. She can earn more than $5,000 per post through deals with larger companies, and sometimes receives $200 to promote smaller boutiques.

“A lot of companies like stories of me sitting and talking about the product and making it seem like it’s not an ad,” Woolsey said.

Sherburn said that along with free apparel, the entire Texas Tech cheer team gets discounts from local salons for services like tanning and manicures. “We have to post about it and say, ‘Thank you for taking care of me,’ in return,” she said.

Woolsey and Sherburn said they did not consult their Texas Tech coaches about posting sponsored content because they saw no need to ask for permission.

“I don’t think they really care, because it’s such a big thing in the cheerleading world now,” Woolsey said.

Cheerleading does not qualify as a sport, at least not in the eyes of the N.C.A.A. and federal regulators, in part because some universities have tried to circumvent gender-equality rules by granting varsity status to cheer teams at the expense of conventionally competitive opportunities for women. Yet some cheer teams get perks from universities that are similar to those provided for other athletic programs.

Some universities offer meal plans, small scholarships, access to athlete housing, tutoring services, early class registration and waivers of out-of-state fees. Taryn Burke, a former cheerleader and current assistant coach at the University of Central Florida, said that the team there gets “access to the same exact things as any other sport would have” and awards scholarships based on a cheerleader’s skill level, grades and seniority.

Cheerleaders may also receive free or discounted products as a result of companies’ sponsoring their teams. Jessica Pak, a former U.C.L.A. cheerleader, recalls receiving Vera Bradley bags and NARS makeup through sponsorships that were specifically tied to the spirit squad. The sponsors expected the gifted products to be used by the cheerleaders during games and to be promoted on the spirit team’s social media account.

“I don’t really understand why that rule is a thing,” Pak said of the N.C.A.A.’s restrictions.

Peg Fitzpatrick, a social media marketing expert and the co-author of “The Art of Social Media: Power Tips for Power Users,” said brands have focused on college cheerleaders for two particular reasons: The cheerleaders can directly reach a target demographic (people in their late teens and early- to mid-20s), and they present an opportunity for companies to tap into the excitement of college sports without N.C.A.A. interference.

“The image of a cheerleader is kind of like Chevrolet and hot dogs and apple pie,” Fitzpatrick said.

High school cheerleaders are also cashing in, with no risk of voiding their eligibility to cheer in college. Ryan Cummings, a 16-year-old from North Carolina, gained fame and 437,000 Instagram followers after a GIF of her making a sassy expression during a cheer routine in 2018 became an internet meme. She gets money for posts on TikTok and, like other cheerleaders, sells autographed bows and has hired an agent to help her negotiate deals.

Her teammate, Kenley Pope, 15, has had Instagram partnerships with Casetify, Novashine, Ivory Ella and Crocs, which paid her $2,000 for posts. Pope’s mother and coach, Courtney Smith-Pope, helps her determine which products to promote.

Smith-Pope owns Cheer Extreme Athletics, a gym in Kernersville, N.C., that has produced multiple cheerlebrities over the years. She said she doesn’t need to dictate the endorsements her athletes accept. “These kids own their own talents and their own abilities,” she said, a sentiment shared by many coaches.

Woolsey and Andries independently hired agents while in college to help manage their endorsement deals, and Andries, now a social media manager for the apparel company Rebel Athletic, still makes extra income from deals related to her popularity from her cheer days.

She said she had realized in college that she got “the best of both worlds” at Oklahoma.

“I was like, ‘Wow I get to cheer and I get to have this sort of side job that I get to focus on,’” she said, “‘and I get to make some money that I can save up for myself to use after college.’”