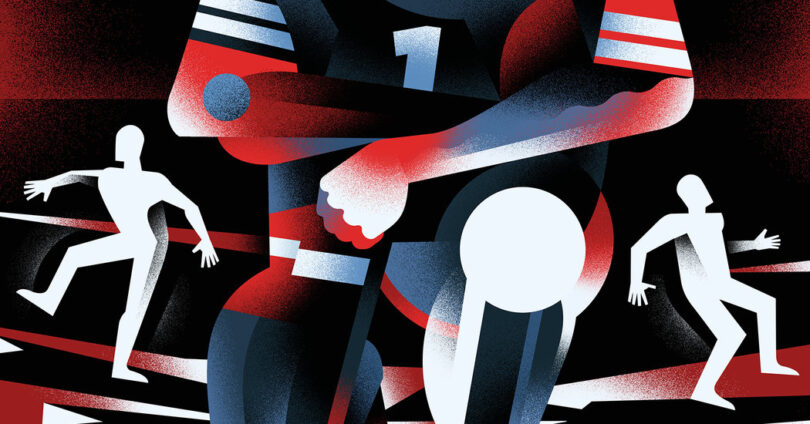 A strange thing happened while most professional sports were away, shuttered by the coronavirus.

The stand-or-kneel debate, sparked by Colin Kaepernick’s posture during the national anthem in 2016 and smoldering since, has reignited — bigger than before, and this time with an unexpected twist.

Today, athletes may have to explain why they chose to stand, not kneel, during “The Star-Spangled Banner.”

“I would have found it hard to believe a year ago,” said Charles Ross, a history professor and director of African-American Studies at the University of Mississippi. “I would have said something has really happened in America to cause that. Clearly what’s happened in America and in Minneapolis on May 25 fundamentally changed people’s perspectives as it relates to racism in this country.”

The protest movement that grew after George Floyd’s death while in police custody has a deep connection to Kaepernick. People are protesting racial inequality and police brutality, just as Kaepernick had done. And many, including some police chiefs and officers, are kneeling in gestures of unity and respect.

Now the issues, and the gesture, have volleyed back to the sports world. The past couple of years, most athletes avoided getting caught up in it. They could blend into the background, behind league protocols for standing or amid the quiet comfort of others.

Even most of those considered leaders and allies to Kaepernick, in places like the N.F.L. and the N.B.A., found reasons not to kneel.

The difference in 2020, as sports begin to emerge from their pandemic suspensions, is that nearly every professional athlete will be forced to choose a posture.

“You cannot sit around now in this post-George Floyd period we’re in and say, ‘We’re going to continue to take this safe position,’” Ross said. “No. Either you have an issue with racism or you do not.”

Rachel Hill, a soccer player, found out first. When the National Women’s Soccer League started its season last Saturday night, Hill’s Chicago Red Stars and their opponents lined up for the pregame national anthem. Most players took a knee.

Hill, a 25-year-old attacker, remained standing. She bowed her head and put her hand on the shoulder of a Black teammate, Casey Short. Just a year or four ago, Hill might have been hailed for her understated support in fighting racial inequality.

Not in 2020. Days later, after a barrage of online criticism and debate, Hill felt compelled to defend her body position in a lengthy statement, foreshadowing what awaits most athletes as the games resume.

“In one way, it attests to the genius of Kaepernick’s protest tactic, which is kneeling silently during the anthem,” said Eric Burin, a history professor at the University of North Dakota and the editor of a collection of essays called, “Protesting on Bended Knee: Race, Dissent and Patriotism in 21st Century America.”

“When you read Hill’s statement, it was gut wrenching — tears were shed, forthright conversations were held — and as much as protest tactics are designed to cause discomfort, Kaepernick’s tactic still works.”

The debate has become so polarizing, though, that even inaction can become political. An entire professional softball team quit last month when its general manager bragged to President Trump on Twitter that her players had stood for the anthem. And when New Orleans Saints quarterback Drew Brees told an interviewer in June that he believed kneeling protests were “disrespecting the flag” — a stance that has been unchanged for him since 2016 — he was quickly forced to backtrack amid a hailstorm of criticism from fans and teammates.

The discussion is sure to spread as more leagues plan to restart, and as more players kneel, and it is destined to resume its outsized place in political discourse as the fall elections approach. It may even end, at least in some leagues, the long American tradition of playing the national anthem before sporting events.

When Major League Soccer resumes its season on Wednesday inside a so-called bubble in Florida, it will not play a pregame anthem, ostensibly because there will be no fans. But league officials also have discussed ending the practice permanently when teams return to their home cities.

“Which in itself would cause consternation on many sides,” Burin said.

The dramatic shift toward focusing on those choosing to stand, rather than kneel, could hardly be imagined when Kaepernick took a silent stand by not rising for the anthem — sitting at first, then kneeling, after consultation with a retired Army Green Beret, Nate Boyer.

Only a few other top athletes followed, but it was all enough to divide and inflame Americans, including a gas-throwing president and an administration that saw political advantage in rejecting the anthem protests.

Leagues and organizations tiptoed through the furor, mostly without grace, until the issue faded. They will not be able to avoid it now.

A majority of Americans, 52 percent, now approve of N.F.L. players kneeling for the anthem to protest police killings of African Americans, according to a Yahoo News/YouGov poll in June. Only 37 percent objected. It is a significant shift from the group’s poll in 2016, when only 28 percent found Kaepernick’s gesture “appropriate.” That support nudged to 35 percent in 2018.

Some leagues tweaked their anthem policies in recent years, and then tweaked them again more recently as public opinion shifted. The United States Soccer Federation, for example, created a policy requiring all players to stand for the anthem in 2017 — after the women’s star Megan Rapinoe became one of the first star athletes to follow Kaepernick’s lead — only to rescind it last month.

Others appear to be bracing for the issue to return, but without a firm stance.

In the N.B.A., which is planning to quarantine itself at Disney World in Florida this month to complete its season, Commissioner Adam Silver has been noncommittal about how the league will handle the likelihood of players kneeling for the anthem. The league has had a stand-only policy for decades, he pointed out to Time magazine recently.

“I also understand the role of protest, and I think that we’ll deal with that situation when it presents itself,” Silver said.

Major League Baseball, which hopes to begin a shortened season later this month, had only one player kneel in 2017. It took no clear stance then. Its abstinence may be tested this month.

The N.F.L., which found itself at the center of the controversy, banned kneeling in 2018, opting instead for a stand-or-hide (in the locker room) choice. But Commissioner Roger Goodell recently showed support for the Black Lives Matter movement and, in his own pivot, for player protests.

“We, the National Football League, admit we were wrong for not listening to N.F.L. players earlier and encourage all to speak out and peacefully protest,” he said.

It all promises to make the anthem must-watch television again this fall.

And with bleachers and bar stools still mostly off limits, the patter will ricochet mostly through social media. That is what happened with the N.W.S.L., where the anthem threatened to overshadow the league’s season openers last weekend.

“It’s so interesting, the importance that kneeling has assumed,” Burin said. “Why this particular gesture? Why is that so important, as opposed to putting your hand on someone’s shoulder or bowing your head?”

On Tuesday, Short and her Chicago Red Stars teammate Julie Ertz, who had consoled a sobbing Short during the anthem last Saturday, each tweeted a long statement, a sort of essay titled “Our narrative.”

“Currently, every time the national anthem is played, our country continues to become more and more divided on what the visual symbol of unity looks like,” they wrote. “Through our continuous conversations we wanted to make sure that whatever we decided to do, it would not be an empty gesture.”

Among those conversations, they said, were emotional ones with Hill, who had stood next to them, literally.

In her statement, Hill admitted to being torn about how to approach the anthem.

“I chose to stand because of what the flag inherently means for my military family members and to me, but I 100% support my peers,” she wrote.

She added: “I support the black lives matter movement wholeheartedly. I also support and will do my part in fighting against the current inequality. As a white athlete, it is way past due for me to be diligently anti-racist.”

Hill tried to have it both ways. But if there is anything certain about the anthem debate, renewed and turned inside-out in these nuance-free times, it is this: There is little room for such posturing.