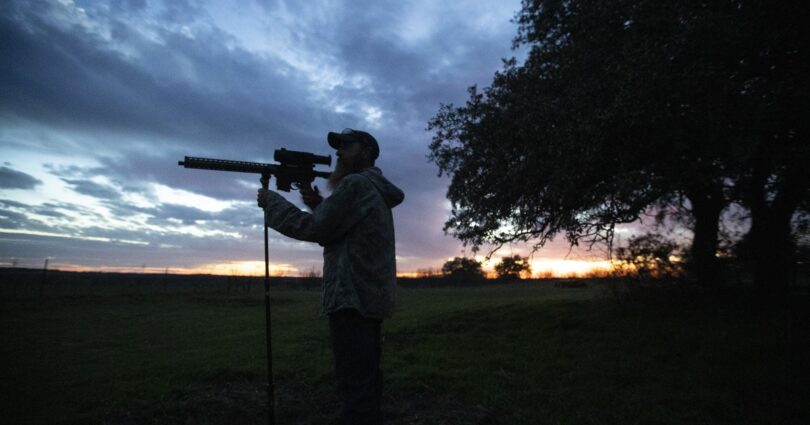 This holiday season many Texans will feast on turkey and roast beef and, being Texans, barbecue. Some will dine on pork, but not just any kind of pork. Call it “wild boar.”

How this meat reaches the table is a story that is quintessentially Texan, involving rugged individuals, a love of the outdoors and, yes, guns. To tell that story, let’s go back to earlier this year, before the coronavirus, to a wheat field in north-central Texas at dusk.

Peering through an infrared night-vision scope atop his customized AR 15-style rifle, Fred Jones spied his prey trotting into the field by the dozens.

“We may not get the big one,” Jones said, “but we’re going to kill some pigs.”

It’s open season year-round on feral pigs, whose population in Texas has grown to nearly 3 million. Hunters are not required to retrieve carcasses, although there’s an incentive to do so: “wild boar” sells for up to 60 cents a pound.

The hogs are considered an invasive species, much larger than their south Texas cousin the peccary, or javelina. And they’re armed with four tusks that can be several inches long and razor sharp.

Feral pigs damage more than $52 million in Texas agriculture annually, according to federal and Texas A&M AgriLife Extension experts, and up to $2.5 billion nationwide. They harm watersheds and archaeological sites, rutting and burrowing into “pigloos” to cool off (pigs don’t sweat).

Omnivorous, they eat just about anything, including endangered species, and can transmit nearly three dozen diseases. And they breed fast. Sows can give birth at about a year old and deliver multiple litters annually of up to a dozen piglets.

“Every business you have outdoors here is affected by pigs. We are trying to stay on top of the problem,” said Jones, 43, an oilfield worker in rural Wise County about 40 miles northwest of Fort Worth. “It’s an epidemic.”

Before the hogs trotted into the field, Jones had sprayed himself with “Dead Downwind,” designed to make him invisible to pigs, who he explained see with their noses.

When Jones was growing up, wild hogs were rare. The first one he remembers seeing was killed by his uncle when he was 13.

Until the mid 1950s, wild pigs could be killed in California with no restrictions. While the state has added hunting license requirements and a wild pig tag fee, it may learn a lesson from Texas on how difficult it is to control their spread.

Wild hogs spread across the U.S. during the last 30 years from 17 to 39 states, their ranks growing to 9 million so fast, some experts call it a “feral swine bomb.” Since the 1960s, California’s wild pig population has mushroomed from about 100 to more than 300,000. In Texas, at least two-thirds of the population — more than 1.7 million pigs — must be killed each year to keep their numbers from growing.

Hog traps with cameras controlled by smartphone can cost more than $6,000. Texas state agricultural officials tried to fast-track a warfarin-based poison, but faced too many concerns about killing other animals. Scientists are trying to come up with a way to sterilize them with chemicals.

Year-round hunting has curbed the population and created another Texas tradition — competitive hog hunts. Jones was participating in the ninth annual monthlong Wise County hog hunt last winter. Hogs had to be killed in Texas or Oklahoma by midnight Feb. 29.

Teams of up to four people pay $200 to enter, and those with the heaviest hogs have a chance at four prizes paid from entry fees. Since about 600 people competed this year, that meant a first-place prize of $30,250, with $4,180 for the longest tusks, or cutters.

Contest organizer Trey Hawkins, whose family runs a local funeral home, learned long ago to impose strict rules on hog hunters, who he says are inclined to cheat. This year’s rules stipulated:

Hogs are defined to be feral, free ranging, wild hogs which have not been previously held, trapped, pen raised, and released for the purpose of being hunted.

No castrated hogs (which artificially increases their weight) aka barrow hogs, bar-d, barrowed, barred, etc. All boars must have both testicles!

No BS! We don’t want to hear drama about other teams and bickering back and forth. If you have legitimate proof a team is cheating or a possibility, please let us know, but no need to keep calling every day.

All winners must submit to a polygraph test.

“If there is any discrepancy in the polygraph,” the rules note, “there will be a vote between the two coordinators of the contest, a local game warden and an outside party.”

Hawkins said organizers added the polygraph during the contest’s second year. On the barn wall near the scale used to weigh entries, he keeps a metal detector wand to scan hogs “in case they’re full of lead.”

“We haven’t caught anyone yet,” he said.

One day a team of hunters calling themselves the Southern Night Stalkers arrived at the barn with the hog to beat: A pregnant sow weighing in at 367.4 pounds. The next day, another hunter brought in the hog with the longest cutters, nearly 5 inches. (Two years ago, the winner was 7 inches.)

Hawkins, 37, had to rush over to the barn from his family’s funeral home to handle another entry. Dressed in a suit and tie — he had a service later that day — he measured and weighed the beast: 240 pounds.

Hawkins knew competitors checking updates on the contest website would be suspicious.

“I’m going to post a picture if that’s all right, so people don’t freak out,” he said.

Hunter Adrian Ligon, 36, a welder from Loving, Texas, agreed. Hawkins snapped a photo of the hog suspended from his scale beneath the Texas state flag. It would be credited to Ligon’s team, Loving Hogs.

Soon after, another hunter arrived with a hog he claimed weighed more than 300 pounds. As soon as Hawkins saw it, he was skeptical. According to the barn scale, it weighed 269.4 pounds.

Ochs said a man who farms for his ranch had weighed the hog before he brought it over. Hawkins laughed, and said the man’s grain scale must be off.

“He’s cheating some people!” he said.

Hawkins slipped a metal X-shaped lug wrench over his scale hook and suspended himself for a moment. The scale read 240. Hawkins said he weighs 235, so he was actually crediting hunters a few added pounds.

The Wise County hog hunt draws hunters from across the country. Among this year’s entrants was Bob Hazel of San Luis Obispo.

“The population is just exploding there. I cannot believe the sheer number of pigs I have seen,” said Hazel, 56, a firefighter. “It’s like a guarantee, like surfing Hawaii.”

For Sam Longhenry, the contest is part of his hog-hunting way of life.

“Hogs kind of stole my heart,” Longhenry said as he set out on a hunt.

Longhenry, 22, of nearby Sanger, Texas, works for a local city and delivers pizzas part-time. He has a girlfriend who understands that most nights, he’ll be out in his pickup stalking hogs. Last year he killed 126. By the time this year’s contest started, he’d killed 40.

Hog hunting can be an expensive hobby. Longhenry has spent thousands on his AR 10-style rifle, infrared scopes, suppressors and cameras. He’s trained hunting hogs lured with feeders. He still lures hogs with a tropical-scented feed called Sawaiian Crush. He bought a wireless speaker to broadcast pig calls as he hunts that were recorded by a friend who keeps feral hogs, including “sow hysteria” (a frantic sow), “hey baby” (a boar in heat) and “little squealer” (a disgruntled piglet).

A showcase for compelling storytelling from the Los Angeles Times.

During this year’s contest, he killed a large boar only to discover it had been illegally castrated and released. Longhenry brought the pig to Hawkins anyway. With more than $30,000 on the line, he said, “It was worth a try.”

At 318 pounds, the hog might have tied for third place if Hawkins hadn’t disqualified it.

During the last week of the hunt, Longhenry walked for miles with a buddy by moonlight across fallow fields. Both wore snake-proof Kevlar boots, wary of rattlers and water moccasins. They scanned the darkness with infrared scopes so powerful they could see field mice playing in the grass. When they spotted a boar, they broke into a sprint, only slowing to scale a barbed wire fence. Ultimately, the hog eluded them.

“They’re smart. They know this is no longer a safe haven,” Longhenry said of the farm, whose owner had given him permission to hunt.

Some landowners bar hunters, concerned about safety. Others not only agree, they also offer to pay him. Longhenry refuses. He enjoys hunting and considers it a good deed, although he isn’t sure it makes a lasting difference.

“It keeps the population down, but it doesn’t really put a dent in it,” he said.

For Jones, his hunting ground of choice was the wheat field. He and his hunting partner, Chase Lasater, had spotted pigs the night before. Lasater, 43, a gravedigger, took a lure with him: Tink’s Power Pig, designed to smell like a sow in heat (aka urine).

It was windy, which tends to keep wary pigs from grazing. But after about an hour, they trotted out by the dozens: Sows, piglets and — in the distance — an enormous boar. As soon as he saw it, Jones got excited, tracking its outline with his infrared scope. Occasionally, it let out a squeal.

“Chase is going to do his best to put a stalk on that pig,” Jones said as he watched. “Oh yeah, he’s moving towards him!”

Last week, Hawkins sent an email announcing the next contest to begin in February. He included a few new rules for hunters using drones (follow all laws on using them) and said weigh-ins will now occur 24 hours at a new location with guaranteed appeal to hunters: Backyard Taxidermy & Processing.

He’s expecting lots more competitors this time around. “After last year’s big pots,” Hawkins wrote, “we expect this year to be even bigger.”