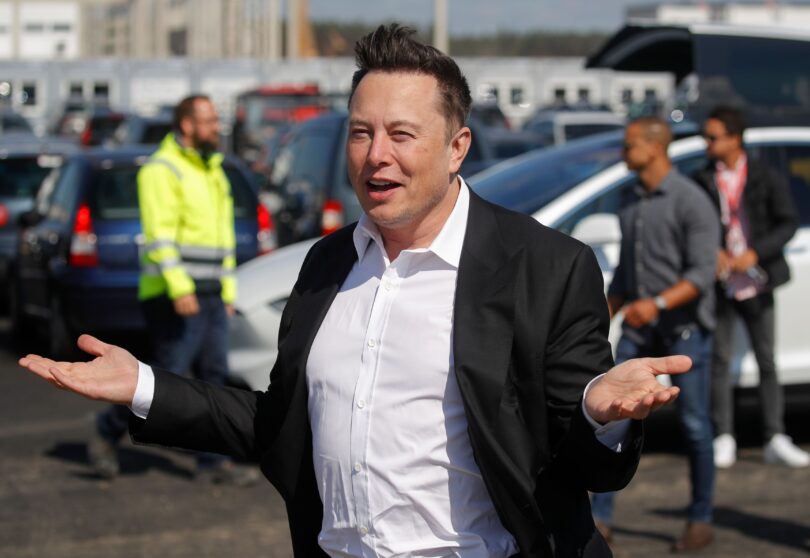 Tesla CEO Elon Musk gestures as he arrives to visit the construction site of the future US electric car giant Tesla, on September 03, 2020 in Gruenheide near Berlin.

Tesla will be added to the S&P 500 in a single step despite its more than $500 billion market capitalization, S&P Dow Jones Indices said on Monday, forgoing a possible phased approach that was considered to ease the impact of adding such a large company to the U.S. stock benchmark.

The stock will be added at its full float-adjusted market capitalization before the open of trading on Dec. 21, the index provider said. Float-adjusted means that only shares available to the public are considered when evaluating a company’s weighting. The company that Tesla will replace will be named on Dec. 11, according to a press release.

The decision follows feedback from the investment community, which S&P Dow Jones Indices sought due to the difficulty of adding a company of Tesla’s size. The electric vehicle maker will be the largest company ever to be added to the S&P 500.

S&P Dow Jones Indices announced that Tesla would join the S&P 500 earlier in Nov., at which point it said it was considering whether Tesla should be added all at once prior to the market open on Dec. 21, or in two tranches on Dec. 14 and Dec. 21.

“In its decision, S&P DJI considered the wide range of responses it received, as well as, among other factors, the expected liquidity of Tesla and the market’s ability to accommodate significant trading volumes on this date,” the index provider said. Tesla’s addition to the S&P 500 will coincide with the expiration of stock options and stock futures, among other financial instruments, which should help facilitate the addition because of the high trading volume that day.

“The fact that when S&P originally made the announcement they sought feedback from the investment community on how to handle the addition tells you all you need to know to show how unique a situation this is,” noted Bespoke Investment Group founder Paul Hickey.

Tesla stock has jumped nearly 40% since the announcement that it would join the index, bringing its year-to-date gain to nearly 580%.

Hickey attributed the recent rally in shares to anticipation that the stock will need to be bought by money managers.

There’s currently over $11.2 trillion in assets benchmarked to the S&P 500, with roughly $4.6 trillion of the total in indexed funds, according to S&P Dow Jones Indices. The index provider said that Tesla’s addition will “generate one of the largest funding trades in S&P 500 history” as portfolio managers sell positions in order to make way for Tesla.

“Where it gets interesting is in the other stocks that index funds will have to sell in order to make room for TSLA,” Hickey added.

Goldman Sachs recently estimated that Tesla’s addition could result in $8 billion in demand from active U.S. large-cap mutual funds. When index funds are thrown into the mix, that figure is substantially larger.

The company’s inclusion in the S&P 500 was viewed as a foregone conclusion after Tesla reported its fourth straight quarter of profits in July — the final hurdle standing in the company’s way. But it was passed over during the S&P 500’s September quarterly rebalance, which sent shares momentarily tumbling.

The make-up of the S&P 500 is determined by what’s known as the “Index Committee” at S&P Dow Jones Indices, which analyzes quantitative as well as qualitative factors. Ultimately, the index is meant to be representative of the U.S. market as a whole.

Shares of Tesla gained more than 4% in extended trading following the announcement.

Subscribe to CNBC PRO for exclusive insights and analysis, and live business day programming from around the world.