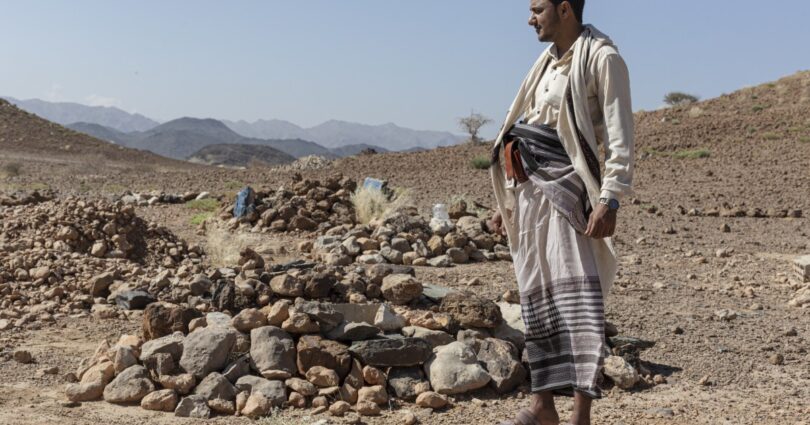 It was a serene spot for a makeshift graveyard; the migrant smuggler had chosen well.

The sand-swept field just outside this city was far enough from the highway to be quiet but not so far as to be inaccessible. It had eight graves — shallow rock mounds, their headstones spray-painted with blue scrawl — overlooking a mountain landscape.

“I had to put them here because no one would accept them in any other cemetery,” said Ahmad Dabisi, a 29-year-old human smuggler whose boyish looks belie the seriousness of his trade.

For the eight people buried here — all of them his clients— the field was the final stop in a country that was only ever supposed to be a waystation. Spurred by poverty or conflict, they and tens of thousands of other migrants left their homes in East Africa — despite coronavirus restrictions — with Saudi Arabia in their sights, seeking safety and economic opportunity.

Instead, they find themselves trapped in Yemen, ensnared by the country’s multi-sided civil war and its labyrinthine front lines. They have little chance to escape the limbo.

Thousands wait here in Ataq, the capital of Shabwa province, eking out a threadbare existence on the streets.

“We’re not alive, we’re not dead. We’re just sitting here,” said Ahmad Ali Abdo, 40, who had come from Somalia nine months ago. Unable to get across the border into Saudi Arabia, he now carries a bucket and sponge and offers an indifferent carwash to passing motorists, often making less than a dollar a day.

“I know there’s a war here, but I want Saudi Arabia. At least there, if they catch me, they’ll send me back to Somalia,” he said.

Last year, almost 140,000 migrants from the Horn of Africa attempted to traverse Yemen, a record high. Even with the coronavirus sealing borders, more than 34,000 migrants have tried the crossing this year, according to the International Organization for Migration, or IOM.

The journey is long, complicated and perilous. It often begins in Ethiopia, where some 94% of the migrants in Yemen originate, most of them farmers and a little more than half of them with only a primary school education. For many, it’s not the first time they’ve tried to emigrate.

They make their way to Obock, a coastal town in Djibouti that was once the site of the region’s first French colony, or Somalia’s Bosaso port. Both are launchpads into Yemen, across the Gulf of Aden.

“I studied for a bit and worked in a farm in Ethiopia,” said Hassan Mahmoud, a 21, who traveled to the Ethiopian border city of Jijiga and from there to Bosaso. “Some of my friends heard from others there was work in Saudi Arabia, so we came.”

The first part of the trip cost Mahmoud 10,000 Ethiopian birrs, or $260, paid to a local smuggler with contacts in Yemen. He handed over a similar amount for the gulf crossing, which took 24 hours in a small boat with 120 other passengers and no food or water.

He arrived in Bir Ali, a village on Shabwa’s Red Sea coast with resort-worthy white-sand beaches and turquoise waters, and then walked for more than a week to reach Ataq. (Those who can afford it take a car for about $27.)

Here he remains. Passage to Saudi Arabia is now closed. With no money, Mahmoud has been sleeping on Nasr Street, Ataq’s main boulevard, at night, and scrounging for work in the mornings.

“There are no jobs here, and there’s no road to Saudi Arabia. I’ll try to go back home soon,” he said.

Still, he is one of the luckier ones.

Mohammad Abu Bakr, 26, worked in Yemen for five months to gather enough money to continue northward. Then he crossed the front lines of the civil war to reach Saadah, Yemen’s northernmost province, which is on the border with Saudi Arabia and is controlled by the Houthis, a rebel group backed by Riyadh’s nemesis, Iran.

The Houthis had marched into the Yemeni capital, Sanaa, in 2014, before moving into other provinces in a bid to control the country. In response, a coalition headed by Saudi Arabia launched a brutal air campaign as well as a full blockade that has brought Yemen to the brink of famine.

Despite the war, migration continues across the border through smuggler crossings that snake through the mountainous terrain between the two countries.

The coronavirus has meant tighter border controls. The Houthis caught Abu Bakr and kept him in prison for 50 days, he said. Ordinarily he would have had to pay what the Houthis called an exit fee of 1,000 Saudi rials — or $267 — to get out, but the prison became so overcrowded that his captors loaded him and some 180 others into cattle trucks, drove them across battle lines again to the south and dumped them in the desert.

Abu Bakr was able to make his way back to Ataq, where, like Abdo, he tries to make some money washing cars.

Houthis aren’t the only danger. Checkpoint guards frequently take migrants’ money and cellphones, said Dabisi, the smuggler. Some of his competitors, often in collusion with local authorities, round up migrants after they come ashore or pay rival smugglers to give up their clients, whom they then spirit away to dens to be tortured and beaten until their families pay ransom.

“My competitors offer to pay me 20,000 Saudi rials per person — more than I would get from the migrants,” Dabisi said. “But it would ruin my reputation. Why do people come to me? Because I offer a good service.”

Dabisi’s older brother, Jamal, was the first in the family to offer that service, but he was killed six years ago in a fight over migrants. Since then, Dabisi has taken over, turning his home village into a hub through which he has, by his estimate, ferried more than 100,000 people.

At more than $100 per migrant, it was a lucrative business. Before, Dabisi worked as a bus driver, barely covering his expenses; now he is a node in a multi-country network, liaising with hundreds of Ethiopian facilitators, Somali boat captains, Yemeni drivers and tribesmen through instant-messaging apps on his five cellphones.

In the state’s eyes, smugglers like Dabisi are both cause and cure for its migrant problem. The government had cracked down on smugglers in 2016 and rounded up 20,000 migrants but found itself unable to feed or house them.

The security situation meant it also had other priorities. That has forced government officials into a sort of uneasy detente that allows Dabisi and other smugglers to move migrants through Shabwa as long as they do it quickly.

“Even if they would arrest Dabisi, it won’t matter. Migrants are coming every day. If not him, then someone else would do it,” said Ahmad Aidrus, a migration researcher from Shabwa.

Dabisi is still able to take his human cargo across the border, but it has become a much more difficult — and expensive — process.

“I could only take seven people, and I had to move them from place to place and get them across within a small car,” he said.

Many migrants have given up on making the final leg to Saudi Arabia and want to turn back. But Ethiopia has refused to take any more returnees because of the coronavirus, and Saudi Arabia has stopped its deportation flights and instead put migrants in prison. The IOM is still preparing repatriation flights for about 14,500 stranded Ethiopians.

Even a return to East Africa by boat, back across the Gulf of Aden, is difficult.

“Smugglers take them close to the coast and make them swim the rest of the way because there are possibly coast guard or security forces,” said Olivia Headon, public relations officer for IOM in Yemen. “So they’re doing it to protect their own necks while putting migrants’ lives at risk.”

Information on migrants who lost their lives in the crossing is sparse, Headon said, but “whatever figure there is is way too low.”

That comes as little surprise to Aidrus. The dead migrants in Dabisi’s makeshift graveyard, Aidrus said, were probably buried quickly to avoid the inevitable bureaucratic tangle.

Dabisi demurred from specifying how his clients died, amid rumors that some had been shot in a quarrel with other travelers. In any case, he had collected the bodies, sent pictures of them to their families to confirm their identities and then brought them to the field for burial.

But the resting place is likely to be temporary. The last time he had come to dig a grave, Dabisi said, local residents had threatened him and ordered him to remove the bodies; some construction was to start soon on the field.

“They came and raised their guns at me, told me I had to stop burials or they’ll shoot me,” he said, glancing back at one of the mounds.

“I’ll have to move these bodies to my village.”