For the Supreme Court’s extremely conservative new majority, failure to sufficiently discriminate in favor of religion is discrimination against religion.

Balancing public health against the right to free exercise of religion poses a difficult challenge amid the COVID-19 pandemic. Accordingly, when cases from California and Nevada reached the Supreme Court earlier this year, the justices deferred to the judgment of their governors, who are, after all, accountable to the people.

But those cases were decided by narrow 5-4 margins before Justice Ruth Bader Ginsburg died in September. The court changed its tune late Wednesday night, when her replacement — Amy Coney Barrett — and the four earlier dissenters formed a new 5-4 conservative majority that invalidated restrictions on worship services in hot zones designated by New York Gov. Andrew Cuomo.

The ruling in Roman Catholic Diocese of Brooklyn v. Cuomo, brought by Catholic and Orthodox Jewish congregations, was especially notable because it was unnecessary. As Chief Justice John Roberts explained in his dissent, by the time the court ruled, the New York houses of worship were no longer “subject to any fixed numerical restrictions.” The opinion, then, did nothing more than admonish New York to stop doing something it had already stopped doing. Even if the case wasn’t technically moot, there was no reason for the highest court in the land to intervene, without an oral argument or deliberation, to grant extraordinary relief.

The Roman Catholic Diocese ruling is also far-reaching in its substance. The unsigned majority opinion decries what it deems discrimination against religion because worship services were subject to capacity limits while some essential business were not. Likewise, Justice Neil Gorsuch complains in a concurrence that under some circumstances, New Yorkers in a hot zone were permitted to crowd into a liquor store or a bike shop but not a church, synagogue or mosque. Justice Brett Kavanaugh registers the same complaint about grocery stores and pet shops.

Those comparisons are inapt. Government discriminates illicitly when it fails to treat like cases alike. One needn’t discount people’s spiritual needs to recognize that liquor stores, bike shops, groceries and pet shops differ from churches, synagogues and mosques with respect to public health. The risk of coronaviral spread is not merely a function of the number of people at a venue; it increases dramatically as they linger in a stationary position, especially when they speak or sing.

Though religious gatherings face greater restrictions than less risky activities like shopping, they are actually treated more favorably than comparably risky secular activities, such as public lectures, concerts and theatrical performances — as the trial judge in the Roman Catholic Diocese case observed. For the Supreme Court’s new and extremely conservative majority, it seems, failure to sufficiently discriminate in favor of religion counts as discrimination against religion. 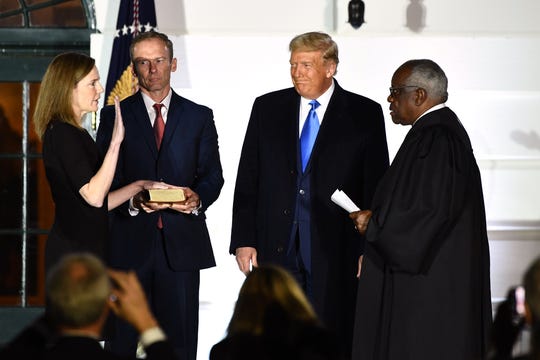 Moreover, the Roman Catholic Diocese majority didn’t appear to appreciate the challenge Cuomo faced. Any line the state draws in this realm is bound to be crude, but the alternatives are still worse. A blanket ban on all large gatherings with no exceptions whatsoever would be excessive; no restrictions on gatherings would have literally deadly consequences; and highly specific determinations, focusing on, say, the duration or volume of songs, would entangle religious institutions with government.

To be sure, the court’s disregard for the state’s quandary and extreme solicitude for religious plaintiffs is not exactly surprising. Even before Ginsburg’s death, the case law was moving towards an expansive conception of impermissible discrimination against religion and a scaled-back requirement of church-state separation. Yet Wednesday’s decision broke new ground in suggesting that as religious rights expand, other rights will contract.

To see what was at stake in Roman Catholic Diocese, consider the leading precedent establishing the power of government officials to limit individual freedom for the sake of public health. In the 1905 case of Jacobson v. Massachusetts, the court rejected a challenge to a local smallpox vaccination requirement. Chief Justice Roberts cited Jacobson in the California case to support the proposition that the Constitution places primary responsibility for guarding the health and safety of the people in the hands of elected officials.

A focus on liberty as people are dying

In Wednesday’s ruling, Gorsuch appeared to cast doubt on the continuing vitality of the Jacobson precedent. He observed that Jacobson predates the court’s modern individual rights jurisprudence; it applied what we would now call the very deferential rational basis test. Was Gorsuch suggesting that the more searching test of strict scrutiny, widely considered so demanding that it is “fatal in fact” for nearly any policy subjected to its strictures, should apply to public health measures?

Such a suggestion would echo recent statements by Attorney General William Barr and Justice Samuel Alito describing assembly limits and shelter-in-place orders as extreme restrictions on liberty. They are indeed extreme, but when over a quarter million Americans have already died from a plague now raging out of control, it is at best tone deaf to focus on the temporary loss of liberty to the near exclusion of the permanent loss of life.

There is a more chilling reading of what Gorsuch wrote about Jacobson, however. He described Jacobson’s claim as “an implied ‘substantive due process’ right to ‘bodily integrity’” of the sort that some jurists “have found hiding in the Constitution’s penumbras.” These phrases are a legal dog whistle. Each of those terms— substantive due process, bodily integrity and penumbras — is closely associated with Supreme Court precedents recognizing a right to privacy that encompasses contraception, abortion, child-rearing, choice of sexual partners, control over one’s intimate private information, and determination of how one faces death. Religion, Gorsuch clearly implied, is a genuine constitutional right enshrined in the text, whereas these other rights are just made up and not entitled to similar respect.

There is extreme irony here. For one thing, the Religion Clauses of the First Amendment by their terms limit Congress, not state governments. It is only through the doctrine of substantive due process that the court has made religious liberty applicable to the states in a case like Roman Catholic Diocese. And once one acknowledges that the Fourteenth Amendment “incorporates” the Bill of Rights against the states, there is no good reason to exclude the Ninth Amendment — which was proposed and ratified alongside the First and which specifically instructs courts not to do exactly what Gorsuch did in his Roman Catholic Diocese concurrence: “to deny or disparage” unenumerated rights.

Needless to say, we hope that the conservative majority would not really jettison the constitutional right to bodily integrity. If, as Gorsuch implied, the Constitution subjects laws governing the human body to only minimal scrutiny, then laws mandating abortion would be valid, because such laws rationally advance an interest in population control and could be put to frightening eugenic ends.

Health care on the chopping block: I’m a cancer survivor, but I might not survive Amy Coney Barrett on the Supreme Court

Nor would Gorsuch’s drastic overhaul of the Constitution stop at the human body. If there are no unenumerated rights, then there is no right to privacy of any sort — a truly radical position espoused by the late Justice Antonin Scalia, joined by Justice Clarence Thomas, in a 2011 case. So long as the government comes into possession of people’s most intimate secrets without conducting unlawful surveillance, they said, the Constitution provides no protection against their disclosure.

Whether five justices would ultimately sign onto the constitutional vision Gorsuch laid out in the Roman Catholic Diocese case remains to be seen. One can only hope that they will not take that position to its logical conclusion.

After introducing his foreign policy team last week, President-elect Joe Biden proclaimed that “America is back.” In important respects, that will be true come Jan. 20, 2021. But at the Supreme Court, America is increasingly unrecognizable. A court that affords no protection to unenumerated rights to bodily integrity and privacy while simultaneously eroding the separation of church and state would look less like our familiar institution and more like the highest judicial authority of a place like Gilead — the theocratic and misogynist country in Margaret Atwood’s dystopian “Handmaid’s Tale.”