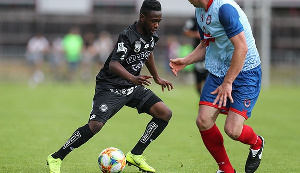 The talented midfielder has been included in the squad after impressing for the junior side over the past few years.

The 18-year-old is the son of former Ghana striker Charles Amoah, who scored two goals in 2 caps for the Black Stars.

Winfred Amoah joins compatriot Gideon Mensah, who has joined the side on loan from Red Bull Salzburg.

After the departure of Markus Pink to Admira), Michael John Lema to Hartberg / Leihe and Fabian Koch to WSG Tirol), SK Sturm are filling their attacking options with two promising talents.

On the one hand with the youth international of Kosovo Dardan Shabanhaxhaj, on the other hand with the son of ex-football player Charles Amoah, Winfred Amoah.

The squad is replenished with young blood. The two attacking players Winfred Amoah and Dardan Shabanhaxhaj come, as Sky Sport reports, from Sturm Graz amateurs, who lead the table of the Regionalliga Mitte with three points.

Amoah, who normally plays on the wing, has featured in 15 games scoring three goals this season.

The son of Sturm- and LASK-Kicker Charles Amoah was born in St. Gallen in Switzerland, but holds Ghanaian and Austrian citizenship.