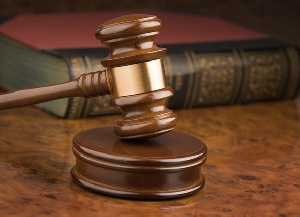 The Kumasi Metropolitan Assembly (KMA) Court has granted a bail of GH¢30,000 to a 19-year-old student for allegedly possessing two wrappers of dried leaves suspected to be Indian hemp, a narcotic drug.

Abdul-Rahman Yakubu pleaded guilty of possessing a narcotic drug, but the court held that the substance had not been tested and as a result granted him bail until March 31 to enable the police to conclude their forensic tests.

Police Inspector Michael Koole, prosecuting, told the court presided over by Abdul-Razak Musah that the suspect was arrested on February 24 at Afrancho, near Akomadan.

He said the complainant, Nana Kwaku Bonsam, a fetish priest, owns a piece of land at Afrancho, which had been turned into a smoking hub by narcotic users.

The prosecution said the complainant went to the said location and met the suspect and when he was queried the suspect could not give any tangible explanation.

He said the complainant then caused his arrest with the help of other witnesses and when they conducted a search in his bag, two wrappers of dried leaves, suspected to be Indian hemp, were found.

Prosecution said the suspect was later handed over to the Afrancho police together with the exhibits for further investigations, adding that the suspect claimed ownership of the exhibits in his caution statement.