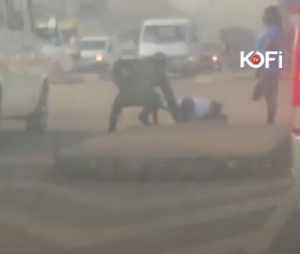 It perhaps would be the last time they decide to cross any road when there is a footbridge, not with this remarkable ‘punishment’ from a military man on duty.

It has become a burden for authorities, the indiscriminate crossing of roads at the Madina Zongo Junction, especially because these same people requested for this footbridge to curb the constant accidents and deaths on that stretch.

But no, the footbridge is far away from their crossing point, again, it is too long and winding, in short, ‘too much work’ which nobody wants; they would rather go the easy way.

You could say their cups were full on this day, when these two gentlemen who were not ‘lucky’ were caught by the military man, trying to break the law and to go the ‘soldier’ way, he told them to ‘go down’ and give him some push-ups.

On the pavement right at the junction where he was about to cross, the first man laid down and experienced military life for a short period.

Seeing that he wasn’t doing a very good job, the soldier went, put his hand down on a particular spot and motioned for the man to go down till his chest touched his hand.

Another unsuspecting passer-by was called to join in the exercise after he tried to also cross instead of using the footbridge.

This follows a military raid at the same area in November 2019 after another pedestrian was knocked down by a speeding vehicle while trying to cross the road.

Some over 50 pedestrians were arrested by the Madina Police for failure to use the facility after its construction.

Authorities awarded construction of the footbridges in November 2018 following a series of protests as a result of the high death toll of road users knocked down on the stretch.

However, after its completion, residents still refused to use the footbridges citing its long-zigzagged path till the military arrived.