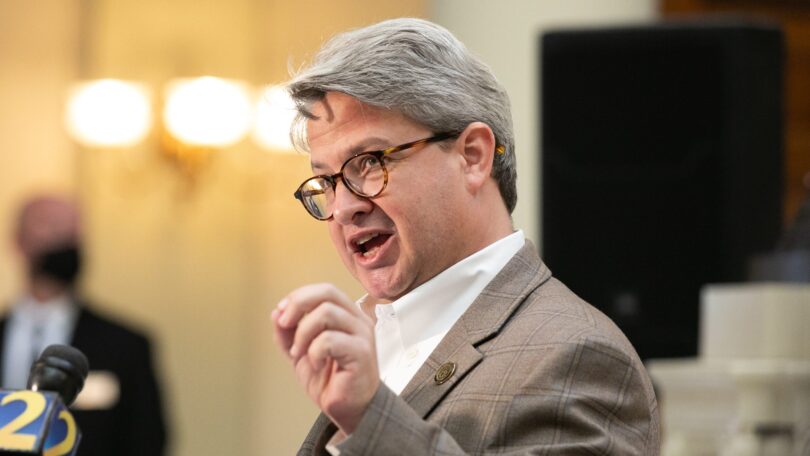 Georgia’s governor has certified results showing Joe Biden won the presidential race over President Donald Trump. But the Republican governor did not clearly endorse the results, saying the law requires him to “formalize the certification.” (Nov. 20)

WASHINGTON — A top election official with the Georgia Secretary of State’s Office on Tuesday called on President Donald Trump to condemn and “stop inspiring” recent threats of violence as the state finishes a second recount of the presidential election.

“It has all gone too far,” said Gabriel Sterling, Georgia’s voting system implementation manager, raising his voice. “All of it.”

Visibly angry, Sterling spent several minutes of an afternoon news conference describing threats targeting state election officials and workers. He said a 20-year-old tech employee in Gwinnett County received death threats and was made the subject of a noose image disseminated online Tuesday that read he should be “hung for treason.”

The senators Sterling referenced are Georgia’s two Republican U.S. senators, David Perdue and Kelly Loeffler, who are running in runoff elections on Jan. 5 that could decide control of the Senate.

As Trump refuses to concede his election loss to President-elect Joe Biden, he has repeatedly attacked Georgia Secretary of State Brad Raffensperger and Gov. Brian Kemp, both Republicans, after an initial state-ordered recount affirmed that Biden won Georgia by 12,284 votes. After Biden’s Georgia win was certified, the Trump campaign requested a second recount, which is expected to be finished by the end of Wednesday.

Sterling, who is also a Republican, said people have trespassed on Raffensperger’s property and driven caravans outside the secretary’s home. He said Raffensperger’s wife has received “sexualized threats” on her cell phone. Sterling has police protection outside his house, he said.

Sterling brought up comments from Trump attorney Joe diGenova, who said Monday that former Director of the Cybersecurity and Infrastructure Security Agency Chris Krebs should be “shot.” Sterling called Krebs “a patriot.”

More: Trump campaign lawyer stirs outrage by saying ex-cyber chief should be ‘taken out at dawn and shot’

“This is elections. This is the backbone of a democracy. And all of you who have not said a damn word are complicit in this,” Sterling said. “It’s too much. Yes, fight for every legal vote. Go through your due process. We encourage you. Use your First Amendment. That’s fine. Death threats, physical threats, intimation – it’s too much. It’s not right. They’ve lost the moral high ground to claim that it is.”

Sterling said the election worker, whose name he did not identify, is a contractor for the voting machine company Dominion Voting Systems – a regular subject of false claims that Trump and his allies have pushed to argue the election was stolen. He said the worker was captured on video transferring a report from a computer, which was made to look like he was “manipulating election data.”

“He was just trying to do his job,” Sterling said, adding that the worker’s family members have also received threats. “His family is getting harassed now. There’s a noose out there with his name on it.”

Trump responded to Sterling’s remarks in a tweet that doubled down on the president’s baseless claims of a “rigged election.” Trump did not condemn the threats of violence.

A spokeswoman for Perdue said the senator “condemns violence of any kind, against andbody. Period,” WSB-TV Atlanta reported. But she added, “We won’t apologize for addressing the obvious issues with the way our state conducts its elections.”

More: Georgia secretary of state: My family voted for Trump. He threw us under the bus anyway.

Most of Sterling’s comments were directed specifically at Trump.

“Mr. President, it looks like you likely lost the state of Georgia,” he said, acknowledging Trump has the right to go through the court system.

Still speaking to Trump, Sterling said “people aren’t giving you the best advice on what’s actually going on on the ground.”

“It’s time to look forward. If you want to run for reelection in four years, fine do it. But everything we’re seeing right now, there’s not a path. Be the bigger man here. Step in. Tell your supporters, ‘Don’t be violent. Don’t intimidate. All that’s wrong It’s un-American.'”

Sterling said the threats aimed at the 20-year-old election worker was “the straw that broke the camel’s back.”

“I can’t begin to explain the level of anger I have right now over this. And every American, every Georgian, Republican and Democrats alike, should have that same level of anger.”