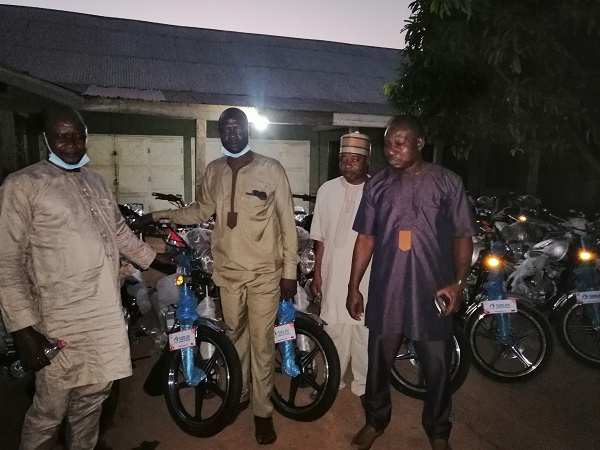 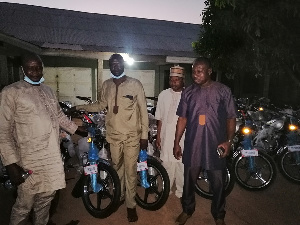 The former National Vice Chairman of the NPP, Mr. Stephen Ayensu Ntim has donated 20 Sonlink motorbikes to the NPP in the Northern Region.

The donation forms part of the NPP’s Stewart and Financier campaign strategy dubbed “Stephen Ntim says:4 more for Nana'”, aimed to support campaign activities of the party across the country.

The campaign which was launched some months ago has since taken a center stage of the NPP campaign.

The 20 motorbikes are meant for each constituency in the Northern Region.

The gesture aims at enhancing the campaign activities of the New Patriotic Party (NPP) in the constituencies and the Region to retain President Akufo-Addo and win the Tamale seats for the NPP in the upcoming December 07, 2020 Elections.

The Northern Regional Chairman of the NPP, Mr Mohammed Bantimah Adam Samba who received the motorbikes in the present of all the regional executives and constituency executives at a ceremony in Tamale thanked Mr. Stephen Ayensu Ntim for the gesture, saying that, the former National Vice Chairman of the party has really shown that ‘he is a real party man’.

According to him, Mr Ntim massive support for the party cannot be overemphasized, adding that, it is usual of him [Stephen Ntim] as far as the NPP is concerned. “On behalf of all constituencies, I thanked Chairman Ntim for the motorbikes, Allah will bless him”.

The Chairman of the Stephen Ntim-4 more for Nana Campaign for the Northern Sector, Alhaji Fuseini Musah who presented the motorbikes on behalf Mr Stephen Ayensu Ntim urged the NPP executives and campaign managers to work very hard to retain President Nana Akuffo-Addo and win more parliamentary seats for the party come 7 December 2020.

Alhaji Fuseini who is also a financier of the NPP in the region assured all the constituencies of the resolved by Mr Stephen Ayensu Ntim to provide them with campaign logistics for victory come 7 December 2020 elections.

Alhaji Fuseini Musah hinted that the Stephen Ntim, “We will not rest until victory is assured and all our parliamentary candidates win their seats. The Stephen Ntim campaign team will not sleep…. We will be visible in all the constituencies to preach the gospel of Nana Akuffo-Addo and the NPP for victory Insha Allah come 7 December “