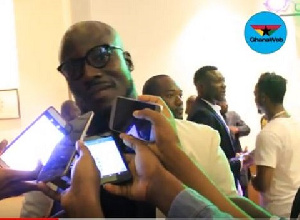 Almost a decade after his retirement from international football, Stephen Appiah is still receiving commendations for his leadership qualities particularly for the Black Stars.

Appiah was Black Stars skipper for five years, leading the team to two FIFA World Cups including a historic quarterfinal finish at the 2010 edition in South Africa.

Appiah assumed the captaincy role at a time when disunity had become endemic in the Black Stars causing the team to miss out on some international tournaments and finals from 1992 to 2005.

Appiah’s reign as Black Stars captain saw a breath of fresh air where there was utmost respect and unity among players of the team.

His era also saw remarkable success being chalked by the Black Stars and he has often been praised for being a unifier.

At the launch of Betway’s 12th man initiative at the Alisa Hotel on Wednesday, celebrated sports broadcaster Kwabena Yeboah eulogized the Tonardo and praised for the unity and discipline he instilled in the team.

According to the veteran broadcaster, Appiah is the best example of leadership he has seen in the Black Stars.

“I have been around for while and watch football for decade. I have seen a lot of captains of national teams for decades but I always stress that the best captain I have met in my entire journalistic life is Capitano, Stephen Appiah. This is a man whose captainship he ensured he did not lord over the players and they reciprocated and no wonder during his tenure, Ghana football was at the pinnacle”, he said.

Stephen Appiah made 65 caps for the Black Stars and scored fourteen goals.

His last major tournament was the 2010 World Cup in South Africa.