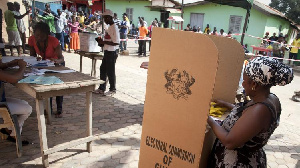 The Catholic Diocese of Navrongo-Bolgatanga has organised a day’s forum to build the capacities of stakeholders towards sustainable peace before, during and after the 2020 elections.

It was carried out by the Good Governance, Justice and Peace Commission (GGJPC) of the diocese at Pusu-Namoo in the Talensi District of the Upper East Region, as part of efforts to contribute towards sustainable peace in the country.

Speaking at the forum, Mr Dominic Abugre, the acting Director of GGJPC, said the project had identified, formed and trained 637 Community Peace Facilitators in various communities to work towards building peaceful coexistence.

He said the programmes developed under the project aimed at enabling the respective communities build peace structures to handle conflicts amicably and thereby address, through non-violence means, any differences that might arise during the elections.

The forum brought together, Traditional Authorities, Assembly men and women, Peace Agents, and opinion leaders among others.

Dr Joseph Ayembilla, the Human Resource Development Coordinator of the Diocese, who facilitated the forum, said the Diocese’s main focus was to help develop the human resource base, which would help foster peace and unity among the people.

Reverend Father Lawrence Azure, the Vicar General of the diocese, urged stakeholders to beware of people within their societies who promote conflict for personal gain.

He asked the stakeholders to use their influence to work together,educate members of the public especially the youth on the need to ensure peace during the electioneering year and how it could contribute to sustainable development.