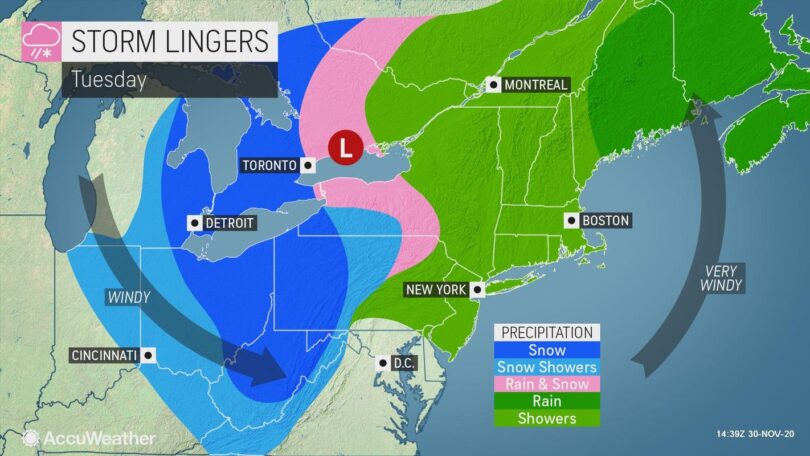 Rime ice occurs when ice forms on the outside of objects such as trees when water in cold fog freezes.

Tuesday – the first day of meteorological winter – will feature a winter storm for portions of the Great Lakes, Ohio Valley and Appalachian mountains.

As much as a foot of snow is possible in some areas, mainly in northeastern Ohio, northwestern Pennsylvania and western New York State, according to the National Weather Service.

Meteorologists warned motorists in those areas to be prepared for rapidly deteriorating conditions through Wednesday.

Winter weather advisories and winter storm warnings were in effect for much of Ohio, eastern Kentucky, West Virginia and western Pennsylvania.

In West Virginia, where up to 7 inches is possible, the snow will be a boon to some of the state’s ski resorts that are scheduled to open for the season later this week.

Accumulating snow also is expected in the Appalachians as far south as Tennessee, western North Carolina and far northeast Georgia, according to the Weather Channel.

Strong winds will accompany the snow, particularly near the shores of the Great Lakes and over the Appalachians, the Weather Channel said. 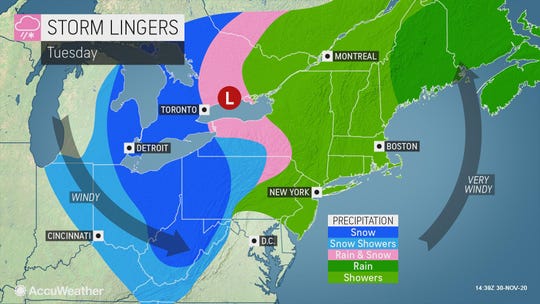 In the South, the weather this week may be more typical of early January with temperatures that are 10 to 20 degrees below average for early December, AccuWeather said.

New England will see a mild, stormy day on Tuesday: Heavy rain and windy conditions are likely across portions of New England, the Weather Service said.

Portions of Maine could see record high temperatures near 60 degrees on Tuesday before a cold front passes through.