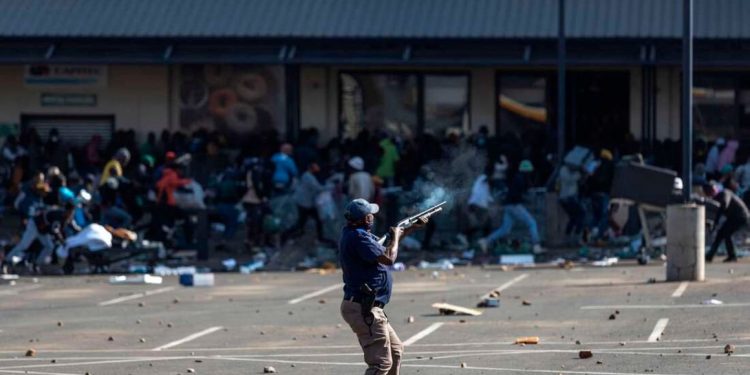 Six people have so far been confirmed dead amid #FreeZuma protests in South Africa, where the army has been deployed to quell tension.

The protests were allegedly organised by supporters of incarcerated former President Jacob Zuma, 79, who are calling for his release.

Zuma was jailed for 15 months for contempt of court and is serving the term at Estcourt Correctional Centre in KwaZulu-Natal, where he handed himself over last Wednesday.

More than 300 people have been arrested by police over links to the the torching of trucks, looting of shops, burning of tyres and the blocking of some major highways.

Most shops were closed on Monday as some business owners feared their establishments would be attacked.

“On Sunday morning, the police responded to a call from Alexandra Clinic, where they found a body with gunshot wounds. Later that day, the body of a security guard with assault wounds was found at Jeppestown,” the South African Police Service said in a statement.

“The third body was also discovered on Sunday evening in Dobsonville while the fourth body was discovered with gunshot wounds in Germiston,” the service said, adding one of the victims was a security and that investigations would establish the exact causes of death.

“In KwaZulu-Natal there is a report of two people who have been killed, one in Inanda and the second one in Umbilo. The circumstances leading to their deaths are under investigation.”

With the police struggling to contain the protests, the South African National Defence Forces (SANDF) has since been deployed in areas regarded as “hot spots” in Gauteng and KwaZulu-Natal.

“The SANDF has commenced pre-deployment processes and procedures in line with a request for assistance received from the National Joint Operational and Intelligence Structure, to assist law enforcement agencies deployed in Gauteng and KwaZulu-Natal to quell the unrest that has gripped both provinces in the last few days,” the SANDF said in a statement.

“The deployment will commence as soon as all processes are in place. The duration and number of soldiers will be determined based on the assessment of the situation on the ground by the relevant law enforcement agencies.

“Furthermore, it must be emphasised that the SANDF’s deployment objective is to provide safety and a safe working environment for police and other law enforcement agencies while they carry out their constitutionally mandated law and order duties.”

Zuma was convicted of contempt of court after refusing to obey summons to appear before the Judicial Commission of Inquiry into Allegations of State Capture.

His incarceration first sparked a wave of protests in his home province of KwaZulu-Natal on Friday.

The violence escalated at the weekend and from Saturday night until Monday, some protests were reported in Johannesburg.

Johannesburg’s central business district and surrounding areas like Jeppestown, Berea, Malvern and Denver have been experiencing some unrest.

Alexandra, Bramley and Wynberg townships near the opulent suburb of Sandton were also affected by the violence.

The public is anticipating the outcome of the Constitutional Court’s ruling on Zuma’s application to have his jail sentence rescinded.

The apex court is yet to deliver its judgement after hearing arguments from his legal representatives on Monday.

The protests come as South Africa battles a third wave of Covid-19 infections, with most protesters seen without masks.