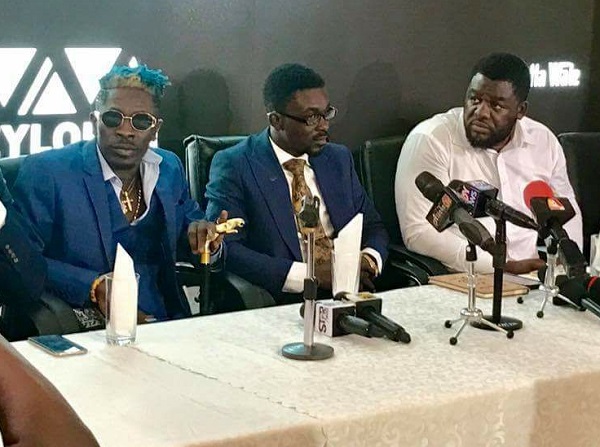 The deal with the ‘Ayoo’ hitmaker was announced Wednesday, January 31, 2018 at the company’s head office at East Legon in Accra.

It is rumored that the juicy deal with the free-spending record label is worth $1.5 million, a rolls Royce and a house.

He was thankful to the Chief Executive Officer of Zylofon Media, Nana Appiah Mensah for making him part of the Zylofon family.

“I am seeing today as a special day just because I was praying to God to give me a record label, not just a record label but a good one of course. Nana Appiah (CEO of Zylofon Media) has made it possible for me and I am happy about it.”

On his part, Nana Appiah Mensah stated that the signing of Shatta Wale was not to create competition between signees of the company but rather between Ghanaian artistes and foreign acts.

The leader of the Shatta Movement joins a stable which includes Stonebwoy, Becca, Kumi Guitar, Joyce Blessing, Obibini who were signed by the record label last year.

Shatta is famous for hit songs such as ‘Kakai,’ ‘Mahama Paper,’ ‘Ayoo,’ ‘Taking Over,’ which have in the past earned him a visit to the Presidency.

Zylofon Media Company Limited is a limited liability company duly registered and incorporated in Ghana by the company’s Act of 1963 (ACT 179).

They are a multimedia entertainment company established to supply profitable, acceptable, audio and visual entertainment to diverse domestic and international consumers.

Apart from its music activities, it also has a movie-making wing among other creative arts sects.

Recently, the company launched a fund for creative artists and a digital platform for creative people to monetize their creative works.

Charles Nii Armah Mensah Jnr is a Ghanaian-born producer and reggae/dancehall musician. He is known by his stage name Shatta Wale but was formerly called Bandana. Shatta won the Artiste of the Year at the 2014 edition of the Ghana Music Awards.

He reportedly traveled to Jamaica to study dancehall music. Wale made cameo appearances in the movies Never Say Never and Shattered Lives.