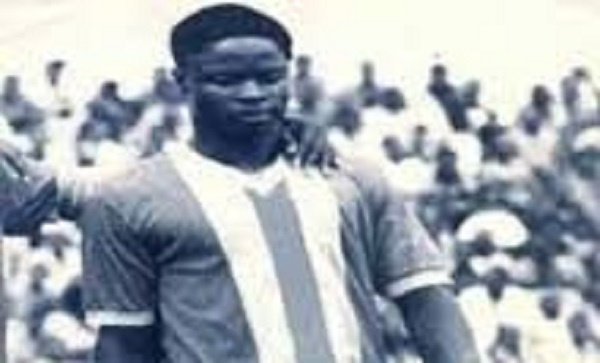 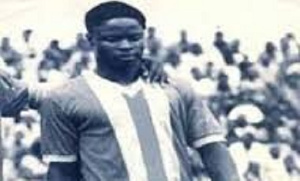 On this day 30 November 1997 (Exactly 23 years today) Shamo Quaye died in a mysterious manner in Ghana after returning from his base in Sweden.

He passed away while playing a fun match in Tema, 25 km east of Accra. It was reported that he was hit in the face by a ball during the game and died after being rushed to the hospital.

The 1996/97 Domestic football season in Sweden had just ended and Quaye had returned to Ghana for the holidays. Catching up with old friends for a ‘fun’ match, Quaye suffered a freak on – pitch accident that would end his 26-year – old life.

On this day 30 November 1997(Exactly 23 years ago today) Obuasi Goldfields(now Ashantigold FC) defeated Raja Casablanca of Morocco in the first leg of CAF Champions League. Lawrence Adjei scored the only goal in the 78th minute.

On this day 30 November 2001(Exactly 19 years ago today) The May 9 Stadium Disaster Relief Fund Management Committee presented its recommendations on how the 2.3 billion cedis collected should be disbursed.

Mr J.S. Addo, Chairman, said the thrust of their recommendation was to ensure that the children of the deceased and the permanently incapacitated people did not, as far as possible, suffer serious financial difficulties.

“We do not believe that any of the children should be school drop-outs because of financial constraints. “As a result, he said, the committee proposed an educational scheme based on the Ghana Education Service’s “bright but needy children” concept for them.

Mr Addo said the committee had also designed another scheme for the permanently incapacitated and other dependants of the deceased adding, “We hope government will be able to supplement this amount to increase the capital for the scheme to be sustained.”

He said that the capital at the Bank of Ghana had been invested to generate sufficient income to sustain the proposed scheme over the next 17 years.

On this day 30 November 1991(Exactly 29 years ago today) The United States of America claimed the inaugural FIFA Women’s World Cup tournament after beating Norway 2-1, before a crowd of 65,000 at Guangzhou’s Tianhe Stadium.

On this day 30 November 1872 (Exactly 148 years ago today) The first ever official international football match was played as Scotland took on England at the West of Scotland Cricket ground at Hamilton Crescent, located in Partick.

Scotland v England is therefore the oldest international fixture in world football. International football known today stemmed from that very clash in the west end of Glasgow 147 years ago.

Indeed, there were actually five unofficial international matches played between teams representing Scotland and England since 1870, none of which Scotland won.

Strangely, all players selected for the Scottish sides, and England sides, in these early unofficial internationals were mainly from the London area; with majority playing for the Scotland team not actually Scottish.

Although Scottish players from north of the border were invited to represent the Scottish team but very few took up the offer. It took a man called Charles Alcock, the FA General Secretary, to write a public letter in the Glasgow and Edinburgh newspapers offering a challenge for a team made up of Scots to face a team of 11 Englishmen.

This challenge would ignite a spark, for Queen’s Park Football Club decided to take Mr Alcock up in his offer. Robert Gardner and David Wotherspoon of Queen’s Park, whilst playing in London for a Queen’s Park FA Cup tie, stayed in the capital post-match to meet with the FA to arrange the fixture.

The match and location were agreed between the FA and Queen’s representatives with Wotherspoon writing a letter in the Scotsman confirming the news. Due to Edinburgh not being accustomed to association football code, both parties agreed Glasgow would be the best location for the tie. Very fittingly, the match was to be played on St Andrew’s Day 30th November 1872 at the West of Scotland Cricket Ground in Partick; with admission into the ground costing a shilling (ladies were admitted free).

People always draw the conclusion that the reason the Scotland National Team play in blue is because of the colour of the Scottish flag. However, the real tale is that the origin of the famous blue strip is from Scotland’s oldest association’s football club, Queen’s Park.

The blue jersey was in fact the Spiders’ original strip and because Queen’s Park took the responsibility to arrange the match, the team would play in blue-whilst featuring all Queen’s Park players. How the lion rampant badge was adopted as the Scotland badge is a fascinating tale.

Wotherspoon, who was playing the match, asked for his sister to source out lion badges to be stitched onto the jersey. Marion Wotherspoon used her talented skills to sew 11 lions to 11 blue shirts. What a lot of people don’t know is that the lions were actually white rather than red that has been suggested in old pictures and artwork. The red lion rampant would come later in 1882. The 11 thistles, each representing a player on the field, would later feature on the club crest from the early 1950’s.

England would play in white in the first official spectacle, wearing a badge consisting of three lions within a shield, in a similar stance to that of the English Coat of Arms, except that these lions were navy blue and the only distinguishable features were red eyes and mouths. A red and navy crown sat upon the top of the shield.

It is only from 1949 that the England emblem was introduced. The current England badge only has ten Tudor Roses scattered around the three lions as they represent the ten regional divisions, each of which has a seat on the Football Association Council.

Advertising for the game was very strong in the local press, to which buses were arranged to leave from Miller Street in the the centre of Glasgow to take punters to the match. Around 2500 spectators attended the historical match, intrigued by a new format of football. 2pm was the official kick-off time but the game would have a fifteen minute delay due to both team’s preparations before the match. Images sketched by William Ralston also reveal that England players warmed up for the match whilst smoking pipes.

The Scottish captain, Bob Gardner, who would play a further four times against England and lose only once, had been responsible for team selection. The future Scottish Football Association president had that year made the switch from forward to goalkeeper. He kept goal for his country for the first half similar to his English counterpart, Robert Barker, who decided to join the action outfield when he switched with William Maynard. Gardner would return between the posts during the second half.

Kirkie Smith was dribbling beautifully for England. They won a free-kick close to Scotland’s goal that with their great physicality up front, made the prospect of conceding a goal serious but Ker kicked the ball to safety. Weir and Leckie were in fine form for Scotland, causing England concerns. Leckie after a mazy dribbling run, took a shot at goal which struck the taped goal posts but instead of going under, went over. Ottaway also seen a shot saved by Gardner in the first half.

The match report from the Glasgow Herald shares: ‘Both sides were working hard, and showing excellent play. The Englishmen had all the advantage of weight, their average being two stone heavier than the Scotchmen and they had the advantage of pace. The strong point of the home club was that they played excellently well together.’

Indeed, both sides had contrasting styles. England’s players stated their aim to collect the ball and attempt to dribble past their markers, while the Scottish team took all by surprise; by playing a more passing game (or combination play as its described by some historians). The first of its kind ever seen, a term that would later be christened ‘Tika Taka’ in the 21st century.

England would be the stronger team in the second half, but both pushing hard to score. Right from kick-off Clegg would charge into the heart of the Scotland half. Applauds were sounded out around the ground after observing MacKinnon’s athletic overhead defensive kick up the pitch to safety.

After an end to end 90 minutes the match would finish in a goalless draw. An apparent fair result for both sides due to the match being very even. This game would go on to generate incredible passion from the supporters and inspire generation after generation to represent their country.

One memorable story from that match the Scottish Football Museum share is of Walter Arnott. Walter would not have enough funds to attend the match so would watch the game through a hole in the fence at the ground- with very limited viewing.

Arnott became so inspired and in love with this match that he made it his ambition to play for Scotland. To which he did, representing his beloved Scotland fourteen times. Interestingly, Arnott is also the Scottish player who made the highest number of consecutive appearances against England; playing against the Auld Enemy ten times.

Previously, the youngest champion had been Joe Louis, who was 23 when he won the title from Jim Braddock in 1937. Patterson’s mark was broken in 1986, when 20-year-old Mike Tyson defeated Trevor Berbick to win the WBC title. Tyson, like Patterson, was a protege of Cus D’Amato.

“The turning point came in the third round. I landed a left in his stomach and I heard him say, ‘ugh’ — or something like that. I knew then I had hurt him and I knew I could beat him.” – Floyd Patterson

“No, I really think that he said so much that he was worried himself. It gave me a world of confidence.” – Floyd Patterson, when asked if Moore’s popping off before the fight bothered him.

“I’m all right. The referee shouldn’t have stopped it. I felt Floyd Patterson is a vastly improved fighter. He has potentialities of being a great fighter when he gets some experience. I felt confident I could beat him, but I also learned that youth can be too much. I came up the long hard road, but when I got there I found the door slammed shut.” – Archie Moore