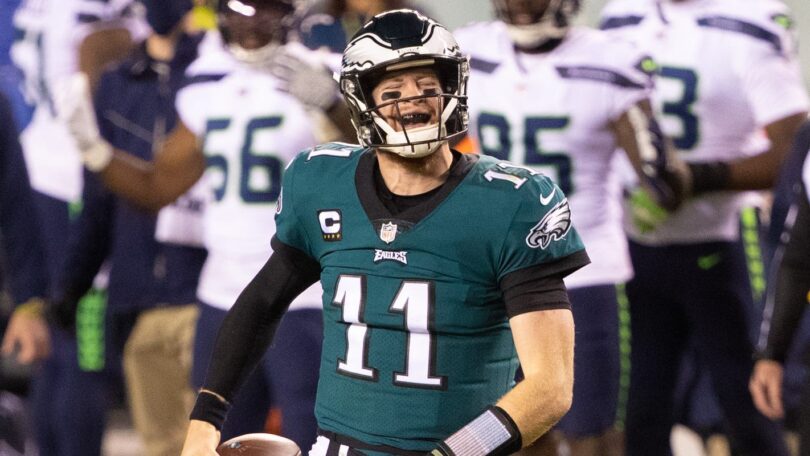 PHILADELPHIA — For those waiting for Jalen Hurts to take over at quarterback, it didn’t happen despite a dreadful performance from Carson Wentz and the Eagles’ offense.

Sure, Hurts got his customary few reps. He even threw a pass, this time with Wentz on the sideline for the first time this season.

But there’s a chance that could be changing soon.

That’s because Wentz and the Eagles couldn’t get anything going on offense in losing to the Seattle Seahawks, 23-17, on Monday night. The score was only within a touchdown because of a 33-yard TD pass from Wentz to Richard Rodgers with 12 seconds left.

Wentz completed 25 of 45 passes for 215 yards with 2 TDs and an interception. In all, the Eagles had just 250 yards against a Seattle defense that came into the game last in yards allowed per game at 435 per game.

Yet it took until 4 1/2 minutes remained in the first half for the Eagles to get their first first down of the game, and a minute later before the Eagles crossed into Seattle territory for the first time.

Then in the fourth quarter, when the Eagles had their best chance to get back into the game, Wentz threw an interception into the end zone on what appeared to be a miscommunication with tight end Dallas Goedert.

It was Wentz’s 15th interception of the season, an NFL high and a new career high for Wentz.

All of which was more than enough to drop the Eagles to 3-7-1, one-half game behind NFC East co-leaders the Giants and Washington.

It doesn’t get any easier for the Eagles, who’ll face the Packers (8-3) in Green Bay on Sunday.

But it appears that Hurts’ time is getting closer. There were reports leading up to the game that Hurts would get on the field with Wentz on the sidelines, perhaps for multiple plays in a row.

In addition, Geoff Mosher, who runs the Inside the Birds podcast, reported that team president and CEO Jeffrey Lurie gave head coach Doug Pederson the go-ahead to bench Wentz.

Yet Hurts got in for just two plays, both in the first half. Hurts had 31 snaps in the previous nine games.

The first play came to start the second quarter. But this was different because for the first time, Wentz was on the sideline. The Eagles were called for a false start, so that didn’t count.

Hurts stayed on the field for the next play, and completed a 6-yard pass to Alshon Jeffery.

It was Jeffery’s first catch of the season.

Wentz came back for the 3rd-down play and was sacked. In all, Wentz was sacked six times tonight for an NFL-high 46.

Hurts got one more play in the first half, a handoff to Miles Sanders on 3rd-and-2 that was stopped for no gain. Sanders had just 15 yards on 6 carries. Wentz was the leading rusher with 42 yards.

Up until the final drive of the first half, the Eagles had been outgained in yards 195-4. At that point, Hurts had 6 yards passing and Wentz, who was 2-for-8 at the time, had just 4.

Finally, Wentz got the Eagles going after the Seahawks took a 14-0 lead. The Seahawks’ first TD was set up on Wilson’s 52-yard pass to Metcalf to the Eagles’ 1. The second came on Chris Carson’s 16-yard TD run.

The first first down came on Wentz’s 21-yard scramble on 2nd-and-16. Wentz’s 8-yard pass to Jalen Reagor got the Eagles into Seahawks’ territory for the first time.

Wentz capped the drive with a 3-yard TD pass to Dallas Goedert with 12 seconds left in the first half. Jake Elliott missed the extra point.

The Eagles also put together a good drive to start the second half, getting a first down at the Seahawks’ 17 yard line. But on 3rd down, Wentz was sacked and they had to settle for Elliott’s 42-yard field goal.

Still, the Eagles were within 14-9 midway through the third quarter.

Everything before those two drives was forgettable.

And so was pretty much everything afterward.

Eagles general manager Howie Roseman no doubt got yet another reminder of his colossal mistake in the 2019 NFL draft when he selected wide receiver J.J. Arcega-Whiteside in the second round.

Metcalf finished with 10 catches for a career-high 177 yards Monday. Arcega-Whiteside, who missed his second straight game on the COVID-19 list, has 2 catches for 45 yards this season.

The 177 yards for Metcalf represents more than Arcega-Whiteside had for his entire rookie season (169). Metcalf also had 160 yards receiving against the Eagles in the playoff game last January.

Jason Peters was playing in his 212th game, and in his 17th season, but this was his first ever game at guard. Peters, signed in 2004 as an undrafted free agent as a tight end, eventually moved to right tackle, then left tackle.

But after injuries that ravaged the Eagles’ offensive line, in addition to Peters’ ineffective play last week against Cleveland, the Eagles moved him to right guard. That was the position Peters was supposed to play when the Eagles re-signed him in July.

If you enjoy talking football, we have the perfect spot for you. Join our Facebook Group, The Ruling Off the Field, to engage in friendly debate and conversation with fellow football fans and our NFL insiders. Do the right thing, sign up now!