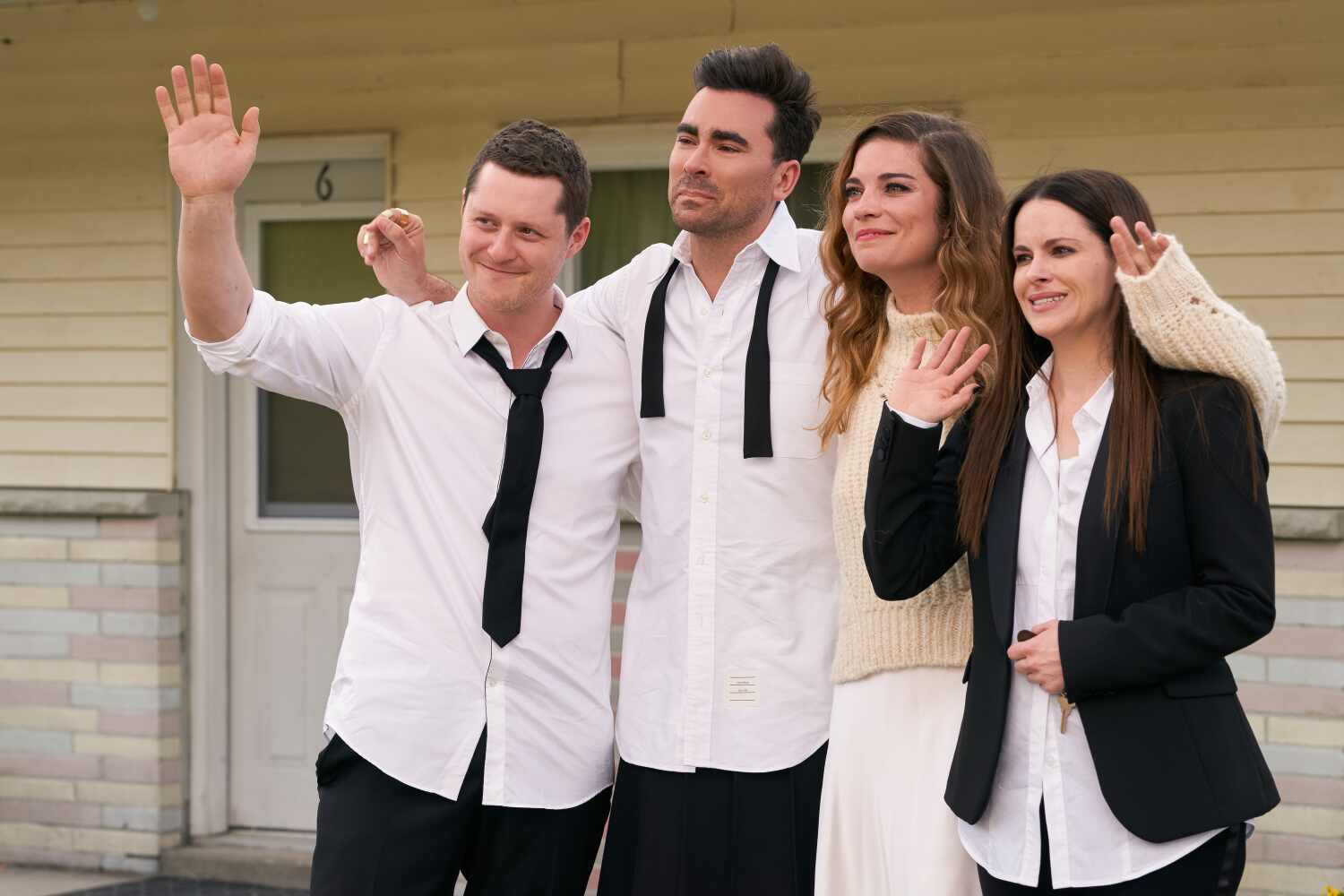 “Schitt’s Creek,” TV’s little engine that could, did.

The series, which premiered here in 2015, a coproduction of the CBC and the American basic cable channel Pop, was nominated for 15 Emmy Awards this year, for its sixth and final season; it Last year, there were nominations for stars Eugene Levy and Catherine O’Hara, for the series and for costume design — none won. But 2020 was a matter of Now or Never. And the time was now. In a big way. Really big.

The first hour of Sunday’s telecast was essentially a tribute to “Schitt’s Creek,” which swept the primetime comedy series awards, with seven. It was named best series. O’Hara and Levy won in the lead acting categories; Daniel Levy, who co-created the series with his father Eugene, won as supporting actor and for writing and directing (with Andrew Cividino); and Annie Murphy scored as supporting actress. , Earlier in the week, the series won for contemporary costumes and casting for a comedy series.

The rise of this plucky little comedy has been told many times now, like a folk tale. At first most notable for starring Levy and O’Hara, two pillars of Canadian comedy — two Canadian pillars of comedy — who had worked together on and off since “SCTV,” it built slowly, then quickly, from a spark to a conflagration. It was the secret you couldn’t wait to share, and then suddenly the thing everyone you know was telling you about. (That is how it happened with me.) Of course, many viewers arrived late. What for some of us has been a journey of years, may for others have been the work of a couple weekends’ binge watching. But it’s still a journey, however fast or slow you take it.

Cocreated by Levy and son and costar Daniel Levy — who play father and son Johnny and David Rose — it’s a show that has grown up as its audience has grown bigger. It doesn’t take a degree in media studies to recognize that Netflix, which began streaming the series in 2017, was the bridge that carried that little engine from beloved obscurity to mainstream mania. (The final season, which premiered on Pop in January, is expected to arrive on Netflix in October.) The Emmys are about recognition — not just in acknowledging the worth of a series or performance but in voters knowing they exist at all — and word-of-mouth has been consistently mighty.

Memes and GIFs, Pinterest pinnings and tweets keep the show in the flow of social media. A flurry of Best Show You Aren’t Watching pieces has too. Dan Levy, as casually stylish as his character is strenuously fashionable — and the series’ showrunner since Season 3 — was profiled last year in GQ; this year, O’Hara was featured, in a glamorous and comical drone-assisted Vanity Fair photo spread. It is for the love of her Moira Rose, a former soap star locked in a singular impression of elegance, that many have pledged allegiance to the show. There has been a lot of that.

It’s only speculation on my part, but that its origins are modest rather than muscular, in the industrial sense, may have been to the series’ ultimate advantage, keeping it free from Hollywood glossiness and crushing expectations. If the show had been picked up by ABC or AMC or HBO, rather than Pop, its early numbers might have not been enough to keep it alive. At the same time, merely being on Netflix, which airs many series that will never be nominated for anything, was no guarantee of success.

But “Schitt’s Creek” really is special. Its message of acceptance and self-acceptance, of welcoming love where it turns up — even within one’s own family — were just what some of us needed in an angry and divided time: a comedy that could reliably afford you a good cry.

That its fandom was based in something more than just appreciation of a well-written, well-played TV show became clear when the cast hit the road to meet its public, beginning in 2018. What they found, in packed theaters and arenas, was a community, bound by the kind of intense emotional identification you’re more likely to encounter at Comic-Con. (A slide show of fan art was part of the first presentation, at L.A.’s Theater at the Ace Hotel.)

Additionally, the show’s appeal has been unusually multi-generational, including older viewers who have grown up on O’Hara and Eugene Levy and the viewers who see the the younger Roses — David and his sister, Alexis (Annie Murphy) — as peers.

There have been other honors on the way to Emmy gold. “Schitt’s Creek” cleans up at Canadian Screen Awards regularly. This year, significantly, it was honored as outstanding comedy series at this year’s GLAAD Media Awards; last year Dan Levy was given GLAAD’s Davidson/Valentini Award, in recognition of his contribution, as showrunner and star, to promoting acceptance for the LGBTQ community: Love is just love in “Schitt’s Creek,” whose series arc leads toward the wedding of David and his boyfriend, Patrick (Noah Reid); Pop celebrated the final season with a Sunset Boulevard billboard of them kissing.

The productive upshot of all this approval was to empower Dan Levy and his writers to go deep and take emotional risks. And what had begun as a (school of) fish-out-of-water comedy developed into something more personal and uplifting, without sacrificing the tension that makes the show as funny as it is. “You want to constantly be pushing the boundaries,” Dan Levy told me in 2018, “and pushing the actors to a point where they’re resting on this precipice, feeling, like, comfortable — but also totally uncomfortable.”

It’s not unusual in such stories for the reluctant newcomers to eventually throw off their old ways and learn life lessons from their quirky new neighbors. What makes “Schitt’s Creek” different, and better, is that the Roses remain very much themselves; the bemusement and frustration with which the family and the townsfolk regard one another is there until the end. But they are less toxic, more trusting, no longer entitled. They are not reformed, because they never needed reforming, only enlarged, deepened and enlightened: They’ve learned to tell false friends from true. They know what love is.

Alexis was always a sunbeam, David a romantic, Johnny a mentor. And Moira, like the woman who plays her, is a star.