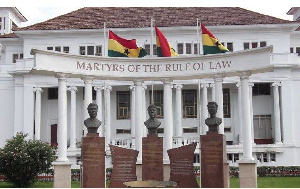 A seven-member Supreme Court panel has dismissed an application for Certiorari seeking a review of the apex court’s own decision to quash a High Court decision on the revocation of the mining lease of Exton Cubic Company limited.

The panel in a five to two ruling presided over by the Chief Justice Anin Yeboah said the reasons for dismissing the application would be ready in a week’s time.

While Justice Yaw Appau and Justice Gabriel Pwamang both granted the application.

It was counsel’s case that the application is premised on Articles 23 of the 1992 Constitution where the fundamental, human rights of the applicant was breached.

Exton Cubic applied to the apex court to review its earlier ruling on a writ brought before it by Deputy Attorney General, Godfred Dame challenging the decision of a high court on the revocation of the company’s lease to mine bauxite in Nyanihin.

The high court in Accra in February 2019 quashed a decision by the then Minister of Lands and Natural Resources Peter Amewu to revoke the mining leases granted to the company.

The Deputy Attorney then appealed the ruling of the high court which was upheld by the Supreme Court.

According to the Apex Court, their decision was based on the firm’s failure to comply with mandatory statutory provisions of the Minerals and Mining Act and article 268 of the Constitution.

The judges also held that the grant of 3 mining leases in favour of Exton Cubic was in violation of the Constitution and section 12 of the Minerals and Mining Act, Act 703.

This led to an ex-parte application at the Apex court by the Attorney General arguing that the lower court’s decision undermines efficient administration of justice.

Godfred Dame, has in the past insisted that the government intends to further pursue the case of the legitimacy of Exton Cubic Group Limited’s permits while concurring with the assertion that the activities of Exton Cubic were illegal.

He also intimated that his outfit will also be looking into the circumstances under which a company with affiliations to Ibrahim Mahama, was granted the mining lease when his brother, John Mahama was President.

“These are matters of monumental importance. We have to even look at the processes, [asking] how come just a week before the handover of power by a real government, the President of the day, through the Ministers will convey a mining lease to a company owned by [the president’s] brother. These are things we have to look at.”

Exton Cubic’s leases to prospect in the Tano Offin Forest Reserve were challenged in August 2017.

The Ashanti Regional Minister, Simon Osei Mensah, ordered the seizure of their equipment because Exton Cubic was said to be prospecting without a permit at the Nyinahini bauxite concession.

At the time, the mining company maintained that the seizure of vehicles belonging to Ibrahim Mahama’s Engineers and Planners (E&P) was unlawful because it was in possession of three required permits.

The company had also complained that it was being targeted by the government for political reasons, due to Ibrahim Mahama’s relations with former President Mahama.

In their suit, the company argued that the Minister’s decision was unreasonable, unjust, and an abuse of his powers.

The company had also complained that it was being targeted by the government for political reasons, due to Ibrahim Mahama’s relations with former President Mahama.

In their suit, the company argued that the Minister’s decision was unreasonable, unjust, and an abuse of his powers.

The company, among others, sought a declaration that “the Minister of Lands and Natural Resources acted ultra vires [beyond] his statutory powers when he revoked Exton Cubic Group Limited mining leases.”

It also contended that revoking of its license was “breach of the rules of natural justice”, and in breach of the company’s “rights to administrative justice and property.