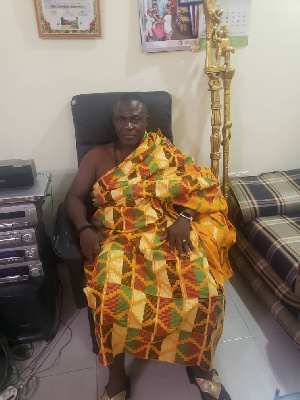 Nene Sipim Narh Tekpertey II of Aklomuase in the Manya Krobo traditional area of the Eastern Region has tasked Krobos to make restoring the former glory of their lineage their top priority in the New Year, 2020.

Nene Tekpertey who recalled the glorious past of the people of Lower Manya Krobo, Upper Manya and Yilo Krobo said Krobos had pride in their tribe and must thus stand up to reinstate the grandeur associated with their ancestry.

“Manya Krobo needs to reclaim its past glory as was the case in the past when the mere mention of the name elicited fame must fight for our heritage,” said the chief.

The chief who expressed concern over the lack of developmental projects and strained relations between various personalities and entities said fixing the errors of the past year was the surest way of reclaiming all lost benefits due the people of Manya Krobo in 2020.

“A lot of things did not go well in 2019 that deprived Manya Krobo of love, peace and unity and its people and chiefs,” said Nene Sipim. “My prayer for this new year is that Krobos will be able to recover all that it lost in the past year by correcting all of its wrongs to appreciate the benefits of the year 2020.”

The Aklomuase chief who regretted the loss of life and several injuries sustained by protesters during clashes with the PDS in February and May 2019 prayed for the peaceful resolution of those differences to ensure peace and development in the area.

Nene Sipim Narh Tekpertey II who observed the unsatisfactory progress of development of Manya Krobo said hopes of the people of improved development under the current government following the change in government in 2016 has not materialized.

“This area is predominantly an NDC stronghold but the people decided to change the government [in the last elections] in anticipation of improved situation in their lives,” Nene Tekpertey recounted.

With 2020 being an election year, the traditional leader who extolled the virtues of peace urged the youth not to allow themselves to be used by politicians to disturb the peace of the country during the process.

He said, “Nobody should give you money as an NPP or NDC youth to go fight your NDC or NPP opponent,” he advised as he called on all aspirants contesting the elections to accept the outcome of the polls while successful aspirants should not turn their backs on the people.

Nene Terkpertey who called on young people to serve as advocates of development, however, cautioned them not to involve themselves in unnecessary and violent agitations but ensure that their leaders deliver on their mandate.

He also cautioned them to desist from drug abuse, drunkenness, immorality and other forms of social vices in the New Year and prayed for the fulfillment of government mandate to the people to inform the electorate in their choice during the 2020 polls.

The traditional leader called for peaceful resolution of all pending chieftaincy disputes in the Manya Krobo Traditional Area, stressing, that cohesion among chiefs was paramount to ensure togetherness in pursuit of common goals.

“Manya Krobo belongs to all of us [Krobos] and so we must unite,” he stressed.

He called on political leaders including the government, MCEs, MPs, etc. to ensure that its mandate of developing Manya Krobo is adequately addressed.

He called on Ghanaians to maintain the country’s sense of unity as it goes into its major elections in December 2020.