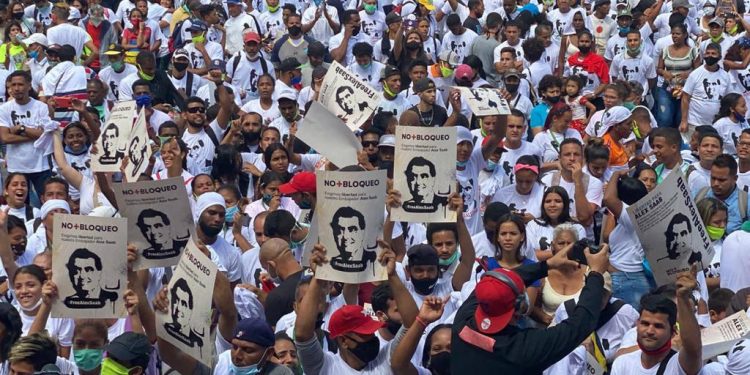 Many Venezuelans attended a protest concert at the Diego Ibarra Square in the capital Caracas, over the continued detention of President Nicolás Maduro’s frontman Alex Saab in Cape Verde.

They questioned the continued detention of the diplomat in Cape Verde and making a case for his release and return to the country.

The thousands of people who gathered for the activity on Saturday were clad in shirts with the inscription #FreeAlexSaab.

They were of the view that the arrest and detention of Mr. Saab is a politically motivated action which must be taken seriously and firm actions taken to get him released.

This is not the first time such a protest is being held in Venezuela on the ensuing diplomatic issue.

In January 2021, a similar protest featuring over 200,000 people in different cities of the South American country.

Mr. Saab has been in the news since June 2020 when he was arrested by Cape Verde police on the orders of the US when his private plane stopped to refuel en route to Iran on official duties for the Venezuelan government.

Venezuela is against the US’ action, indicating that he is a diplomat.

Lawyers for Alex Saab have been fighting to stop the extradition order which the Cape Verde government has already accepted but has not executed yet due to the ongoing court proceedings.

After bouts of legal tussles, lawyers for Mr. Saab succeeded in getting him to be released from prison custody to be held under house arrest.

Among the arguments advanced by the lawyers, they said Mr. Saab urgently needed medical attention which he had not been provided with in prison.

The ECOWAS court in Nigeria is expected to give a judgement on the matter on March 11, 2021.