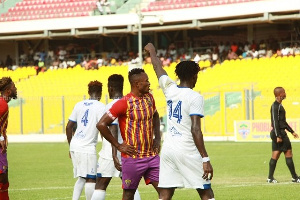 Prince Opoku Agyemang bagged a brace as Medeama SC thumped Hearts of Oak in the matchday 2 encounter at the Akoon Park in Tarkwa.

The top liner of the week proved to be an easy match for the Mauve and Yellow side as Prince Opoku scored twice within the first half mark to in his sides 3-0 win.

Medeama SC couldn’t have wished for a brighter start when they shot into the lead as early as the 2nd minute. They were awarded a penalty after a Phobians defender was adjudged to have handled the ball in the box from a corner.

Prince Opoku Agyemang made no mistake from the resulting kick to give his side an early advantage. He doubled the lead for the Tarkwa based club as they held onto the 2-0 lead to half time.

The second half wasn’t any different as Medeama continued from where they left off, dominating proceedings and once again breached Hearts of Oak’s defence to make it 3-0.

Substitute Nana Kofi Babel put the icing on the cake for the Mauve and Yellow after connecting home from a cross.

The victory means Medeama have claimed the maximum points from the openings two games sending them to the summit of the League standings whilst Hearts of Oak is yet to win a match this season.

Over in Sogakope, WAFA eased past visiting Ebusua Dwarfs with a 2-0 win whilst Great Olympics suffered defeat to Aduana Stars.

Asante Kotoko and Inter Allies both recorded wins against Legon Cities FC and Bechem United on Friday and Saturday respectively.