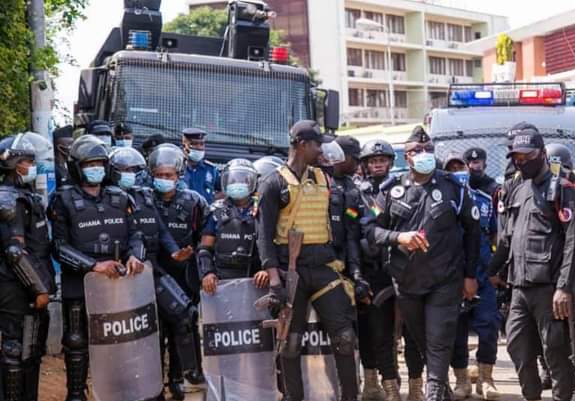 A security analyst, Emmanuel Kutin says the Ghana Police Service must be supported to address its challenges with controlling crowds, especially during protests in the country.

According to him, the incidents of police visiting violence on protestors is becoming too many and there is a need for urgent action to tackle it.

Speaking on GNews on Wednesday, Mr. Kutin expressed regret that some protestors sustained injuries after police fired tear gas and water cannons at them during the Arise Ghana demonstration on Tuesday at the Kwame Nkrumah Circle.

“As a country, we must begin to have an honest conversation. I think the police as an institution has a challenge in managing crowd and since we want to practice democracy, we have to look at how we can help the police in crowd control and management because every now and then, the events have become one too many. We talk about them, and they keep repeating it, and people are losing their lives. Even on Tuesday, a demonstrator lost an eye. Imagine the picture it will paint in the international community,” he said.

Mr. Kutin also urged the judiciary to be cautious in granting injunctions against demonstrations, as it does not augur well for the country’s democracy.

“The judges must be circumspect in the manner they rush in issuing such injunctions ex-parte because it doesn’t go well with the tenets of our democracy at all,” he said.

The demonstration by Arise Ghana on Tuesday, June 28, 2022, turned violent as tear gas and water cannons were fired at protestors.

The protestors also pelted stones at the police, destroying some police vehicles and injuring some officers.

At least 26 civilians were arrested over the incident, while the police reported that 12 of its officers were injured.