Home » Points deduction will not demoralize us 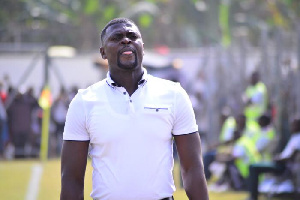 Head coach of Medeama Sporting Club, Samuel Boadu says his outfit will bounce back strongly after they were docked 6 points for allegedly fielding an unqualified player against Accra Great Olympics in match day 12 of the Ghana Premier League.

The Yellow and Mauve were deducted 6 points by the Disciplinary Committee of the GFA following a petition from Accra Great Olympics that the Tarkwa based club had used Nana Kofi Babil who was ineligible for the game after accumulating 3 yellow cards in previous games.

Speaking in an interview with TV3, coach Samuel Boadu said the league is still within their reach since the points gap between them and first place Aduana Stars is just four points.

“Not at all, what I will say is that it’s also a motivation for us and will also help us to work extra hard. Now we have seen that we have lost some points and that doesn’t dampen our spirits because we are going to work extra had to regain our position.”

“I have done my calculations and I have seen that when we deduct six points from our points, we will come to 24, and the one who’ll be at the top now is 28.”

“So even after the deduction it will be just 4 points difference between Medeama and the first place Aduana Stars. This is not a big deal because those teams will come to Tarkwa and we are going to score them and also work hard to win the away matches to compensate for the point deduction,” he added.

The Ghana Premier League is currently suspended due to the coronavirus pandemic. The deadly disease has brought all major sporting activities to a halt at the moment.